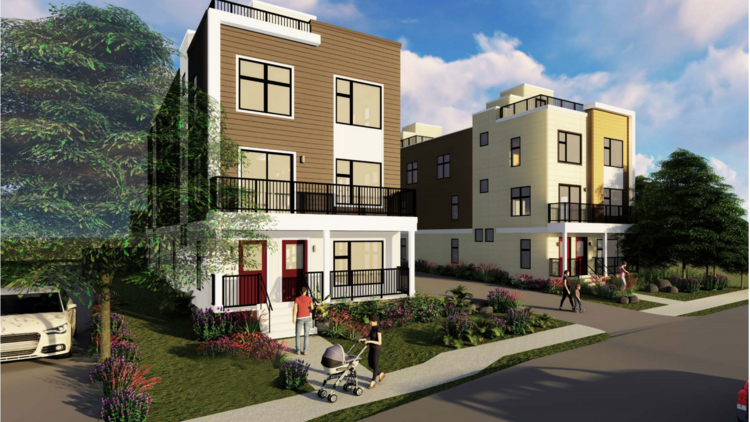 The statewide housing crisis has definitely spawned a number of initiatives and some different approaches.  Earlier this week there was a thought-provoking op-ed in the LA Times, “Holy cow! California may get rid of single-family zoning.”

Kerry Cavanaugh opines: “California may be on the verge of eliminating single-family zoning statewide. This is huge. And it’s a sign of how quickly the politics around housing and land use have shifted in just the last year.”

Of all the housing proposals, SB 50 is probably the one that is most controversial.  It’s original form was SB 827 last year, but that bill died fairly early in the process.  The key provision is that local governments would not be able to block new apartment developments within a half-mile of public transit, and it would ease parking requirements, thus reducing costs.

Senator Wiener has made a number of changes to the bill, including a 15 to 25 percent mandatory inclusionary housing provision.

Still, a lot of housing and environmental groups oppose the measure.   Despite this, SB 50 was able to advance.  What Ms. Cavanaugh points out, however, is part of the deal that Senator Wiener cut was to merge his proposal with that of SB 4 by Senator Mike McGuire from Healdsburg.

She points out that this produces one very big change: all single-family homes could be converted from their current use to a four-unit building – by-right, anywhere in the state.

That is the opposite of what the city of Davis just did with an urgency ordinance, enabling neighbors and residents to have due process when a property owner proposes increasing the floor-area by 40 percent on an existing building.  Prior to that, in the city of Davis, such upgrades were not only by-right, but leaving the neighbors without any due process of law.

Writes Kerry Cavanaugh: “A property owner could subdivide or remodel a house to turn it into four apartments. Or a developer could build a fourplex on a vacant single-family lot. The proposal

wouldn’t allow people to demolish a house and build a new fourplex on the property, however.”

She does caution: “It’s unclear how many property owners could reasonably convert a house to apartments, or whether this proposal would significantly increase multi-family housing in what are now single-family neighborhoods.”

She also notes that there are serious questions about whether this proposal could survive future committee hearings, the Assembly or even get Governor Newsom’s signature.

Originally, SB 4 and SB 50 were seen as competing bills.  Both focused primarily on new housing near mass transit.  One big difference between the two bills was that Senator McGuire, who represents relatively small communities, focused chiefly on cities with populations of 50,000 or greater located in a county with a population of less than one million.

That would include Davis and Woodland, but not Healdsburg where Senator McGuire resides with its 12,000 people.  Thus, it would have been exempt from the previous zoning change.

In early April, SB 4 passed the Senate Housing Committee by an 8-1 vote, with SB 50 passing the same committee by a 9-1 vote.

On April 24, the bills were scheduled to go before the committee again, where they worked out their compromise.

As Ms. Cavanaugh points out: “Let’s just pause on the fact that a bipartisan group of lawmakers voted in favor of a bill that would allow apartments pretty much anywhere in California.”

She continues: “This would be a major change from the status quo. Wiener has said that it’s illegal to build more than a single-family house (plus an in-law unit) in roughly 80% of California’s residential neighborhoods.”

At the same time, perhaps, the proposal is not surprising.  Single-family homes, while not yet going the way of the dinosaur, are not exactly the wave of the future.

And, as Ms. Cavanaugh points out herself, “The political winds have been shifting on single-family restrictions.”

That is across the country.  Minneapolis last year voted to eliminate single-family zoning.  They instead created new rules to allow duplexes and triplexes to be built on lots reserved for one house.

The result is most affordable housing in Davis is now multifamily and rentals.  They will have affordable apartments, with some duplexes and townhouses, but not detached single-family homes.

As Ms. Cavanaugh points out, the policy makes it easier to build communities that are denser and thus more affordable.

Furthermore, they also “help integrate neighborhoods that are still segregated as a result of discriminatory housing practices dating back decades.”  She points out: “Strict single-family zoning was often adopted as a way to segregate neighborhoods without explicitly banning any racial or religious group.”

It’s not just Minneapolis.  They are now looking at doing the same in Charlotte, North Carolina.

She notes that even Mayor Eric Garcetti of Los Angeles, an opponent of Senator Wiener’s proposal last year to open single-family neighborhoods to denser development, is warming to the idea.

He told the Times in early April that “the city was looking at the Minneapolis model of allowing triplexes on single-family lots as a way to build more housing ‘that is also neighborhood compatible.’”

Is this too radical a concept?  Probably.  But you can see how the thinking here is starting to evolve.  And it is not just happening in California.

But the problem that many will have is by making such changes by-right, or in the case of SB 50 by overriding local considerations, you’ve taken a lot of land use discretion out of the hands of local government.

While I can see the thinking behind this, a better approach would be, in my view, to still find more ways to build affordable housing California – which could achieve similar results.  Rather than take away land use discretion from the cities, I think it would be better to find betters ways to finance and subsidize projects.

Right now with the loss of RDA (Redevelopment Agency funding), even allowing for zoning barriers to go down, it seems doubtful that – without finding funding mechanisms – this would produce housing for lower income people currently being priced out of the market.

15 thoughts on “Sunday Commentary: Will California Really Get Rid of Single-Family Zoning?”