The highly skilled staff members, a board of directors made up of local elected officials and an advisory committee of experts from the three jurisdictions are transforming the idea of community choice energy into a reality.

“The Community Advisory Committee is a really powerful group with quite a diverse mix of backgrounds,” says Davis City Councilman Lucas Frerichs, a member and past chair of the VCE board.

The members’ breadth and depth of knowledge makes for a “stellar” bunch, adds Yvonne Hunter, a longtime Davis resident who is one of the CAC’s nine volunteer members. Before her retirement from the League of California Cities, Hunter served as the lead lobbyist for state legislation that authorized cities and counties to create Community Choice Aggregation (CCA) electricity providers.

“It was something I really, really believed in,” she recalls. “And then, it was exciting to go from theoretical legislation that I passionately believed in to helping my very own community decide if community choice was right for us.”

Frerichs says the CAC advises the board on general policy and operational objectives, including strategies to reduce carbon emissions and accelerate local energy resources.

Many of the members transitioned from city or county advisory roles to their new volunteer efforts with VCE. Gerry Braun of Davis, who chairs the CAC, said the committee’s first responsibilities include serving as a “second set of eyes” on energy issues, assisting in community outreach during the launch process and providing advice regarding legislation and regulations pertaining to community choice energy.

Braun himself has been involved in energy for more than half a century, with a particular emphasis on solar and renewables. Currently, he is the director of the Integrated Renewable Energy Systems Network, which serves the growing need for more integrated planning and operation of local energy services in support of community economic and environmental goals.

“I came to a conclusion two or three decades ago — this was before climate change became a real concern — that the changes that had to occur to bring solar and wind on faster were going to be driven by people rather than utilities,” Braun says. “I think I’ve been proven right on that.

Those changes that Braun dreamed of are being embraced by 19 CCAs that serve more than 10 million customers across California. Just 10 months old, Valley Clean Energy is one of the youngest such agencies.

And the passion that he and his fellow CAC members share for community choice energy fuels their involvement. Other members include Vice Chair Christine Shewmaker of Woodland, a plant biologist and passionate climate-change activist; Secretary Marsha Baird of unincorporated Yolo County, who worked 20-plus years as a market research and strategic planning manager in Silicon Valley; Lorenzo Kristov of Davis, who spent 40 years in the energy industry, most recently with the California Independent System Operation (Cal ISO); David Springer of unincorporated Yolo County, who co-founded the Davis Energy Group; Mark Aulman of Woodland, a retired communications professional and ardent environmental advocate; and Christine Casey of Woodland, a UC Davis entomologist with expertise in water and sustainability issues.

A seat representing unincorporated Yolo County is vacant at this time.

Unlike investor-owned utilities, CCEs allow for community engagement and involvement, an “absolutely critical” part of the enterprise, Hunter says.

“Anybody who has an opinion — and a lot of people do — can come and talk to us,” she says of the Community Advisory Committee. “Or, they can go downtown (in Davis) and walk into the administrative offices of Valley Clean Energy and talk to the staff.

“What’s better than that? You combine that kind of access with highly skilled administration and good technical background, and it’s a win-win.”

Adds Aulman, “The beauty of VCE is that it’s ‘effortless.’ As a customer, you don’t have to do anything and you’re already getting 42 percent renewable energy, surpassing PG&E, plus the opportunity to opt up to UltraGreen.” That 100 percent renewable portfolio is offered by VCE for a few dollars more per month.

“In terms of opting up, do the math, look at your bill and opt up,” Aulman says. “That’s the logical next step.”

So, what’s next on Valley Clean Energy’s to-do list?

In the near term, Frerichs says, it’s the implementation of a $2.9 million grant the agency received this winter from SACOG, the Sacramento Area Council of Governments, to build up to 65 electric-vehicle charging stations throughout Yolo County.

The grant also provides for as many as 10 mobile EV chargers and an electric bus serving downtown Davis and the UC Davis campus.

For Braun, the dream includes shaping the energy future of Davis, Woodland and unincorporated Yolo County “better than it is being shaped now.”

“Regardless of what VCE does, the electricity sector will be undergoing profound changes in the next decades,” he says. “Local energy systems will be much smarter and more completely integrated with building energy and local transportation infrastructure.

“VCE could hope to play a crucial role guiding energy customers and their communities through a process that results in greatly increased local energy resilience and much greater local energy self-reliance,” Braun adds.

“The key to growing into this role will be visionary leadership plus financial health and stability that makes sustained local and organizational capacity building possible,” he concludes.

Want to be a part of that exciting future? Attend a Community Advisory Committee meeting and volunteer your time and talent.

Or, if you’re a resident of unincorporated Yolo County — which covers all of the county except the cities of Davis, Woodland, Winters and West Sacramento — apply for the vacant seat and represent the interests of your neighbors and Yolo’s farmers.

Find an application at https://valleycleanenergy.org/wp-content/uploads/VCE-CAC-Description-and-Application-1.pdf.

“As a member of the Community Advisory Committee representing unincorporated Yolo County, part of my role is to make sure the interests of the agricultural customer are considered,” she continues.

“For example, farms use large amounts of electricity to run their irrigation systems, making electricity rates very important to the success of local farmers.” 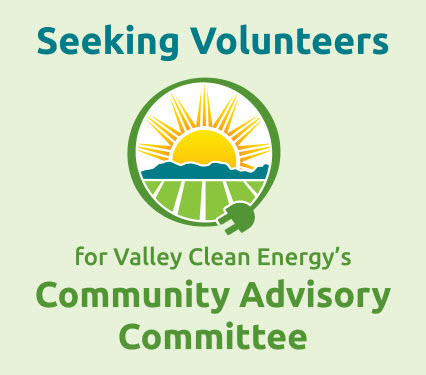