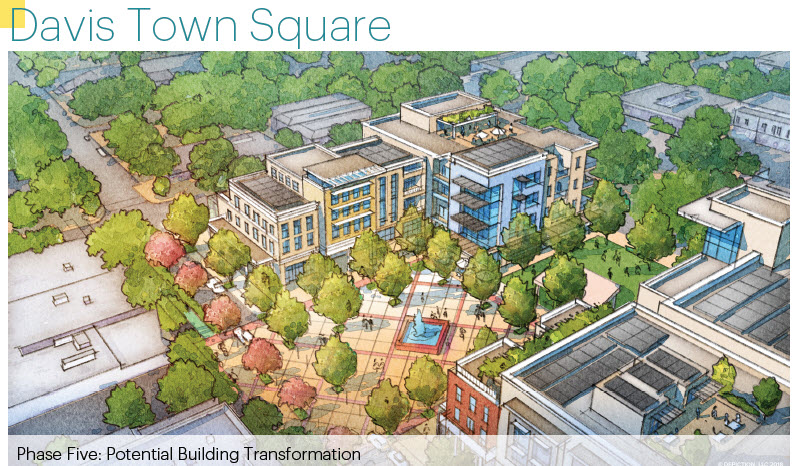 Davis has been moving closer to a draft Downtown Plan that figures to transform the downtown – just how much is open to debate and some believe that the plan we are developing is pretty radical while others believe it has not gone far enough.

There was a good piece this week in “Next City” entitled, “Lessons for Any Downtown: How smaller interventions can reactivate, energize and sustain a city’s downtown.”  The piece, written by Alexander Garvin is excerpted from his book, “The Heart of the City: Creating Vibrant Downtowns for a New Century.”

He argues: “urbanists should have been conceiving of ways to assist the downtown activists who are continuing to transform downtown America by attracting customers, improving services, altering the activities taking place in particular locations, erecting or converting buildings, changing land uses, opening businesses, and assisting the governments that are reducing the cost of

He lists six key objectives, “all of which can be of benefit to any downtown at any time.”

Distinctive image – this might be the key.  A lot of people believe our downtown is a success.  In some ways, it remains so.  But we have seen the decline of retail.  We have seen the shift from retail to restaurants and bars and entertainment.

One of the keys to the Davis Downtown Plan is the creation of public spaces where people can gather.  There is a sense in the community that the downtown remains a special and particularly desirable place – but as I have noted, that is a subjective view.

There are those who see restaurants and great entertainment options, but not everyone does.  Capturing that image is some of the keys to the new vision.

Providing easy access to and circulation – Davis prides itself on the walkable and bikeable downtown.  But many bicycle advocates do not believe that the downtown is that conducive for bicyclists with frequent stop signs and roads largely dedicated to motor vehicles.

The problem in the downtown right now is that during peak hours, the available parking on the surface streets is limited and below ideal.  That leads to recirculation and congestion.

The city lacks the resources to build additional supply, but others argue that the city does not have a supply issue, there are plenty of spaces available, for example at the Fourth and G lot, right now not enough people are accessing it.

Creating a public realm – In the early discussions focused on the idea of a New Davis Town Square with an objective of reinforcing the heart of the downtown.  The idea was, “Create an active and inclusive public realm that promotes civic engagement.”  Along the lines of the first item, “Create a memorable identity for downtown.”   And, “Reinforce a sense of place with appropriate character, balanced historical preservation and thoughtful transitions to adjacent neighborhoods.”

Sustaining a livable downtown – One of the big pushes for the Davis Downtown Plan will be looking at mixed use for the downtown.  As Michelle Byars explained last September, the DPAC’s first goal: “we believe that the addition of residential opportunities in the downtown will serve our community and the adjacent neighborhoods well.”

There is an overall belief that bringing more people into the Davis Downtown will enhance the character and economic activity of the downtown.

As Councilmember Will Arnold put it, “If it makes sense anywhere to incentivize folks doing mixed-use development, it would be my opinion that the downtown is where it makes sense.”

Councilmember Lucas Frerichs stated that “additional housing in our downtown is important for economy.”

“If we can bring additional housing to the core downtown that has a great lack of housing compared to comparable cities like us – you bring people, you bring economic activity,” Councilmember Dan Carson stated.

Reducing the cost – The biggest barrier to redevelopment is cost.  The BAE’s economic analysis, many scenarios do not pan out, but they found that economics improves with density.  For-sale residential may be feasible, on larger lots and/or at higher densities or larger unit sizes.  Office over retail may work in unique circumstances involving high quality tenants.

They note that incorporating parking and/or affordable housing challenges economics further.  In the current environment, “owner-users may develop but returns are unattractive for investor/developers.”

They conclude: “Feasibility challenges in current environment should not preclude planning for change over the next 25-30 years.”

The key question for the DPAC and ultimately the council may not be the vision of bringing more people to the downtown and developing a more vibrant and mixed-use environment, but the feasibility of making that pencil out along with the other goals.

One key idea for dealing with these costs – and a suggestion laid out by BAE – is to make the process as predictable as possible.

Ms. Byars stated, “We are convinced of the need for predictability for projects for the benefit of both the neighborhood and the businesses.” She said that they “are striving to help the consultants as they formulate the form-based codes intended to provide this certainty.”

“I think what investors fear most is uncertainty,” Councilmember Carson stated.

Altering Land Uses – Going hand-in hand with this will be the notion of form-based codes.

As Dan Carson put it: “If through our re-writing the codes, we can mitigate some of the great confusion… but just how do you navigate the planning process to build anything downtown and set up clear rules about what you can build… and clear demarcations about what you don’t want.”

“The Form Based Code provides greater certainty for developers and residents in terms of process and building form,” the consultants write.  “The inclusion of this area will allow for potential development to be analyzed in the Environmental Impact Report for the Downtown Plan rather than having to analyze future projects on an individual basis.”

Bottom line: the downtown plan seems to be very cognizant of these six factors and the city and DPAC are moving to attempt to address many of them.

17 thoughts on “Commentary: How Our Downtown Plan Measures Up”