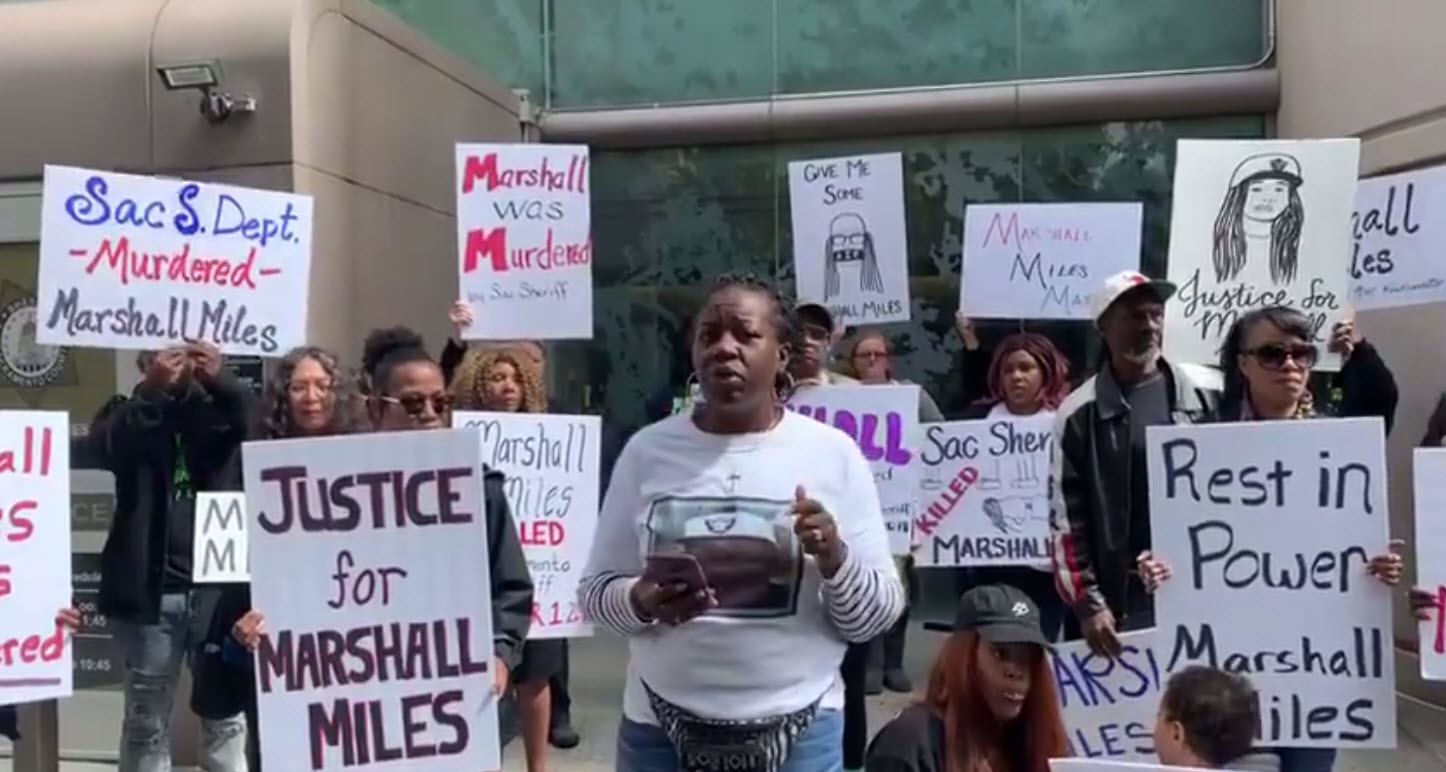 SACRAMENTO – Sacramento County Sheriff Deputies and California Highway Patrol officers hogtied an unarmed man at the county jail and then, although the man yelled he couldn’t breathe, left him in his cell where he stopped breathing and died, according to a wrongful death lawsuit filed in federal court here.

The family of Marshall Miles, a 36-year-old father, announced their filing of the lawsuit at a press conference in front of the jail last week. It is just one of number of lawsuits aimed at the Sheriff’s Dept. or jail filed this past year.

The Sheriff Video – https://youtu.be/JVfX-UKwl2E?t=1400 – is reportedly the first time the Sacramento Sheriff’s Dept. released a video of the death in the jail.

But it showed “deputies smirking,” according to a statement by Black Lives Matter Sacramento. The coroner, said BLM-Sacramento, determined the cause of death was “excessive force.”

The civil action that named the County of Sacramento, Sacramento County Sheriff Scott Jones, the State of California (California Highway Patrol), and Does 1-100 as defendants.

The wife of Miles, Silvia Soto, Miles’ children Marcelo and Marlenie, and Miles’ mother, Latanya Andrews are the plaintiffs in the suit filed by the Los Angeles law firm of Lessem, Newstat & Tooson.

Miles was arrested Oct. 28, 2018, and it was there that abuse, and excessive force began, said attorney Jamal Tooson, in front of the jail when he announced the federal filing of the lawsuit. CHP

officers, according the lawsuit, “violently forced Marshall Miles onto his stomach and drove a knee into his back.”

“Marshall Miles explicitly told officers that he couldn’t breathe. However, no effort was by officers to listen to Mr. Miles’ complaints,” alleged the complaint, noting that when officers carried him to his cell “Mr. Miles cried out again that he was having difficulty breathing. And again, no remedial action was taken by officers to address these complaints.”

In the narrative from the complaint, Miles was slammed – still hogtied – face down on the floor of the cell. But when he was being unshackled, “four attending deputies, in full gear, placed their knees on his back, neck legs and head, and applied pressure using their full body weight.

“While placed in this position, the pressure applied to Mr. Miles’ back and neck area caused his chest and lungs to compress to the point that Mr. Miles could no longer breathe. While this force was being applied, Mr. Miles stopped breathing and lost consciousness,” the complaint alleges.

The lawsuit charges that Miles lost consciousness, and “attending officers failed to even notice that Mr. Miles was no longer communicating or breathing…they continued to apply force while additional officers attempted to remove the shackles from his wrists and ankles…officers left Marshall Miles unconscious and unattended, face-down on the concrete floor of the cell. Before exiting the cell, none of the officers attempted to check Mr. Miles’ pulse or otherwise ascertain his wellbeing.”

Eventually, according the lawsuit, after deputies left the jail they noticed Miles was not breathing. They called medical personnel, but it was too late. Miles would later die on Nov. 1, 2018, at Sutter Medical Center, never having regained consciousness.

Sutter doctors, said the family lawyers, determined Miles suffered “diffuse anoxic brain injury, due to suffocation, which led to brain death.” The lawsuit claims peace officers did not inform medical personnel about the force that been applied to Miles, and that it was “intentional and adversely affected the medical care provided.”

The handheld video of the encounter inside the jail shows officers telling Miles not to struggle, even as he is crying out: “I cannot breathe,” and “Give me some air.” An officer replies, “You’re breathing fine,” minutes before Miles was taken to his cell and stopped breathing.

“We are here for a change in policy, (calling) for transparency and justice, to send a message so this will never happen again here. Marshall was suffocated to death by law enforcement. He repeatedly told officers ‘I cannot breathe’ but no one responded. This was preventable. He was unarmed and posed no threat to officers. This has to end, and we are demanding, with the filing of this lawsuit, that it ends today.”

Sonia Lewis of Black Lives Matter began the news conference at the entrance to the county jail by calling the death of Miles “blatant,” and charging that “excessive force is rampant in this department, noting the death and lawsuits against the jail.

“There are several cases of inmates in this facility held in solitary for months at a time. This jail needs oversight in respect to excessive force. We know that Marshall did not die of drug overdose, but excessive force used by officers. We want change,” she said.