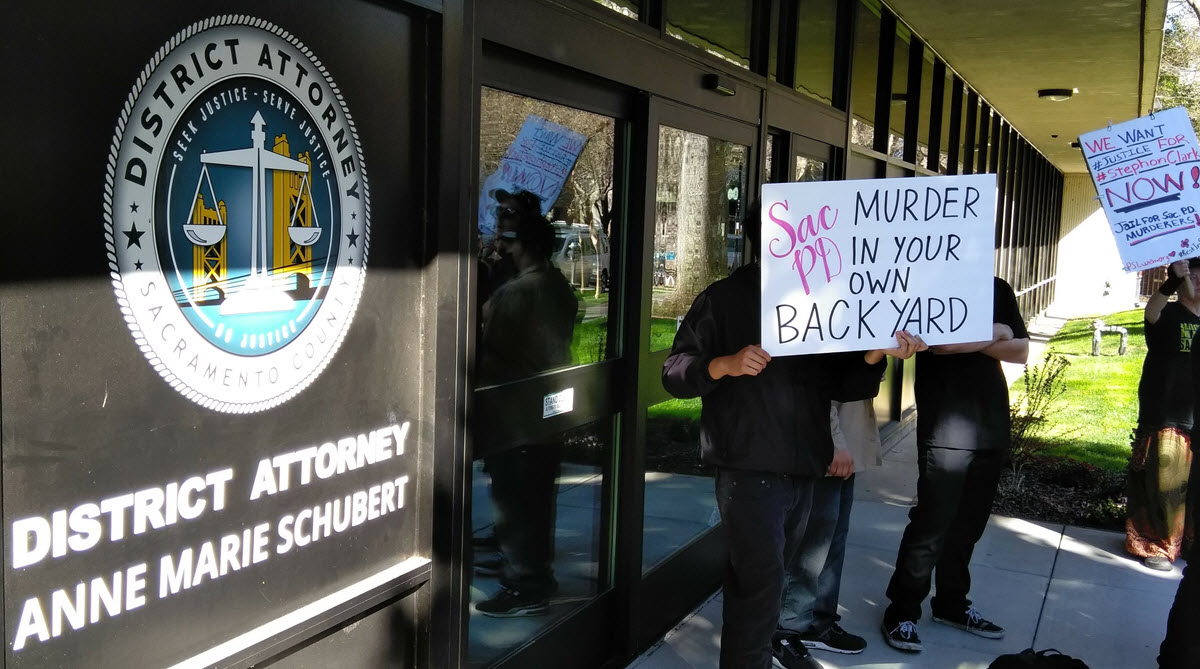 SACRAMENTO – Fallout from the hugely controversial shooting death of unarmed Stephon Clark a little more than a year ago by city of Sacramento police has surfaced here in the form of a long-awaited civil lawsuit in response to the “hit and run” by a law enforcement vehicle of a disabled woman protesting the Clark killing.

The filing is not expected to be the last over law enforcement’s use of excessive force and killings by police – on March 4 of this year, city of Sacramento, County Sheriff Dept. and the California Highway Patrol arrested 84 peace demonstrators, clergy, news reporters and legal observers at the end of a march. All charges have been dismissed and a false arrest lawsuit is expected.

According to the Mark Merin, a civil rights lawyer based in Sacramento whose office filed the suit, demonstrator 61-year-old Wanda Cleveland, on March 31, 2018, was crossing the street directly in front of a stopped Sheriff’s Dept. SUV, driven by Trejo.

According to witnesses, including lawyers, demonstrators and news media, the vehicle suddenly accelerated toward her, striking and seriously injuring Ms. Cleveland, who was hospitalized.

Merin said that Trejo didn’t stop to render aid, “as is required of anyone involved in a motor vehicle injury case, but fled the scene. Cleveland had to be assisted by fellow demonstrators and transported by ambulance for medical care.

“The deputy showed disdain for the safety and well-being of Ms. Cleveland; but the Sheriff Department compounded the offense by ratifying the deputy’s conduct and taking no known disciplinary action against deputy Trejo,” said Merin.

“Adding insult to injury, the County rejected Ms. Cleveland’s claim of misconduct and then threatened to attempt to recover costs from her if she pursued her claim without good faith,” explained Merin in an interview with the Davis Vanguard.

The National Lawyers Guild Sacramento Chapter, which was on the scene of the incident last year, supported Merin’s conclusions, noting that Sheriff Scott Jones’ statements blaming Cleveland and not the deputy were off-base.

“The Sheriff Dept. statement that its vehicle was ‘slow moving’ is dishonest and misleading – the vehicle accelerated rapidly into the pedestrian, and then left the scene of the crime. Further, any statement by law enforcement that injuries to the woman hit and thrown to the ground are ‘minor’ is self-serving,” said the NLG, responding the department’s claim that the injuries were “minor.”

The Vanguard has also been informed by witnesses that a California Highway Patrol vehicle was within 50 to 100 feet of the incident, but refused to help or pursue the Sheriff’s vehicle. The CHP is not named in the suit at this time.

Video of Cleveland being hit, thrown to the ground and rolling into a gutter went viral and was shown by local, national and international news outlets, including CNN and others.

The NLG had a contingent of legal observers at the protest, including several public defenders, who witnessed the incident first-hand. The NLG has strongly criticized the attack on Cleveland on Florin Road, near the 65th Street Sheriff’s substation.

The lawsuit filed by Merin’s law firm was also very critical of Trejo and the Sheriff’s Dept.

“Defendant Miguel Trejo accelerated the SUV toward and into Plaintiff Wanda Cleveland…a pedestrian crossing in front of the SUV and within Defendant Miguel Trejo’s unobstructed field of vision (her) body was violently thrown into the air and then down, onto hard asphalt, injuring Plaintiff’s body and head,” said the lawsuit.

Despite “reactionary screams and cries” by witnesses, the lawsuit explains, Trejo “immediately left and fled the scene of the impact, left Plaintiff Wanda Cleveland on the ground and injured, did not slow down, and continued to accelerate the SUV away from the scene (and) did not stop anywhere near the impact, did not report the impact to the (CHP), and did not make his involvement known to the CHP and/or investigating officers with the CHP.”

The lawsuit lists unreasonable force, civil rights violations, assault and battery, intentional infliction of emotion distress and negligence, among the causes of action. It asks for compensatory and punitive damages against Sacramento County, the Sheriff’s Dept. and Trejo.

Additionally, the suit requests exemplary or punitive damages against Trejo in “an amount sufficient to deter and to make an example of him, because his actions constituted oppression, fraud, or malice resulting in great harm to Plaintiff Wanda Cleveland.”

The NLG said that Cleveland was “mowed down by a law enforcement vehicle,” and that its observers said Trejo’s SUV “burned rubber,” slamming into Ms. Cleveland, knocking her into the gutter where she lay until she was taken to the hospital.

“(T)wo legal observers from the (NLG) – there to monitor law enforcement if they used excessive force or violated the rights of demonstrators – were first-hand witnesses…they are also county public defenders, and were shocked by the action, noting that they’ve defended non-law enforcement people who faced attempted murder, hit and run and assault with a deadly weapon for doing less,” said NLG.

“Our video of the hit-and-run incident clearly shows the pedestrian crossing to the sidewalk in front of a Sacramento Sheriff’s vehicle and almost to the other side of it before the vehicle quickly accelerates, making a loud ‘thud’ sound, knocking her to the ground before then speeding off,” the NLG added.