Last week the city had its first budget presentation for the 2019-20 budget.  Past analysis has shown the city has a deficit not in the current fund balance, but rather in long-term infrastructure needs in excess of $7.8 million per year over the 20 years.

This is especially troubling because many economists believe that, while the economy remains strong now, a recession is probably overdue.

As I will argue shortly – as I have for the past several years – the real challenge will be maintaining the quality of life in Davis into the future.  The immediate future presents challenges as well.  In 2018, voters turned down a parcel tax (the measure received 57 percent of the vote but needed 67 percent) that would have closed a huge funding gap on roads.

The city opted to extend its parks tax which was status quo – the only change was it included a future inflator to keep the tax from depreciating with inflation.  Finally, the city is banking on the renewal of the 2014 sales tax increase (which was supposed to be short-term) in order to maintain its operating budget.

At the same time, the ability of the city to generate additional tax revenue will be limited, as the school district perhaps in November 2020 is expected to put forward their large parcel tax to close their compensation gap.

The infrastructure funding picture really doesn’t change.  Staff notes that the city, since 2015, “has focused on identifying these unmet needs and developing a comprehensive plan for funding them.” 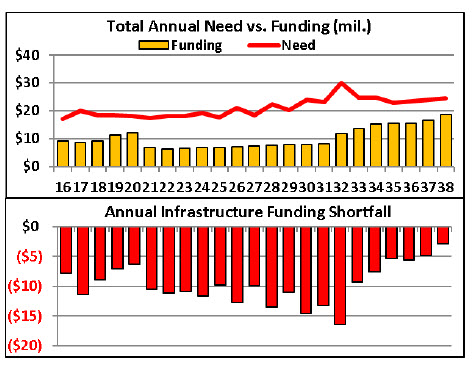 Overall, between now and 2037/38, there is a 222.4 million dollar funding gap.  Staff views this somewhat positively: “The key is that the overall funding level achievable is 50% of the identified total need. Given that most cities have not even attempted to identify their comprehensive infrastructure needs, as Davis has done, this is actually a high rate of infrastructure needs funding.”

Going forward, staff notes: “The most significant fiscal variable is whether or not the 1% Measure O sales tax is renewed by the voters prior to its expiration in 2020.”  Currently that generates $8.7 million in annual revenue (the renewal will represent the composite of the 2004 and 2014 sales taxes at one percent).

Staff writes: “Seeking renewal of the Measure O sales tax will be the primary financial objective of the City in the coming year.”

The problem is that the renewal just maintains the status quo.

The question going forward is how the city will continue to provide its current levels of services while maintaining critical infrastructure – particularly roads, bike paths, and parks.

Back in 2016, a Vanguard analysis (see here), showed Davis lagged behind both regional cities like Dixon, West Sacramento, Woodland, and Walnut Creek, as well as other college towns, in per capita retail sales.

While we have recently discussed the city’s efforts to plug sales tax leakage, in particular through the building of Target, the city remains well behind other communities in overall sales tax base.

For the last six or seven years, we have argued for a three-pronged approach to close the funding gap and make the city long-term fiscally sustainable.

period, if those projections hold.

The second plank has been short-term tax revenue.  As explained above, the city passed a half-cent sales tax back in 2014 and is expected to prioritize renewing it in 2020.  In the meantime, it renewed its parks tax (which is well below ongoing parks needs) and failed to pass a roads tax.  As we pointed out in 2018, it is unlikely that the city can come back to the voters for the roads tax prior to 2022.  That was even before we knew that the school district would have a major parcel tax on the ballot for November 2020.

There is some good news.  The city has issued building permits for the Marriot Hotel, which is nearly completed, and the Hyatt House, expected to get underway shortly.  That combined with the TOT (transient occupancy tax) measure from 2016 could generate additional revenue for the city.  By 2020/21 that is projected at perhaps an increase of half a million.

Also the city has approved a number of cannabis dispensaries and mobile delivery services which could generate tax revenue for the community.  Right now that’s projected at $500,000.

The bad news is that the city was hopeful that the development of innovation parks would also generate additional tax revenue in the longer term.  The city’s success here has been mixed at best.  Voters turned down Nishi with the innovation park in 2016, and then approved it in 2018 without one.

We have seen investments privately from Sierra Energy and the University Research Park, but the city’s analysis from January showed only about 124 acres of available land, and our projection is only about 50 acres of that – somewhat scattered and smaller parcels are actually available in the next ten to 20 years.

Will MRIC (Mace Ranch Innovation Center) emerge to fill that gap?  And if it does, will the voters approve it?  That could be a critical question moving forward, as the city looks to figure out its long-term fiscal stability.

41 thoughts on “Monday Morning Thoughts: Fiscal Picture No Brighter for the City”