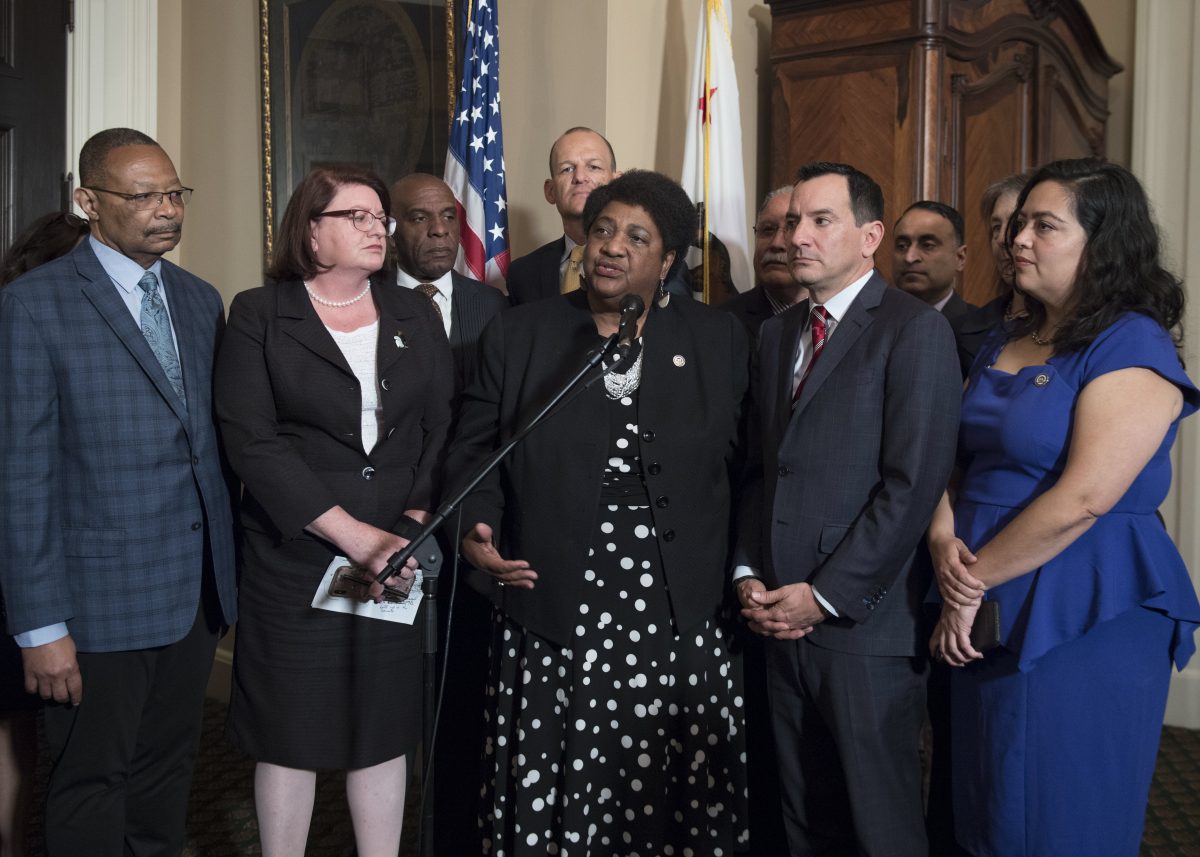 SACRAMENTO – A controversial measure to restrict the use of deadly force by California’s peace officers became a little less controversial this week – and was rewarded with unanimous CA State Assembly approval Wednesday.

However, the passage of the landmark legislation was seen by some as not nearly good enough.

The measure – introduced in the wake of a rash of killings by law enforcement in the state, including victims who were unarmed – was amended just days ago to remove virtually all opposition in the Capitol.

The “new” AB 392 was met by skepticism by some, but overall acceptance.

Victims’ families, and the American Civil Liberties Union (ACLU) applauded the passage by the lower house, calling AB 392 – if OK’d by the Senate and signed by the Governor – legislation that will move California from the state with the “most permissive of use of force laws” to a state with “one of the most protective laws in the country.”

AB 392 requires officers use deadly force only when there is an imminent threat of death or serious bodily injury to them or others. The bill seeks, say authors, to “expand the use of de-escalation and other non-lethal policing strategies by making clear that officers must use other resources and techniques, whenever safe and feasible.” Officers could be prosecuted if they violate the new standard.

Before late amendments were made the measure would have mandated that de-escalation and other forms of force be used before lethal force.

The ACLU, in a prepared statement, noted that “for far too long, California has ignored the problem of police shootings, and the disproportionate killings of Black and Latino Californians and people with

disabilities. AB 392 finally addresses this problem head on with solutions we know work…California would become the only state to combine a ‘necessary standard’ with the requirement that courts consider an officer’s conduct leading up to a use of deadly force when determining the legality of the officer’s actions.”

The bill, which now moves to the Senate for several rounds of hearings, is authored by Assemblymember Shirley N. Weber (D-San Diego) and Assemblymember Kevin McCarty (D-Sacramento).

After passing easily in a key Assembly committee a month ago, SB 392 appeared to stall in the Rules Committee before a last-second deal was made by police unions who has opposed it. As a result of the deal made just before the Memorial Day holiday, police ended their opposition, and both sides of the isle and Governor gave their blessing.

In fact, it was just that deal – the police unions agreeing not to oppose the legislation that they previously had passionately and vehemently opposed – that gives some activists in Sacramento reason to doubt the bill will make any meaningful difference in the number of people, largely those of color, gunned down in the streets by law enforcement.

“I consider the bill to be a sellout and you can tell from the fact that police no longer have an objection to it,” said one prominent Black activist active in helping organize protests around police shootings, including that of Stephon Clark – killed while unarmed in his grandparents’ backyard in March 2018. Clark’s death led to massive protests, including a freeway shutdown, and cancellation of NBA basketball games at Golden 1 Arena.

But, Weber praised the Legislature Wednesday for approving the first change in the state’s use of deadly force laws since 1872.

“I am proud of my colleagues today,” Weber said. “Significant change is never easy, but those who voted today looked to their conscience and found the courage to do the right thing for California. I have to thank the families who have lost loved ones to police violence. They have been the energy and the moral compass for making this possible.”

“It is clear that the time for change is now. California is watching. Frankly, the nation is watching,” said co-author Assemblymember Kevin McCarty. “I am pleased to see AB 392 pass the Assembly. This bill will modernize the use-of-force standard, increase public trust in law enforcement and make our communities safer.”

And, Cephus Johnson, an executive board officer for Families United 4 Justice said bill is a step in the right direction for preventing future deaths. His nephew, Oscar Grant, was killed by BART police in 2009 and was the subject of the film “Fruitvale Station.”

“There is no horror comparable to the excessive use of force by the police that takes your loved one’s life. This horror is forever etched into your memory, perhaps, because it could have been prevented,” he said.

“The vagueness around what is considered ‘necessary’ or ‘reasonable’ for police has been the problem with the use of force policy in the first place. Courts allow police to stop anyone (particularly black people) for “reasonable suspicion” of wrongdoing (Terry v. Ohio, 1967),” said one street activist.

“Courts allow police to stop and detain black drivers for ‘reasonable’ suspicion they violated traffic laws (Wright v. US, 1996). A bill that fails to define what is ‘necessary’ to de-escalate encounters and allows them to continue using what police consider ‘reasonable’ is meaningless. It means there will need to be another murder and non-indictment for lawmakers to realize they capitulated,” he said.

Another activist took a “big picture” view, noting she knows the measure isn’t perfect and that more legislation will be required.

“Every step towards law enforcement accountability is another step closer to the goal, even in its watered down version. Language leaves room for loopholes. But the people are watching so closely that when the first applicable case happens and JUSTICE doesn’t happen there is going to be hell to pay,” she said.

“My son might be alive today if this law had already been in place. It’s been a long time coming since 1872,” said Alice Corley, the mother of Lionel Gibson Jr., killed by Long Beach police officers in 2016.

“I support AB 392. It’s too late for my brother. But it’s not too late to spare other families from experiencing what my family and others like mine have endured,” said Jennie Ruiz, sister of Charlie Salinas, killed by Sanger Police Department officers in 2012.

The legislation moves to the Senate now, and if the attitude of Senate President pro Tempore Toni G. Atkins (D-San Diego) means anything, its chances are good.

“Today’s Assembly vote on AB 392 is proof positive that real change can happen. AB 392 will end preventable deaths and do so without jeopardizing the safety of law enforcement officers. It was long, hard work, but I am proud to be part of the effort with Assemblymember Shirley Weber, law enforcement, victims’ families and others to find a path forward on use-of-force. I look forward to hearing AB 392 in the Senate,” Atkins said.

Share:
Tags:AB 392ACLUKevin McCartyPolice Use of ForceShirley WeberStephon Clark
Previous : Arson Case in Woodland Will Go Forward
Next : Commentary: We Can Blame the Judge If He Gets the Law Wrong

6 thoughts on “Not Perfect, but Cop Deadly Use of Force Measure Gets OK by Assembly”