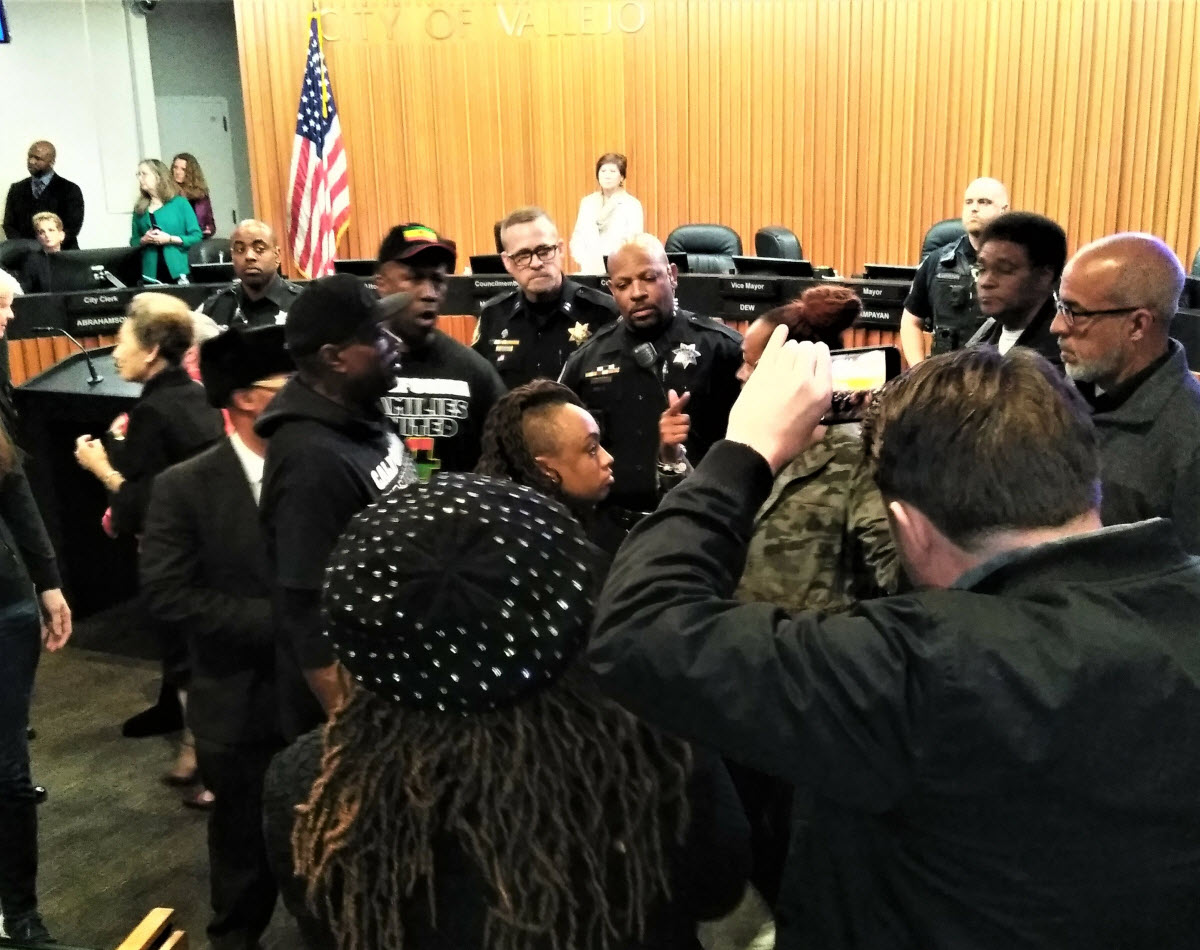 VALLEJO – With the continuing “nightmare” – as many describe it – of unarmed residents being killed by law enforcement through the state, U.S. and Northern California, yet another community responded this week with a strong statement of outrage.

The Vallejo City Council was forced to empty its chambers at a regularly scheduled meeting Tuesday, using more than a dozen armed and body-armored city police to force more than 100 residents to leave when a public comment portion became verbally combative.

Interestingly, it wasn’t a member of the community protesting police violence who sparked the near melee. Instead, it appeared to be a city staff member who interrupted community speakers that then led to the meeting shutdown. The meeting was resumed 30 minutes or so later.

At the heart of the protests – at least the second such demonstration at a Vallejo city council meeting in a month – were the police killings of Ronell Foster, Angel Ramos, and Willie McCoy – three killings in three years. McCoy was shot 25 times last Feb. 27 by six Vallejo police officers while he slept in his car.

Sacramento, as well as other cities in the North State, was rocked in March 2018 when unarmed – except for a cellphone – Stephon Clark was killed by Sacramento police officers as Clark attempted to enter the back door of his grandparents’ home, where he lived.

Other deaths in the last few years as a result of actions by Sacramento law enforcement has led more than a year of unrest, including freeway occupations and near-riots at city council meeting – in the Capital City.

At a press conference outside Vallejo City Council chambers, speaker after speaker put the Vallejo police and elected politicians on notice, and graphically outlined grievances.

“We are standing in solidarity with the families of Willie McCoy, Ronell Foster and Angel Ramos and the countless other families who have lost their loved ones to police murder here in the city of Vallejo. We are making a request to the Attorney General (Xavier) Becerra to immediately launch an investigation into the Vallejo police dept. We are appealing to Gov. Newsom to ask his constituents how they feel about police murder in their communities,” said Jamila Land.

She asked the governor to support AB 392, a measure now in the state legislature that would require police to consider nonlethal forms of force – de-escalation among them – before using lethal force. If approved, the bill would be the first change in force of use laws in the state since 1872.

Land said the Vallejo PD is “not only murdering our loved ones, but terrorizing the community,” noting that three members of McCoy’s family have “been murdered and harassed” by Vallejo police, including an assault on his cousin, and his niece, who was handcuffed to her steering wheel and then tazed.

McCoy was “executed by a six-man firing squad…a brutal execution of a sleeping man. We are demanding something be done. We are tired of losing loved ones to state sanctioned murder,” Land added, who said Vallejo has spent “$4.5 million” in civil rights claims in recent years.

“Far too many families have seen their loved ones harassed, beaten, unjustifiably jailed and killed. (The City of Vallejo) delay, coverup and deny, they put out smear campaign to victimize the victim and put out video to mislead the public. This is the pattern and practice here in city of Vallejo. The usual way of doing business is over…we’re calling the state’s top cop to get to the business of doing the peoples’ business,” said Adante Pointer, a Bay Area civil rights lawyer.

And Cat Brooks, executive director of the justice teams network, cofounder anti-police terror project, said that the city of Vallejo now has the dubious “title” of the “brutal, corrupt, vile and violent” police department in the Bay Area. She warned that organized groups in several cities – Vallejo, Sacramento, Oakland – are working “so black and brown people and indigenous people can walk streets of Vallejo without being worried about being gunned down in their sleep.”

Another lawyer working with victims is Melissa Nold – an attorney with the John Burris Law Office, which represents the families of McCoy, Foster and Ramos – said “We are not just asking, but begging the Attorney General to come in… people are dying. They are abused and being arrested,” joining “a club no one wanted to be in. It’s the AG’s job to come in when city refuses to police itself.”

“This is ridiculous. Nothing is being done by the department of justice, the mayor. They don’t care (and) they’re laughing at us. This is a racist problem. What do you do when you’re bullied every day? We’re tired of it. not asking any more, we demand something be done. People need to support AB 392,” said David Harrison, a cousin of McCoy.

The aunt of Ronell Foster, Angela Giles blamed McCoy’s death on the delay getting video of her nephew’s death, charging “If it (video) had been released in a timely manner, that child (McCoy) would not be dead.”

She added that police said they were going to educate (Foster) who was allegedly stopped for riding a bike without a light.

“His education was death, clear as day,” she said, insisting that Foster was on his “hands and knees, cowering and shot in the back. It was murder. The attorney general, district attorney and mayor…all of your hands are bloody with Willie McCoy’s blood.”

Members of the Vallejo city council didn’t return calls for comment, but many of them not only listened intently to the speakers, but expressed off-the-record concern about the situation. That hasn’t necessarily been the case in Sacramento when the city council was confronted by angry community members.

Newly minted councilperson Hakeem Brown, who some in the audience called a “sell-out,” told the Vallejo Times-Herald that he disagreed with the “approach” of the demonstrators, and wanted to have “constructive dialogue” by meeting with families and community members

Vallejo also announced it would be holding a community forum May 23 to take input from the community on the hiring of a new police chief. The current chief leaves June 30.

Share:
Tags:Cres VellucciPolice ShootingWillie McCoy
Previous : SB 50, Controversial Housing Bill Killed For At Least Another Session
Next : Parents, Students and Community Leaders Come Before the Board Pushing for Ethnic Studies