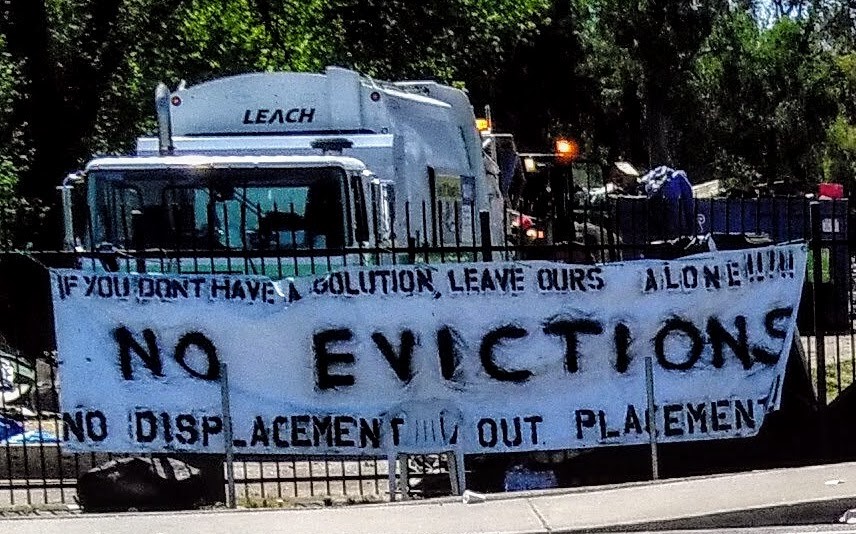 SACRAMENTO – Rumors Wednesday here at a dramatic raid of a large homeless camp suggested that it would be a “gentler” action than other rousts of the homeless, focused more on helping the homeless and preserving some of their dignity.

Not the case at all.

There were two arrests, demonstrators and news media were roughly pushed around by law enforcement. and one woman’s arm was reportedly broken, and she was taken away in an ambulance.

Around 8:15 a.m. Wednesday, shortly after a Sacramento County Supervisor left the scene at 5700 Stockton Blvd in south Sacramento, an estimated two dozen Sacramento County sheriff cruisers and 40-60 black-clad deputies descended on about 125 homeless residents in the makeshift campground.

In a few hours, more sheriff vehicles and SWAT team – along with dump trucks, the “claw” and other vehicles – would join the fray to almost completely transform the camp to the barren lot it was before homeless, with nowhere else to go, “adopted” it.

But it wasn’t without some real tension. Dozens of protestors blocked the gates leading into the former motel, but the overwhelming force of baton-wielding, riot-clad deputies eventually closed the gates and padlocked them shut.

That was, though, only after a tense standoff at the steel gates that advocates held open for a long while. They left when they were about to be arrested.

As to who asked the Sheriff’s Dept. to make such a show of force – the dragnet closed down Stockton Blvd. from Fruitridge south for several blocks virtually all day – wasn’t clear.

Supervisor Patrick Kennedy, who was at the site before 8 a.m. and later came back after lunch, said he would “own” part of it. But it appeared the Sacramento Housing and Redevelopment Agency (SHRA) and maybe the county asked the Sheriff to roust the unwanted residents.

“This (site) wasn’t sustainable, but I understand now there is a new self-governing group for the homeless here (and) I have my eyes on this site,” said Kennedy standing in front of the Stockton Blvd. site, heavily-guarded by dozens of deputies later Wednesday.

“We urge you to work with the community provide a safeground…people here don’t want a tent city but they need a first step,” said Merin, who, trying to broker a deal, called for a “political leadership decision” in a “rational way” to find a place for the homeless to call home.

“What’s happening today is no solution at all, and no way to deal with the homeless crisis. Deputies roaming through the encampment, using brute force is no solution,” insisted Merin. “We need to find not a container village but a place so people have privacy and can improve themselves.”

At the behest of SHRA, the Sheriff’s Dept. posted notices reportedly Sunday for the homeless to clear the area – SHRA said it’s going to build something sometime in the future there.

In the end Wednesday, many homeless were allowed back into the site to retrieve some of their few worldly possessions – tents, sleeping bags, canned food. But the trash haulers from the county collected dumpsters full of garbage and possessions. Autos and even a motorhome were towed.

Homeless advocates, frustrated by the overwhelming show of force, were visibly angry at how the homeless were being treated, leading to skirmishes with deputies.

The two people arrested for failing to disperse – although dozens of other people also did not disperse when ordered to do so and were not arrested – have a July court date in Superior Court.

Share:
Tags:ArrestsCivil RightsCres VellucciHomeless CampProtest
Previous : My “BigDOG” Bear sent $15 to fight hunger, it cost him nothing, you can do it too!
Next : Attorney Talks about Acquittal of Client in Sex Abuse Case