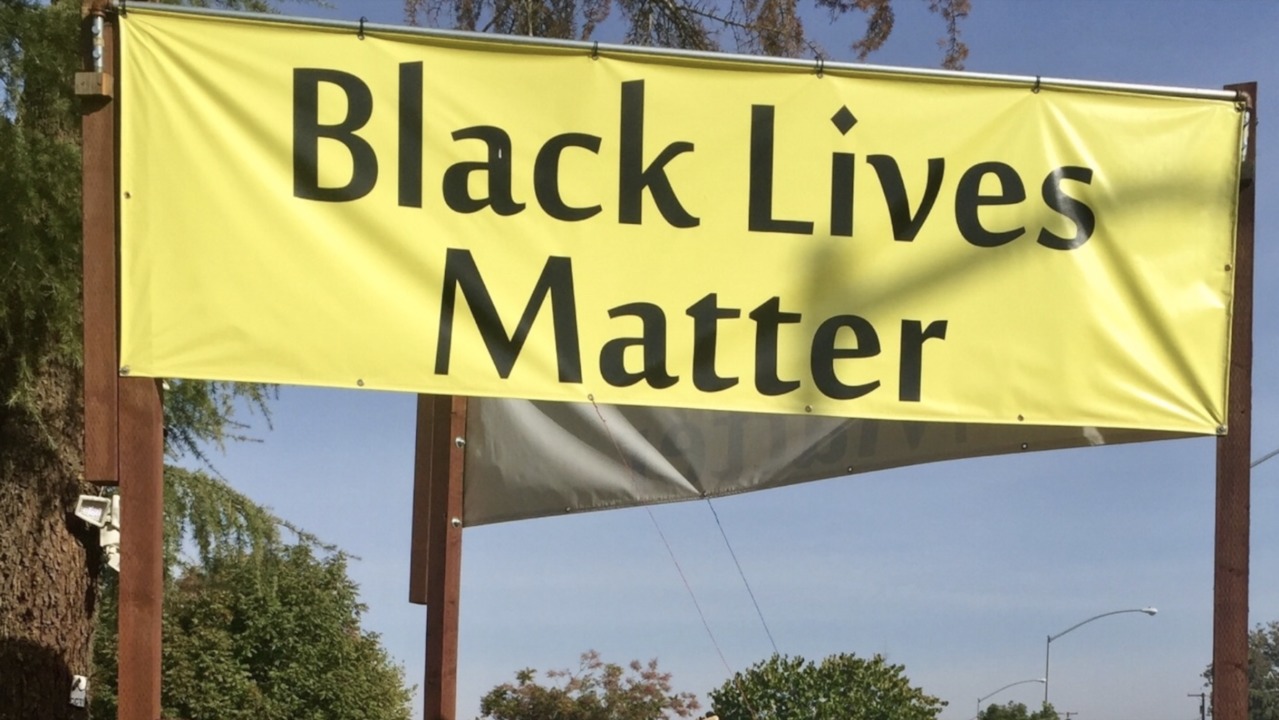 (From Press Release) — The ACLU Foundation of Northern California today filed a lawsuit against Fresno County’s chief elections official for her illegal removal of a polling place at Unitarian Universalist Church of Fresno – for the sole reason that the church refused to cover up Black Lives Matter banners on the property.

The suit argues that Brandi Orth, Fresno County Clerk and Registrar of Voters, violated the church’s right to Free Speech.  The election official ordered the polling place moved to another church, claiming that the Black Lives Matter banners prevented Unitarian Universalist Church from being a “safe and neutral” voting site in the November 2018 elections.

“The records show that she took this illegal, retaliatory action based on one person’s racist complaints,” said Mollie Lee, a senior attorney with the ACLU Foundation of Northern California. “Local registrars are at the front lines of democracy and have a critical responsibility in conducting elections fairly. It is important for them to fulfill that responsibility in a way that is not influenced by implicit or explicit bias.”

The ACLU lawsuit is seeking an order that would prevent the registrar from disqualifying the church as a voting location because of Black Lives Matter signs on its property.

California election laws state that materials related to a campaign or candidate must be at least 100 feet from a polling site. The Black Lives Matter banners are 200 feet from the church building near

the street and weren’t electioneering because they weren’t advocating for an individual or issue on the ballot.

The banners were on display when Unitarian Universalist Church served as a polling place during the June 2018 election. And indeed, voting turnout at the site was well above the county average. There were no reported incidents of any kind.

But prior to the November elections, Orth received a complaint from a resident who called Black Lives Matter “a known domestic terrorist group” and pressed for the banners’ removal. Orth asked the church to cover up the signs or take them down for election day. When the church refused, she moved the polling place to CrossCity Christian Church.

“We refused to cover our banners because they are a theological, civil rights statement and we were practicing our First Amendment right to free speech,” said the church’s minister Rev. Tim Kutzmark. “The sad part is that banners that simply affirmed the worth and dignity of black people made someone uncomfortable. This statement does not say other lives don’t matter. It says all lives will matter when American society values black lives as much as it values white lives.”

The church has displayed the banners continuously since the white supremacist rally in Charlottesville in 2017 to express the church’s belief in the inherent dignity and worth of every person – part of Unitarian Universalism’s national Side With Love campaign. The church’s signs had been posted on poles three feet high, but after they were vandalized several times, the church elevated the signs out of vandals’ reach.

Rev. B.T. Lewis II, pastor at Rising Star Missionary Baptist Church and a member of the Faith in Fresno Clergy Caucus, said the interfaith group hopes to highlight systemic, pervasive racism in Fresno. “The registrar’s actions were inherent to a community that repeatedly expresses disdain for African Americans and we want to support Universalist Unitarian Church in their quest for justice,” Lewis said.

The Faith in Fresno Clergy Caucus is an interfaith coalition of leaders from the Muslim, Jewish, Baptist, Episcopal, Catholic, United Japanese Christian, United Church of Christ, New Thought and other faith communities.

The lawsuit was filed in the Eastern District of California.

The complaint can be found here.