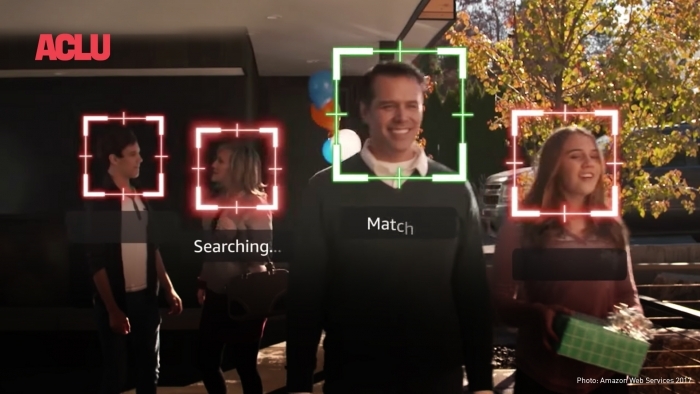 Axon, a maker of officer-worn body cameras used by many United States police departments, today announced that it will not add facial recognition systems to those devices.

This announcement comes as the California Legislature considers the ACLU-sponsored Body Camera Accountability Act (AB 1215), a bill that would prohibit the use of facial recognition and other biometric surveillance on law enforcement body cameras, and as the Massachusetts Legislature considers its own legislation halting the government’s use of these systems.

Matt Cagle, Technology and Civil Liberties Attorney at the ACLU of Northern California, said in a statement, “Body cameras should be for police accountability, not surveillance of communities. One of the nation’s largest suppliers of police body cameras is now sounding the alarm and making the threat of face surveillance technology impossible to ignore.

“The California legislature, and legislatures throughout the country, should heed this warning and act to keep police body cameras from being deployed against communities,” he said.

He added: “The same goes for companies like Microsoft and Amazon, who also have an independent obligation to act, as Axon did today. Face surveillance technology is ripe for discrimination and abuse, and fundamentally incompatible with body cameras — regardless of its accuracy.”

last month by the California Assembly.

Body cameras were promised as a way to hold police accountable, not as surveillance systems to be used against the public.

Unfortunately, body cameras are now at risk of being paired with face surveillance technology – despite the fact that face recognition algorithms routinely misidentify people of color and women.

Face-scanning body cameras would be a dangerous, radical expansion of police powers at a time when our top priority should be creating new approaches to public safety that work for all of us.

AB 1215: The Body Camera Accountability Act, introduced this year by Assemblymember Phil Ting (D-San Francisco), will prevent California law enforcement from adding face and other biometric surveillance technology to officer-worn body cameras for use against the public in California.

AB 1215 is a common-sense bill which rightly concludes that keeping our communities safe doesn’t have to come at the expense of our fundamental freedoms. We should all be able to safely live our lives without being watched and targeted by the government.

“Without my bill, face recognition technology can subject law-abiding citizens to perpetual police line-ups, as their every movement is tracked without consent. Its use, if left unchecked, undermines public trust in government institutions and unduly intrudes on one’s constitutional right to privacy. AB 1215 is an important civil rights measure that will prevent exploitation of vulnerable communities,” said Ting.

Digital privacy has increasingly become a concern among Californians. In a March 2019 American Civil Liberties Union (ACLU) poll, 82 percent of likely voters statewide and 79 percent in the Bay Area disagreed with the government being able to monitor and track a person using biometric information. Such support is not surprising, in light of reports that technology developed by the U.S.’s top online retailer falsely identified 28 sitting members of Congress as people who have been arrested for crimes. The CEO of the largest provider of body cameras has also stated that facial recognition technology was not accurate enough to be deployed on his company’s products.

“Body cameras should work for the people, not against the people,” says Matt Cagle,. “Face-scanning body cameras would be a dangerous, radical expansion of surveillance powers at a time when our top priority should be creating new approaches to public safety that work for all of us.”

Local Bay Area cities are also troubled by the implications of this still imperfect technology and are set to take action against its use. The San Francisco Board of Supervisors will vote on a proposal May 14 that bans local agencies from purchasing or using facial recognition technology. Oakland is also considering a similar prohibition. Both proposals go further than AB 1215, which only applies the ban to police-worn body cameras.