A poll released by DJUSD shows that passage of a parcel tax at the level of $198 per parcel is close to, but not exceeding, the two-thirds threshold needed for passage.  All the polled parcel taxes are about in the same range, with around 62 percent support and another two to three percent leaning toward supporting the proposal.  Thirty-one to 32 percent are opposing such measures.

The poll was performed once again by EMC Research, the company which has performed a number of surveys for the district over the years.  The survey was conducted from May 7 to 13 with 611 interviews.  Voters were contacted for phone interviews via landline and cell phone, and asked to complete a web version of the survey via email and text invitation.

The margin of error was plus or minus four percentage points.

They split the sample into two – with a flat $198 per parcel tax and 10 cents per square foot tax both surveyed and finding remarkably similar results.  The support for the square footage tax was very slightly lower, interestingly enough, with 58 to 59 percent support (depending on when the tax would be – November 2020 or March 2020), and a five percent lean as opposed to 62 percent support with a two to three percent lean for the flat rate – the more traditional measure.

Question for the flat parcel tax: “To maintain quality education in local public schools by attracting and retaining high performing teachers and educational staff, providing training, resources and classroom support, and sustaining strong academic programs in reading, writing, math, the arts and sciences, shall a Davis Joint Unified School District measure to levy $198 per parcel per year, until repealed, adjusted annually for inflation, be adopted, raising $3,000,000 annually with exemptions for seniors and others allowed by law, with no funds for executive management?”

area per year, until repealed, adjusted annually for inflation, be adopted, raising $4,200,000 annually with exemptions for seniors and others allowed by law, with no funds for executive management?”

Some of the key findings include the fact that voters “acknowledge the high quality of education provided by local schools, and the vast majority believe investing in quality schools is worthwhile, even if that means raising taxes.”

The support for the $198 parcel tax is “very similar to previous polling” and comes “very close to the two-thirds threshold for passage.”  They note: “Support for a square footage parcel tax measure is slightly lower than support for a flat tax measure. Confusion about how the measure works, or how much it costs, could make it more susceptible to opposition.”

They also note: “Voters’ priorities are clear – they want the District’s focus to be on keeping quality education through quality educators, and maintaining strong academic programs in reading, math, the arts and sciences.”

Other findings are interesting.

Overall ratings are good, except on the management of district monies.

That number drops further for the overall job that the district is doing, with 63 percent rating it good or excellent but just 19 percent rate it excellent.

Where the district continues to do poorly is with management of district monies, as 31 percent think good or excellent with just five believing excellent, and 35 percent believe fair or poor with 34 percent not knowing.  Those are similar numbers to the last poll.

The tax sentiment ratings remain steady for the most part, and here the results are fairly mixed. 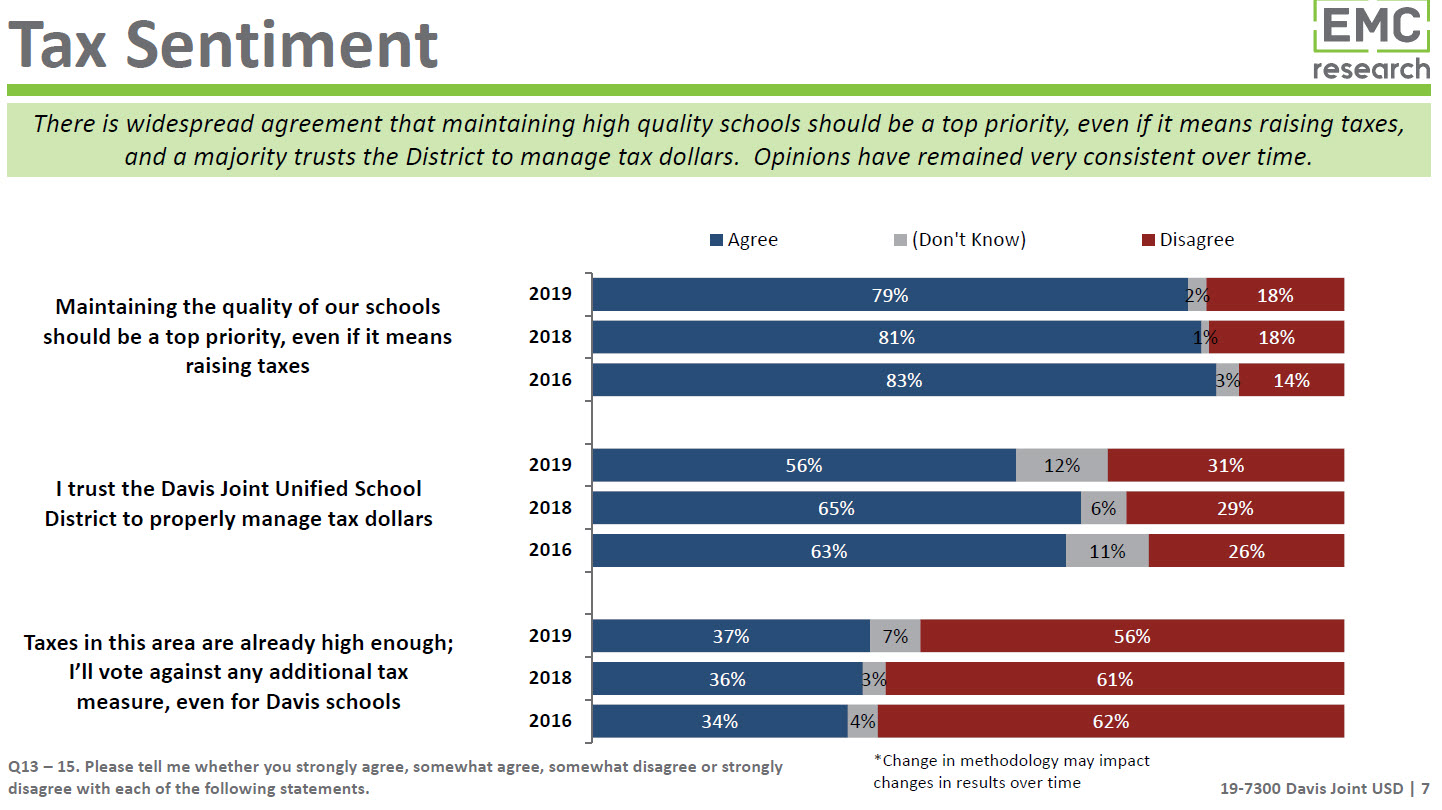 The good thing is that the question “Maintaining the quality of our schools should be a top priority, even if it means raising taxes” remains solid.  Seventy-nine percent support, but that is slightly down from previous polls.

More concerning is the drop in agreement with the next question: “I trust the Davis Joint Unified School District to properly manage tax dollars.”  That score has fallen from 65 percent last year to 56 percent this year.

The last area is steady, but concerning: “Taxes in this area are already high enough; I’ll vote against any additional tax measure, even for Davis schools.”  The number is 37 percent, up from 36 percent last year and 34 percent in 2016.

They also measure components – the district gets the highest scores for “Maintaining quality education in local public schools,” and “Sustaining strong academic programs in reading, writing, math, arts and sciences.”

Second, they argue: “Increasing awareness about how a parcel tax will maintain quality education in local schools by attracting and retaining outstanding teachers and educational support staff would be essential to solidifying support.”

Third, they argue: “A flat parcel tax measure appears to be slightly more digestible to voters, as a square footage measure may be confusing.”