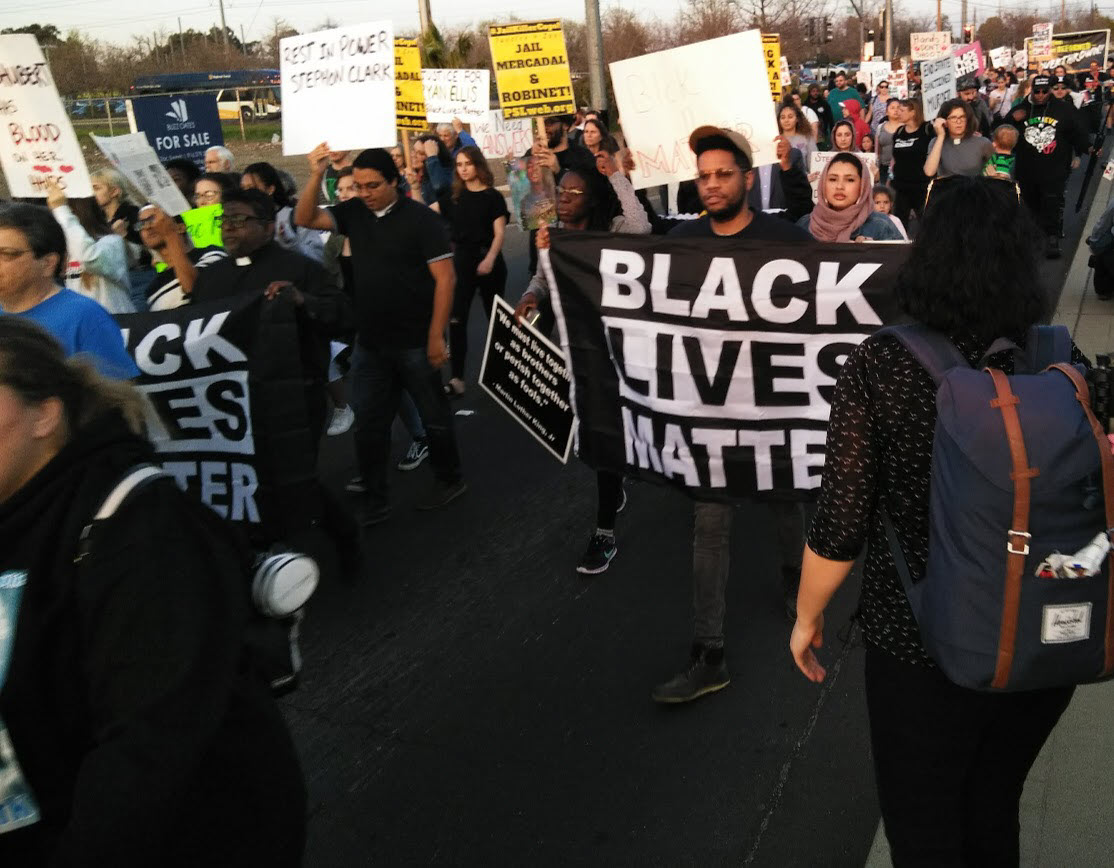 SACRAMENTO – There may, or may not be, a dirty cop behind a simple traffic stop of a Black driver and his family that turned into a police dragnet with a family claiming it was brutalized by Sacramento police.

And the Sacramento County Public Defender’s Office did its best recently to dig into complaints against the officer or officers involved. But, despite having strong suspicions of wrongdoing, the PD office was thwarted when a judge granted the so-called “Pitchess” motion to look into the files of the arresting officers –  but then said, essentially, nothing was there.

However, just a few blocks down from Sacramento County Superior Court, Black Lives Matter Sacramento advocates related story after story about one of the officers named in the motion, and his “harassment” of people of color in South Sacramento. One mother said she filed a complaint a few months ago against him, and the insurance company representing the City of Sacramento already had called wanting to settle.

But, Caleb Macon, the Black driver arrested for “obstructing” a peace officer about a year ago, will have to settle for the sealed file when he goes to trial later this month – although his lawyers said they will be doing their own investigations.

The Peace Officers’ Bill of Rights protects the personnel files of officers like Sacramento Police Officer Mustafa Mohammad – a subject of the Pitchess motion – even though complaints may have been filed against him, and may

affect his credibility in court.

Some critics say that POBR may go too far because judges don’t want to open officers’ files to expose them and their credibility, or lack thereof.

Many defense lawyers believe a Pitchess motion is a valuable tool, and should be filed whenever a resisting arrest charge is leveled – as it has been against defendant Macon – because often those charges are filed largely to ensure the defendant will be precluded from bringing a civil rights action against the officer for violation of the defendant’s rights.

Macon’s case is a good example – he faces years in jail after a simple traffic stop morphed into something much bigger. Rather than just being cited, Macon was handcuffed and arrested, along with his wife and brother. Now Macon, who is Black, is charged with two counts of resisting arrest for delaying, resisting or obstructing a peace officer. Each count carries with it as much as one year in jail.

How did a simple traffic ticket escalate to multiple arrests, traumatized children and a jury trial?

Black Lives Matter Sacramento maintains Macon and his family, including his daughter, were “brutalized” by the Sacramento Police Dept. in yet another example of the SPD’s targeting of Blacks in the community, noting the high number of Black men – including Stephon Clark,  who was unarmed – killed by Sacramento city police or county sheriff’s deputies.

A dramatic video of the incident provided by “Cop Watch” – and obtained by the Vanguard – appears to show SPD officers making the arrest of Caleb Macon, and then turning to arrest his wife and brother, all while a child cries in the background.

Initially, Caleb Macon, apologizing to police for asking them questions and maintaining his innocence, is handcuffed. Then his brother, checking the status of his sibling, is handcuffed and then police target Caleb’s wife Lashaun Royal, and arrest her – she also suffered a concussion and had her hair pulled out by SPD, said BLM. The family’s teen daughter is shoved to the ground.

The Public Defender’s Office motion isn’t shy about suggesting officer Mohammad could be a problem cop, noting that he and partner Jaguar Helper used excessive force and made a false arrest. And lied about it.

The officers were “untruthful” in their versions of events, claims the defense, and the information in their personnel files could contain “complaints of a similar nature by other citizens (and) would establish a habit or custom on the part of these officers to provide false information and/or testify falsely,” according to the Pitchess pleading.

The motion argues that complaints had been made previously about the two officers, and that “officers committed acts of unnecessary or excessive force, acts of bias and prejudice, illegal arrests, unlawful search and seizure and other alleged acts involving moral turpitude.”

In short, the city didn’t argue the substance of the motion, that the files included information that the defense believed to exist – namely, that the officers have a history of bad arrests – but that the court shouldn’t grant the request for technical reasons.

The court did grant the request but – as happens in virtually all similar cases – said it found nothing that would benefit Caleb Macon.

“We demand that the Sacramento Police Department stop terrorizing Black families that have members that are on, or have been on  parole or probation (and) stop using infraction and misdemeanor stops to criminalize Black community that are in, and outside, predominately Black neighborhoods,” said Faison.

“Officers found to have engaged in abusive behavior towards Black people in the community they patrol should be immediately removed and barred from any further engagement in that community,” added Faison.

Black Lives Matter Sacramento is also asking that “when abuse and trauma has been inflicted on the members of families, particularly children, compensation should be provided for mental health treatment either directly funded by the Police Department or the City of Sacramento.”

Finally, Black Lives Matter Sacramento also demanded that all charges be dismissed “when the original arrest was never warranted…it’s a violation of Caleb’s civil rights.”

Caleb Macon’s trial is slated to begin in late June on two counts of resisting arrest.