SACRAMENTO – In a just-released “California Police Scoreboard” – said to be the first-ever evaluation police violence and accountability of the state’s 100 largest cities – the results are maybe not totally surprising, but still shocking.

See the full scorecard at: https://policescorecard.org/

Covering only the 2016-17 time period, the scorecard assessed “each police department’s outcomes from police use of force to how they respond to reports of misconduct to the types of issues they prioritize for enforcement (and more),” according to the study. A letter grade was given to each city.

The city of Sacramento – the cities of Davis and Woodland were not included – garnered a score of 44 percent, or an “F,” ranking 66th worst of the 100 largest cities.

But Sacramento isn’t alone. Most cities received a score lower than 60 percent, or an “F.” Beverly Hills Police received the lowest/worst score (20)

All in all, the scoreboard summary is specific and comprehensive, revealing “a disturbing picture of policing within the state,” reflecting “high levels of police violence, severe racial inequities in law enforcement and a system that almost never holds officers accountable for misconduct,” the report concluded.

Produced by “Campaign Zero,” which collected data from research literature, the state Dept of Justice, public records act requests and cities and police departments, the data includes how police departments “interact” with

communities and is designed to “help communities, police leaders and policy-makers to reduce police use of force,” according to Campaign Zero.

The campaign said it chose California for the first state to evaluate because there’s been an “unprecedented” amount of data collected already and “because police violence is particularly severe in California compared to other states.”

Key findings statewide include, per the study:

The report specifically notes, “There’s evidence of police racial bias in California, especially against Black people. Statewide, Black people were arrested for misdemeanor offenses at 2.2x higher rate per population than white people. 89 of California’s 100 largest city police departments arrested Black people for drug possession at higher rates than Whites, despite research showing similar rates of drug use and selling between the group.”

Although it appears it doesn’t matter whether an unarmed suspect is White, Black or Latinx – the Sacramento Police kill about half of them.

Also, of the 525 civilian complaints of police misconduct, only one in every 12 were ruled in favor of civilians. And, in Sacramento, there were 16,536 arrests during the period, about 3.3 times as many arrests for low level offenses as for violent crimes.

Sacramento Police failed to attempt non-lethal force before shooting 83 percent of the time, even though in 25 percent of the cases where police said they believed there was a gun, there was no gun. Blacks were arrested and killed or seriously injured about three times their percentage of the population.

According to the report, “Policies Making It Harder to Hold Police Accountable” in Sacramento included disqualification of complaints, resisting and delaying interrogations, officers are given unfair access to information, oversight and discipline are limited, officers get paid for misconduct and misconduct records are erased. 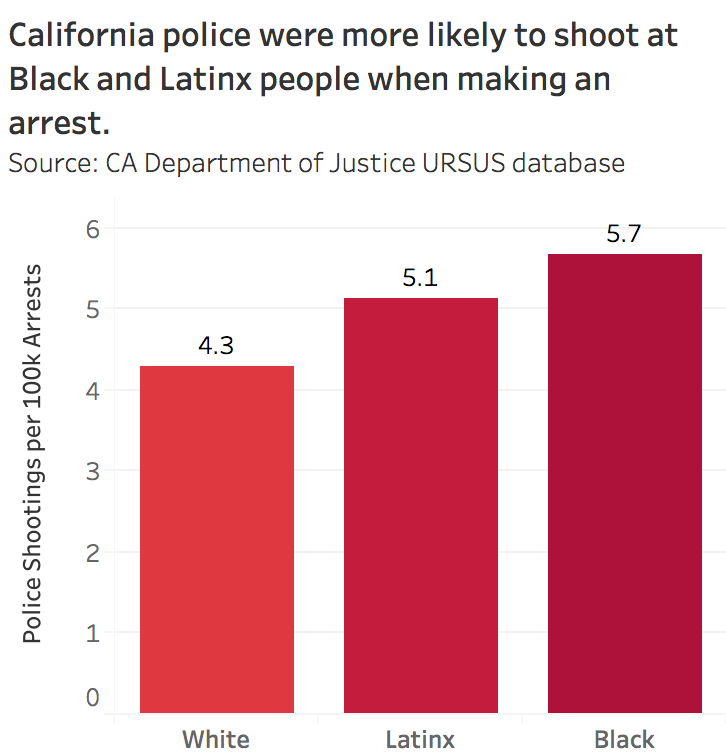