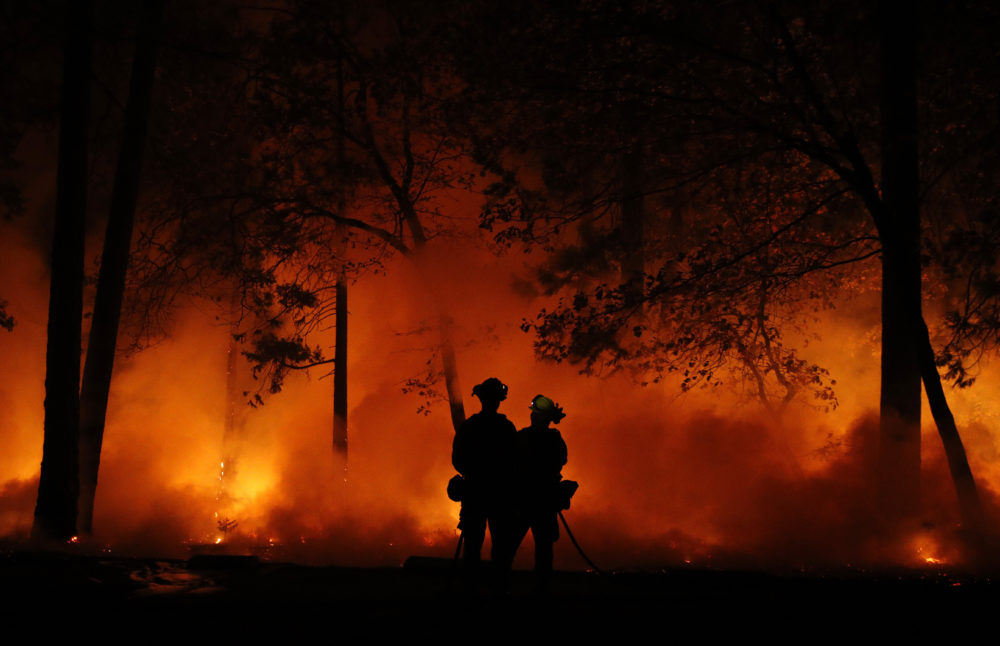 There we were on Friday evening and suddenly the news is reporting that areas of Yolo County – specifically Winters and Davis – could have the power turned off on Saturday morning at 6 am.

As it turned out it was rural areas of Yolo County – around 1600 customers.  But PG&E warned that the power outage would be for a considerable length of time, “expected  to continue from  early Saturday morning through at least Saturday afternoon, and possibly into Sunday.”

As it turns out this will not impact the city of Davis – at least this time – but could that change in the future?  No one seems to know.

The scary thing is this is the first time this year we have faced high winds and high heat and it just rained – just last week.  The ground is still wet in some places.  Already we are seeing fires.

“The safety of our customers and the communities we serve is our most important responsibility,” said Michael Lewis, senior vice president of Electric Operations, PG&E, in a statement.  “We know how much our customers rely on electric service, and our decision tonight to turn off power is to protect our communities experiencing extreme fire danger.”

The Bee reports that the shutoffs came “a day after PG&E’s board of directors and chief executive officer, Bill Johnson, visited Paradise for a court-ordered, first-hand look at the devastation of last November’s Camp Fire.”

The company has apparently said it would use blackouts only as a “last resort,” however, as the Bee reports, “it’s under enormous pressure to prevent any more wildfires, and the planned blackouts are part of a state-approved ‘wildfire prevention’ program that all major utilities had to prepare this year. PG&E ran a deliberate blackout across parts of Northern California last fall, but its plan for this year is much more aggressive.”

Last resort?  It took this as preemptive action before anything happened.

Let us be clear on a few points here.  Given the loss of life and property destruction the last few years, if turning off the power can prevent that, then fine, do what you have to do.  As we noted last

summer and fall, the health impacts of these fires extend well beyond just the immediate tragedy.

Last fall we had smoke days, had the cancellation of schools and UC Davis, and thus the impact was tremendous.

But power outages every time we get a north wind and a heat wave cannot become the new normal in the age of global warming.  There has to be a bigger plan.  The state needs to mandate that PG&E fix its transmission lines and take actions to make electrical transmission safe, so that we don’t have to have the power go out for potentially days at a time every time we get a high pressure system during the summer months.

The problem is that even with these precautions, fires are a risk.  For instance, yesterday just north of Rumsey in Yolo County a fire was report in the afternoon, quickly growing from 125 acres to 600 acres and by 9 pm, 1700 with no containment.

The cause of the fire is not known.  But with or without the power outages, this is our reality.

In the meantime, it is business as usually in Washington.  The NY Times reported yesterday, “The White House tried to stop a State Department senior intelligence analyst from discussing climate science in congressional testimony this week, internal emails and documents show.”

Analyst Rod Schoonover, “an adjunct professor at Georgetown University, was ultimately allowed to speak before the House Permanent Select Committee on Intelligence on Wednesday.  But in a highly unusual move, the White House refused to approve Dr. Schoonover’s written testimony for entry into the permanent Congressional Record.”

The Times reported on an email that said “the science did not match the Trump administration’s views.”

As they waffle, a new report from Australia, the Breakthrough National Centre for Climate Restoration, finds that human civilization is at risk of collapse by 2050 due to the effects of climate change.

The Inquiry found that climate change is “a current and existential national security risk,” one that “threatens the premature extinction of Earth-originating intelligent life or the permanent and drastic destruction of its potential for desirable future development.”

At the same time, Professor Will Steffen said that the climate challenge is “not a technological or scientific problem.  It’s a question of humanity’s socio-political values.  We need a social tipping point that flips our thinking before we reach a tipping point in the climate system.”

In short, as Admiral Chris Barrie, a AC RAN retired professor put, “A doomsday future is not inevitable.  But without immediate action our prospects are poor.”

However, the findings are bleak: climate change is “a near- to mid-term existential threat to human civilization” and “could possibly end the world as we know it in the coming decades.”

The report also cautions that “planetary and human systems [are] reaching a ‘point of no return’ by mid-century, in which the prospect of a largely uninhabitable Earth leads to the breakdown of nations and the international order.”

In the meantime, we can be thankful that this time we avoided a prolonged power outrage – will we be as fortunate next time?  After all, summer has not even officially begun.