The upside for the city in the survey that we have been evaluating following its Tuesday release is that the city gets mostly high marks on the provision of city services, and the sales tax measure is widely supported and likely to be renewed.

But even a cursory evaluation of public opinion shows a public that is widely unaware of the extent of the city’s fiscal problems.  And, while that does not appear to hurt it with regards to the sales tax, it probably did harm it irreparably in the failure of the 2018 roads tax – and perhaps the prospect of future tax or revenue measures as well. 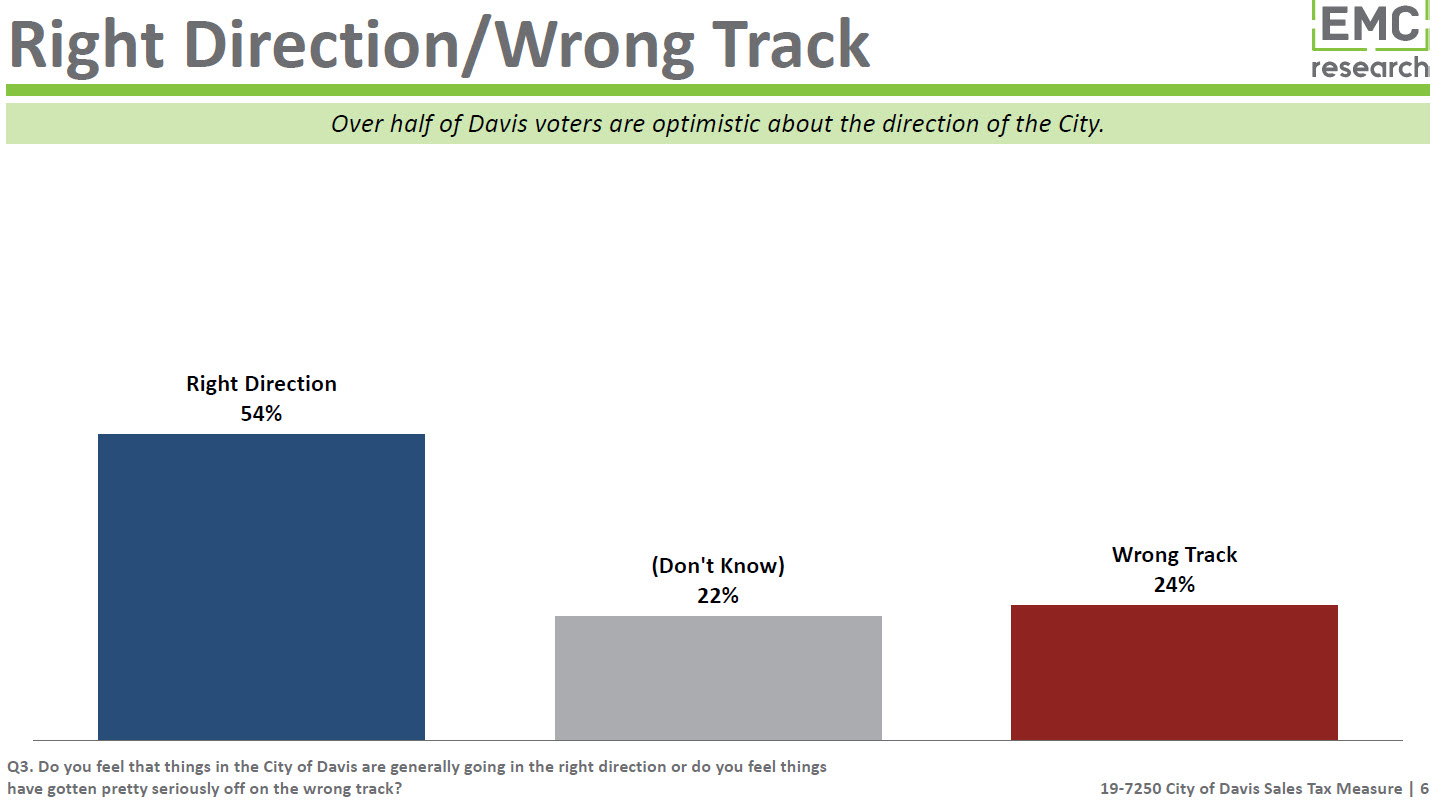 The voters believe Davis is on the right track by a 54-24 margin.  While the 22 percent “Don’t Know” would seem rather high for such a highly subjective, vague and non-specific question as this, I think more informed voters would take issue with the idea that the city is headed in the right direction.

The city has a number of large and potentially growing challenges – generating basic revenues, a $200 million shortfall for infrastructure, lagging sales tax, and lack of affordability of housing (ironically an issue the voters did correctly identify).  As we have discussed, these are not insurmountable issues, but they are challenges which do not appear to be recognized, as we will see as we dig deeper.

About 6 percent identify the budget or the economy as the most important problem, and 5 percent identify road quality and repair.  Captured somewhere in the budget and economy category is the fiscal condition and lack of economic development that many believe are critical issues.  But the survey does not appear to indicate that those issues are on the radar for the voters – which some have said is due to this survey question only allowing the respondent to select one issue. 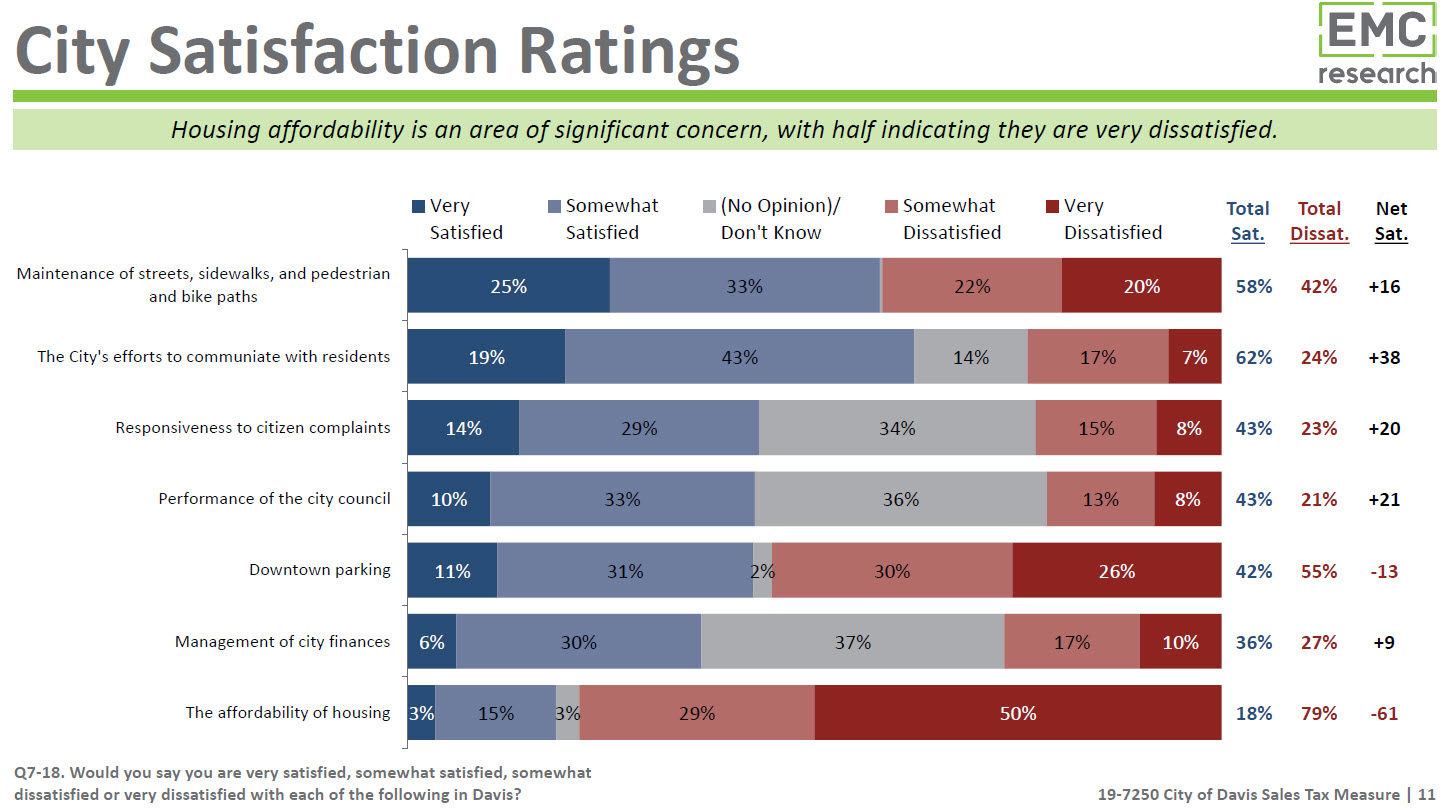 It is on the city satisfaction ratings we start to see a problem.

When it comes to “Maintenance of streets, sidewalks, and pedestrian and bike paths,” while 42 percent are dissatisfied – 20 percent of which are very dissatisfied – the issue somehow gets a net positive rating.  The city has a deep deficit here running between $6 million and $16 million per year and hundreds of millions over the next 20 years.

One only needs to drive down many streets to hit deep cracks, potholes and bumps.  How people are satisfied with the roadways – a very visible issue – is really baffling.

This is an issue with which we have seen some deterioration of the city’s ratings.  In 2014, 77 percent of people were satisfied with the maintenance of streets, et al., but it is still baffling given the report that had just come out about the city being over $100 million in a hole.

Ratings for the management of city finances also reveal the depths of the lack of voter knowledge.  The city gets a net positive rating here as well – barely.  Thirty-six percent say they are satisfied (only 6 percent are very satisfied) while 27 percent are unsatisfied.

The big number though is the 37 percent, more than a third, and a plurality of respondents admit they don’t know.

The management of city finances is probably not the best measure.  After all, you can argue that the current council has done a good job managing a tricky situation.  Or you can argue that they have not done nearly enough on the issue of cost containment, revenue generation or economic development.

How one can come to the conclusion that having a $200 million shortfall in funding for basic infrastructure needs is only some need, rather than a great need, suggests to me that only 11 percent really understand the true nature of the city’s fiscal predicament while the rest – 89 percent – really do not know the extent of the problem.

We are asking the voters to support taxes and possibly economic development projects, and yet they really do not understand the nature of the city’s fiscal problem.

These numbers come with a real warning sign as well – as we have noted with the schools, where the numbers are almost completely identical – with the answer to the statement “Taxes in Davis are already high enough, I’ll vote against any new tax measure.”

The good news for the city is, by a 55-37 margin, voters reject that statement.  But there is a problem here, that 37 percent voting against any new tax precludes making the threshold needed to pass a two-thirds parcel tax.  Now for the city, they can pass sales tax during the general city election at 50 percent.  But any specific tax or tax off the general election cycle needs a two-thirds vote.

This is not quite the crisis it is for the schools, which rely on a two-thirds parcel tax for local funding, but it is something our city must be aware of.

Bottom line – as I have stated a number of times in the past, the voters in Davis simply do not understand the fiscal condition of the city and how perilous things are.  That may not cause the city problems in an election with a sales tax renewal polling in the 70 percent range, but when it came to passing a roads tax in 2018, and possibly an economic development project, that might become a problem.