The city kept the survey hidden from the public until it was presented on Tuesday night.  Once unveiled, the results were stark and somewhat overwhelming.

There were three key trends, in addition to overwhelming support for a renewal of the sales tax.

Key findings from the survey include:

The survey was conducted by EMC Research from May 23-31, 2019, with 500 completed interviews via landline and cell phone interviews and a web version of the survey. The overall margin of error is plus or minus 4.38 percentage points.

Overall the respondents felt that the city was moving in the right direction (54 percent) compared to 24 percent believing it was on the wrong track and 22 percent not knowing.  The consultant told the council, “Overall, based on my experience, these are great numbers.”

The voters gave high marks for: quality of the parks, overall quality of life, overall image and reputation of the city, safety of the city, openness and acceptance of the community towards people of diverse backgrounds, and the job that the city is doing to provide city services.

The numbers, however, shrank a bit in the next tier with maintenance of the streets getting a net positive but it was a 58-42 split (with almost no one stating that they didn’t know).  Efforts to communicate with residents was an overall positive with a 62-24 split, and responsiveness to citizen complaints fell below 50 percent but was 43-23 positive.

The performance of the council likewise was a net positive, but at a 43-21 percent split there were 36 percent that did not know.  The margin shrank further on management of finances, with 36-27 positive but a whopping 37 percent who do not know.

Downtown parking dips into the net negative, with 55 percent registering dissatisfaction compared to 42 positive (once again a tiny percentage did not have an opinion).

Where the city gets hit the hardest is on the affordability of housing, with only 18 percent satisfied (only 3 percent of that very satisfied) – and a whopping 79 percent unsatisfied. 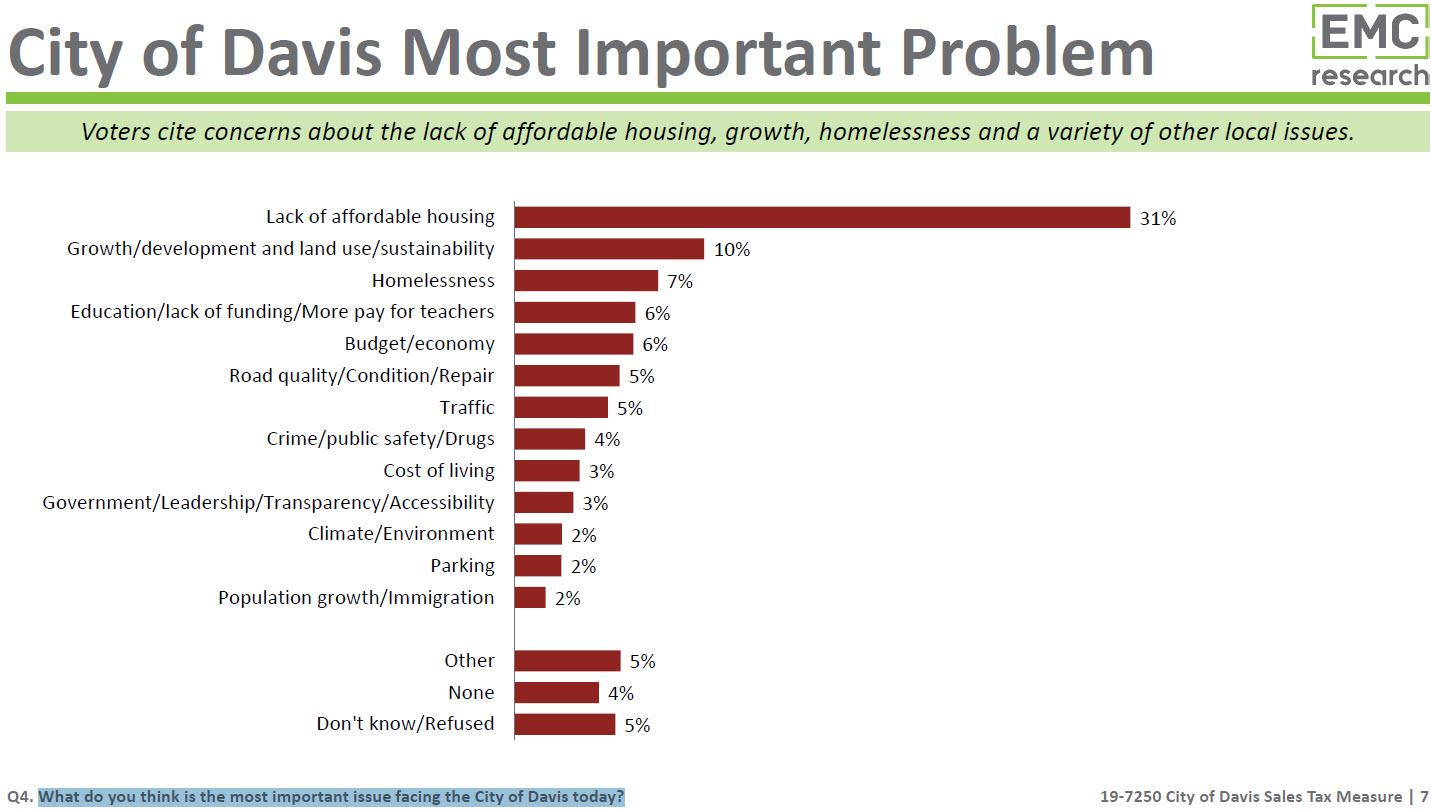 That leads us to the biggest issue facing the community.  A whopping 31 percent responded “lack of affordable housing” when asked the open-ended question, “What do you think is the most important issue facing the City of Davis today?”

Raising perhaps the salience of that issue is the fact that growth/development is second at 10 percent, with homelessness third at 7 percent. 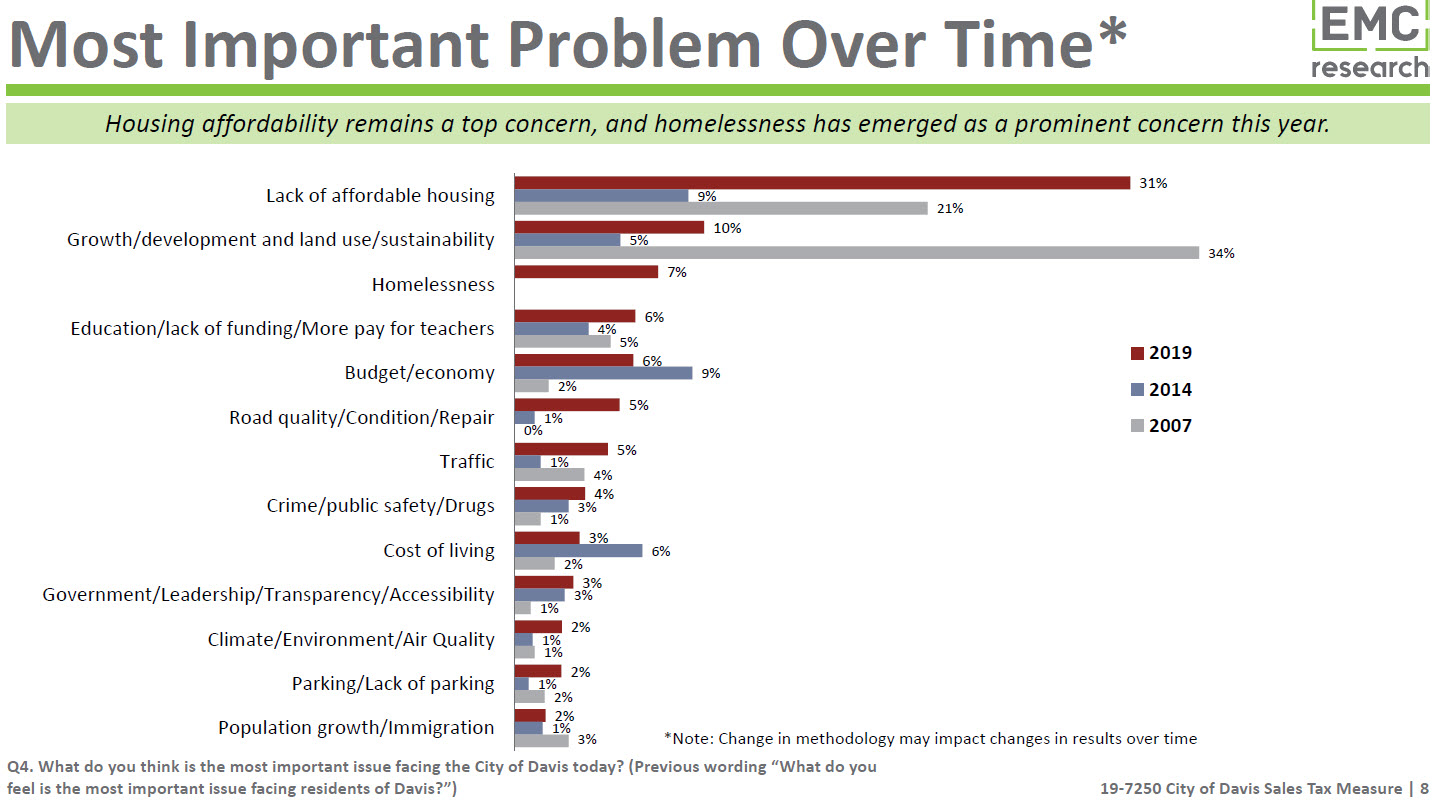 Breaking it down over time, we can see that homelessness was not even on the radar of folks in 2007 or 2014.  Growth and development moved from the most important issue in 2007, to just 5 percent in 2014, and now back up to 10 percent. 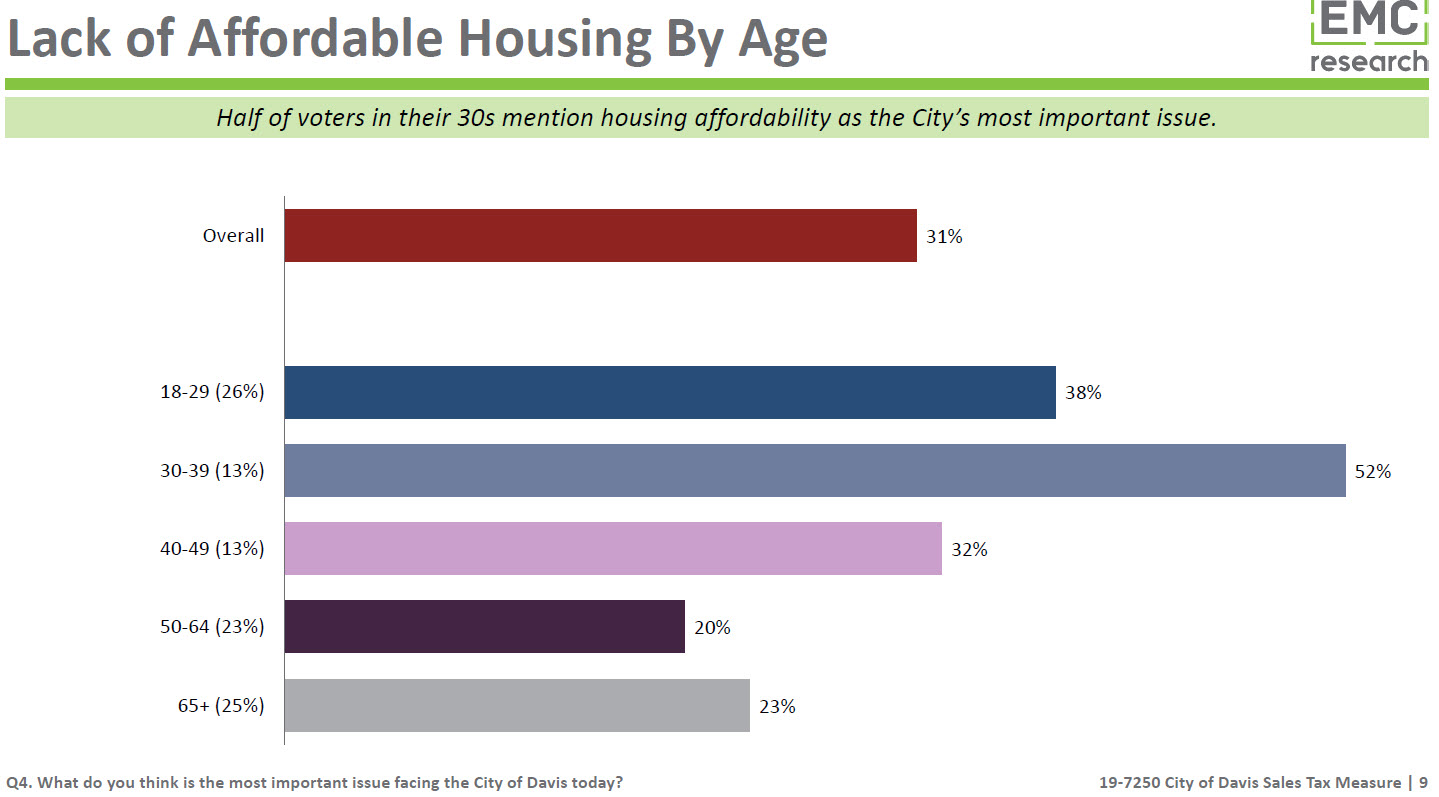 We can see a strong generational component, where the group aged 18 to 39 sees it as an overwhelming problem, decreasing to 32 percent by 40 to 49 and then dropping below a quarter for those over the age of 50.

Finally, there is a real question about voter knowledge in key areas.

The voters are very willing to offer an opinion on things that are visible, but when it gets into a more abstract analysis their knowledge level goes way down.

The issues that are most striking are performance of council, where 36 percent have no opinion and management of city finances registers a 37 percent “don’t know” response.

On the other hand, issues like streets, parking and housing have almost no people not registering an opinion.

The voters still give the city a net positive on streets – despite the poor conditions and despite the budget shortfalls – but in just five years, support has dropped from 77 percent to 58 percent, and the negatives have gone from 23 percent to 42 percent. 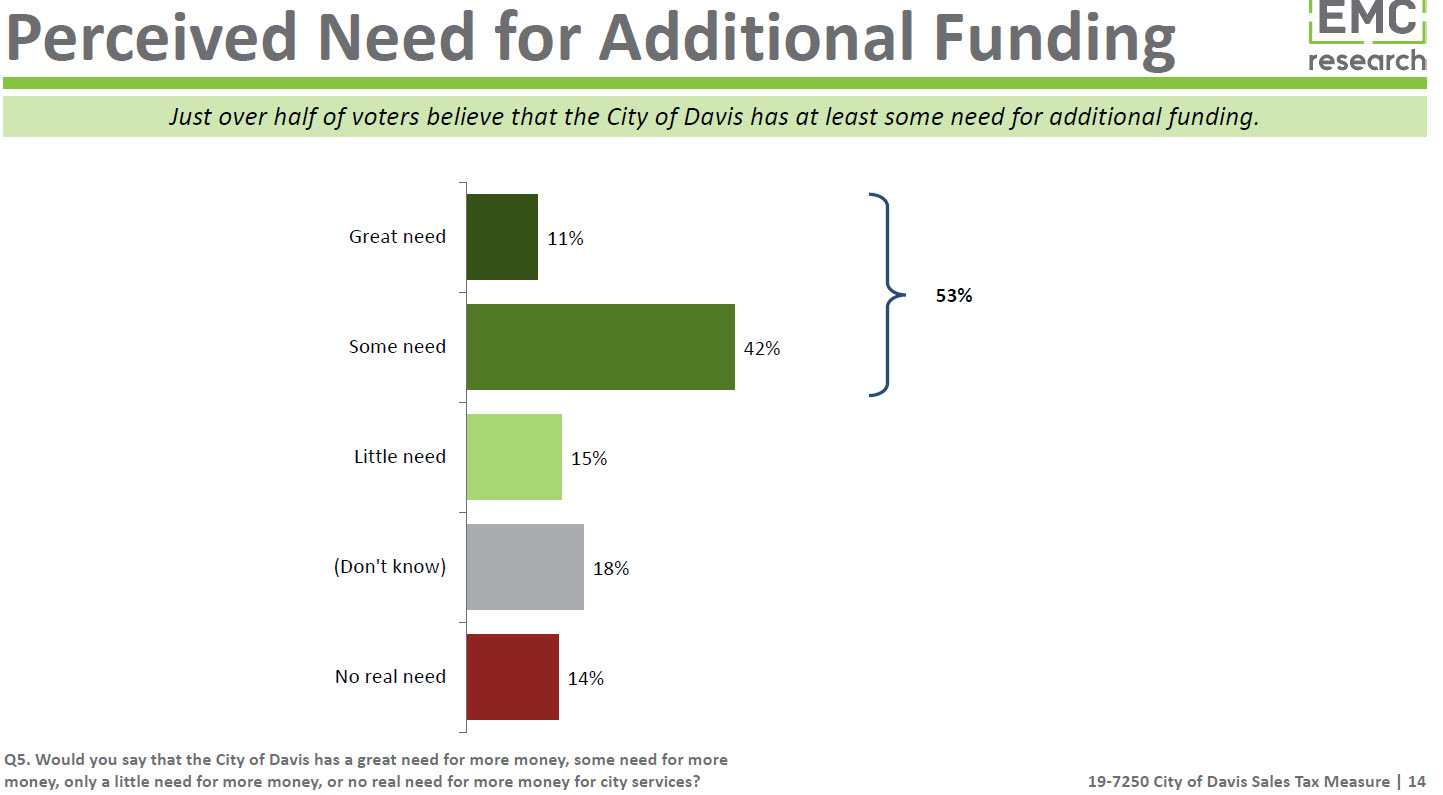 The perceived need for additional funding is 53 percent see at least some need – but only 11 percent see a great need, despite the large shortfalls for infrastructure.  Overall it’s a 53-29 split, with 29 percent indicating little to no need and a somewhat sizable 18 percent who do not know.