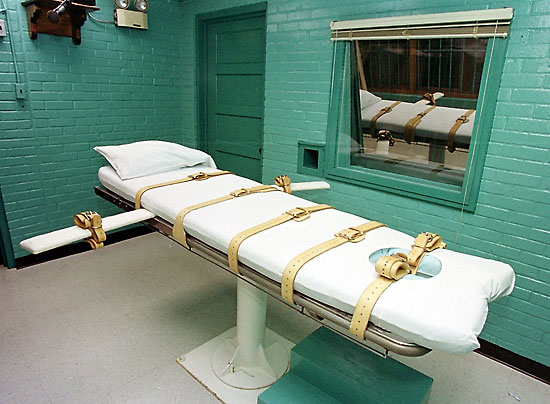 With more and more states moving to end the death penalty, the Trump administration is naturally moving in the other direction.  Attorney General William Barr has directed the Federal Bureau of Prisons (BOP) to adopt a proposed Addendum to the Federal Execution Protocol—clearing the way for the federal government to resume capital punishment after a nearly two-decade lapse, and bringing justice to victims of the most horrific crimes.

“Congress has expressly authorized the death penalty through legislation adopted by the people’s representatives in both houses of Congress and signed by the President,” Attorney General Barr said.

He added, “Under Administrations of both parties, the Department of Justice has sought the death penalty against the worst criminals, including these five murderers, each of whom was convicted by a jury of his peers after a full and fair proceeding.  The Justice Department upholds the rule of law—and we owe it to the victims and their families to carry forward the sentence imposed by our justice system.”

Ruth Friedman, Director of the Federal Capital Habeas Project, called the notion that “the federal death penalty is ‘the gold standard’ of capital punishment systems” a “pervasive myth.”

She said that they claim it is being applied “only to the worst offenders for a narrow class of especially heinous crimes involving unique federal interests, with highly skilled and well-resourced lawyers on both sides.”

She added, however, that the federal death penalty “is arbitrary, racially-biased, and rife with poor lawyering and junk science. Problems unique to the federal death penalty include over-federalization of traditionally state crimes and restricted judicial review. These and other concerns, including troubling questions about the new execution protocol, are why there must be additional court review before

the federal government can proceed with any execution.”

They said, “Each of these inmates has exhausted their appellate and post-conviction remedies, and currently no legal impediments prevent their executions, which will take place at U.S. Penitentiary Terre Haute, Indiana.  Additional executions will be scheduled at a later date.”

The Death Penalty Information Center in a release points out: “The five cases involve prisoners from the death-penalty states of Arkansas, Arizona, Missouri, and Texas, as well as one from Iowa, whose state law does not authorize capital punishment.

“The federal death penalty is authorized for a variety of crimes that directly implicate federal interests, including terrorism and espionage,” the statement notes. “However, none of the prisoners who are the subjects of the five warrants were charged with such crimes, and only one of the 62 people on federal death row has been convicted of terrorism. No one on death row has been sentenced to death for a crime involving treason or espionage.”

Death Penalty Information Center Executive Director Robert Dunham said “merely saying that there is a legal protocol is not the same thing as having a legal protocol. Federal law is not made by executive fiat. You have to follow the rules.” Paul Enzinna, who represents James Roane and two other federal death-row prisoners in the lethal injection lawsuit told The National Law Journal the protocol “obviously will be subject to examination in our lethal injection litigation.”

He added, “The intentional killing of another person is wrong, and our death penalty system has been, by all measures, a failure. It has discriminated against defendants who are mentally ill, black and brown, or can’t afford expensive legal representation. It has provided no public safety benefit or value as a deterrent. It has wasted billions of taxpayer dollars. Most of all, the death penalty is absolute. It’s irreversible and irreparable in the event of human error.”

On March 13, Governor Newsom signed an executive order placing a moratorium on the death penalty in California and closed the execution chamber in San Quentin State Prison.

According to the Death Penalty Information Center, “The federal death penalty was instituted in 1988. Three people have been executed under federal authority, with the last federal execution taking place in 2003.”

The last federal death warrant was issued for Bruce Webster on April 16, 2007.

However, Mr. Webster’s execution was stayed and his death sentence was subsequently vacated on June 28, 2019, when a federal district court judge found that Webster is intellectually disabled, making him ineligible for the death penalty.

DPIC said, “Critics of the federal death penalty argue that it is plagued by many of the same problems as state death-penalty systems, including racial bias (55% of defendants sentenced to death in the last decade were people of color), geographical arbitrariness (just three states – Virginia, Texas, and Missouri – are responsible for nearly half of all federal death-row prisoners), and disparities in the quality and funding of defense counsel.”