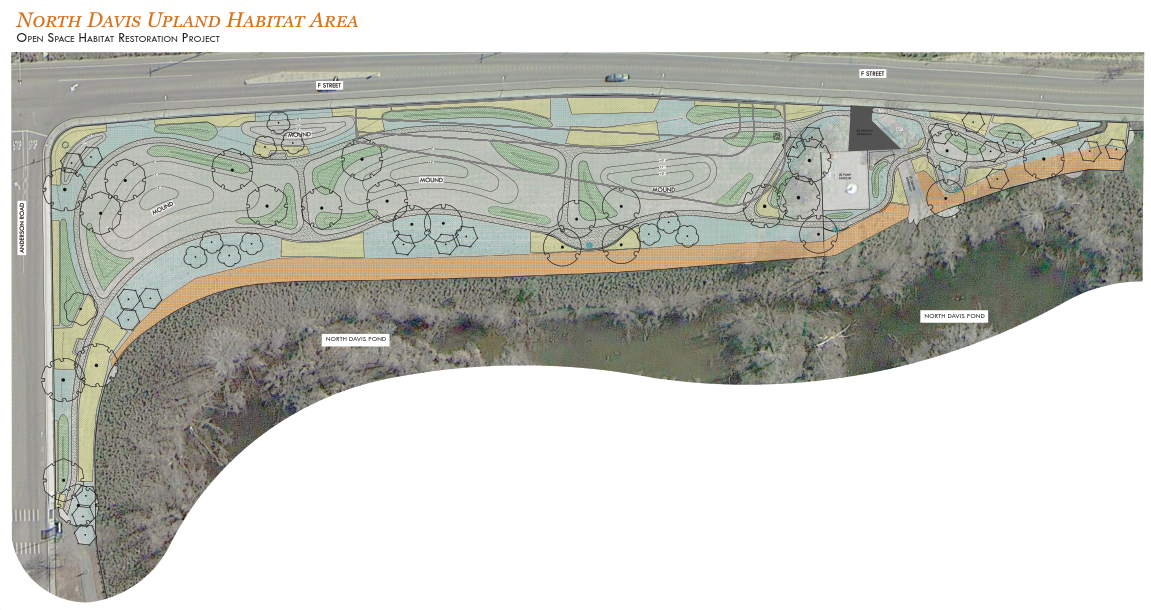 (From Press Release) – The City of Davis announced today that three acres of City-owned, vacant land at the corner of F Street and Anderson Road will soon be transformed into a new wildlife habitat area with walking paths for the public to enjoy. A groundbreaking for the site will take place on Saturday, July 27, at 9:30 a.m. Details will follow on Facebook and Nextdoor.

“The community has long wanted something done with this site and I am excited about turning it into an open space that the community can enjoy and wildlife can use as actual habitat,” said City Councilmember Will Arnold, who is the liaison to the Open Space and Habitat Commission. “I am happy to see the City’s open space preservation parcel tax used in this way.”

Over the summer, the City will be realigning the fence to expand the open space area, grading the site to give the new open space some contouring, and controlling the weeds without the use of herbicides. The entire site will be solarized over the summer under reusable greenhouse plastic, which will kill the thick bed of invasive seeds.

Over the winter, the entire site will be blanketed with native grasses and wildflowers (also known as “forbs”). At this time, the City will also be installing a half-mile of new trails that will be fully

ADA accessible. The City also will be planting a 900-foot hedgerow and about a quarter-acre of drainage swales, all with locally sourced native plants. Rocks of varying heights also will be placed so that visitors can sit down and take a rest along the trail.

The site will be open to the public during the spring of 2020, but the habitat restoration won’t be totally complete at that time. During the winter of 2020, the City will plant about 50 new native trees and about 750 native shrubs to round out the restoration.

The three-year, $250,000 project is a collaboration between the City, the Open Space and Habitat Commission and the Friends of North Davis Ponds. It also stems from community feedback the City received during a public outreach effort in 2016. The community expressed an interest in seeing more habitat restoration projects done within the city limits using money from the City’s open space protection parcel tax, which generates about $700,000 a year for the acquisition and maintenance of the City’s open space areas (which do not include parks and greenbelts). The parcel tax is funding two-thirds of the project cost.

“Friends of North Davis Ponds are excited and grateful to the Councilmembers and Open Space and Habitat Commissioners who voted to create the North Davis Upland Habitat Area,” said Jean Jackman, one of the founders of the Friends of North Davis Ponds. “For more than 25 years, various citizens groups have been advocating for open space and lobbied against projects that we deemed inappropriate at this site. This new open space is a logical extension and boundary for the Julie Partansky Wildlife Area, and it will preserve important habitat used by over 200 bird species and 34 species of mammals, amphibians and reptiles.”

The site will be closed to the public beginning in the summer of 2019 through the winter of 2020. The City expects to open the City’s newest open space area to the public in the spring of 2020. The habitat restoration will be complete in the summer of 2022. More information can be found on the City’s website at: https://cityofdavis.org/constructionprojects