Across the nation, people of all faiths, races and ethnicities came out in protest to the inhumane conditions faced by refugees at detention camps across the nation.  Two hundred fifty people came out on Friday night in Davis at Central Park to show their support.

A variety of speakers came to speak at the event sponsored by the Davis Phoenix Coalition, Yolo Interfaith Immigration Network, the Celebration of Abraham, Safe Yolo and the Yolo County Democratic Party. 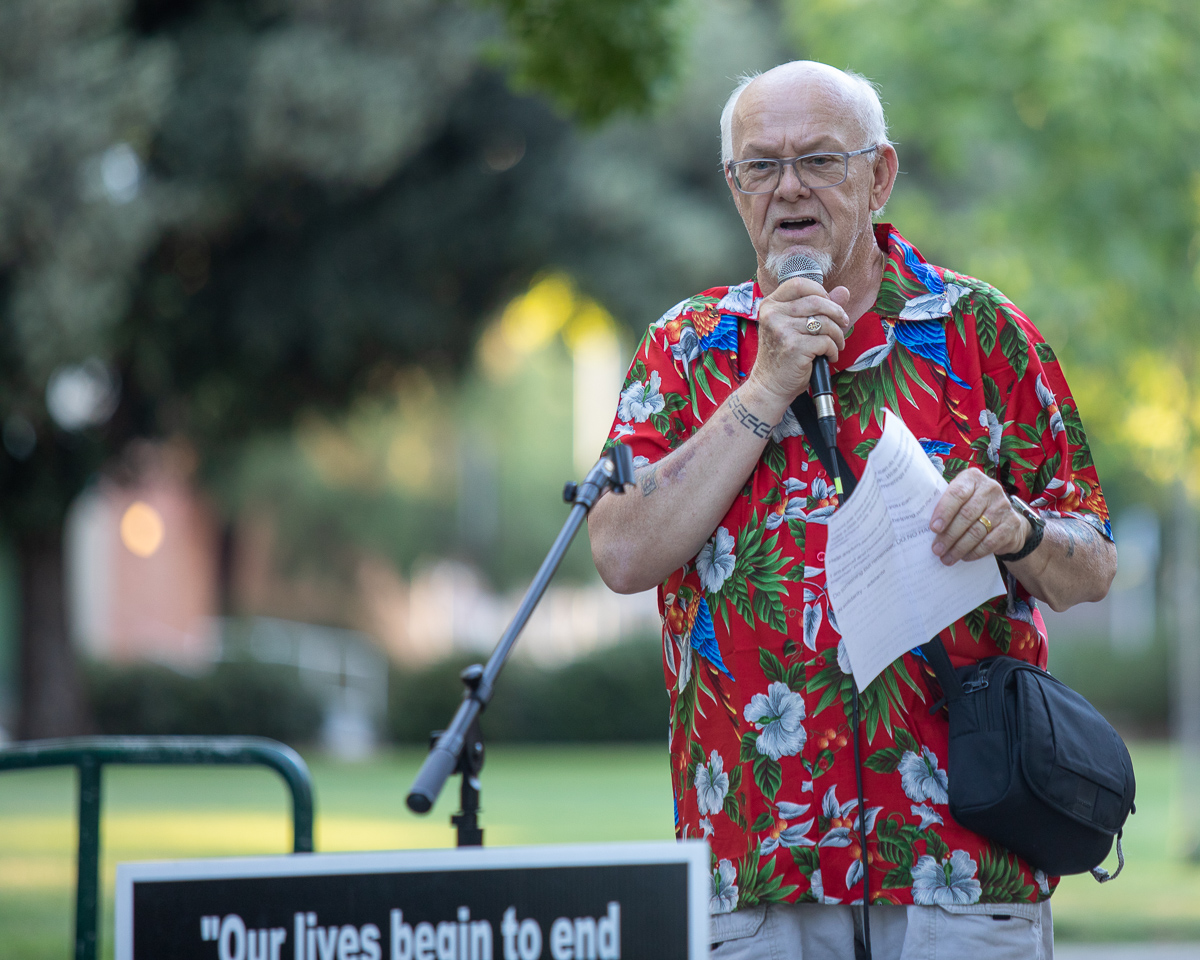 David Lichtenhan from Yolo Interfaith Immigration Network noted that former Sheriff Joe Arapaio from Arizona had referred to his tent camps as “concentration camps” and said, “I’m proud of it.”

“What we’re up against in the United States of America is the most appalling thing I have ever been through,” he said.  “I love the United States, we have done great stuff in many centuries we have been here as far as I’m concern.”

He said, “It’s made my heart ache, my soul cry to see my brothers and sisters who are trying to better their life and come away from a very bad situation, locked up.”

He added, “To separate children, continuing today, is deplorable.  They need to be with their mother and father.” 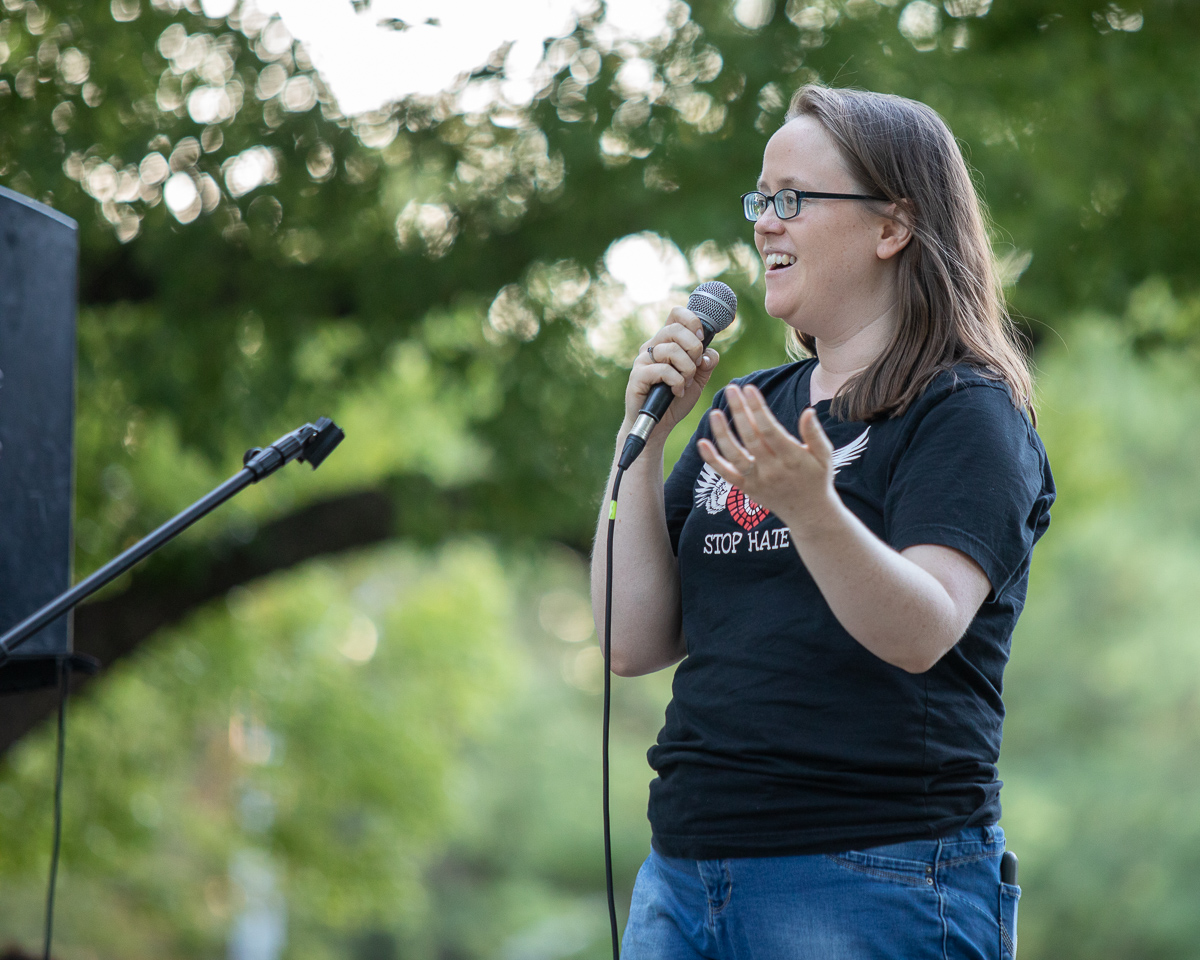 Emily Henderson said that she lies awake every night, thinking, “What can I do?”  She said, “There’s this tension between wanting to shut down and hide and wanting to storm the barricades.”

She said, “This tension between my privilege and my power and my safety and the injustice and the lack of safety that my members of my human family are experiencing is getting more and more painful to live with every day.”

Josh Kaizuka, a local attorney and member of Japanese American Citizen League (JACL) said, “There’s a mantra that we have, one is never again.  But that’s changed.  It’s never again is happening. Because it’s happening right now.”

He said, he didn’t want to be at the Federal Building when the photos of kids in cages first came out. 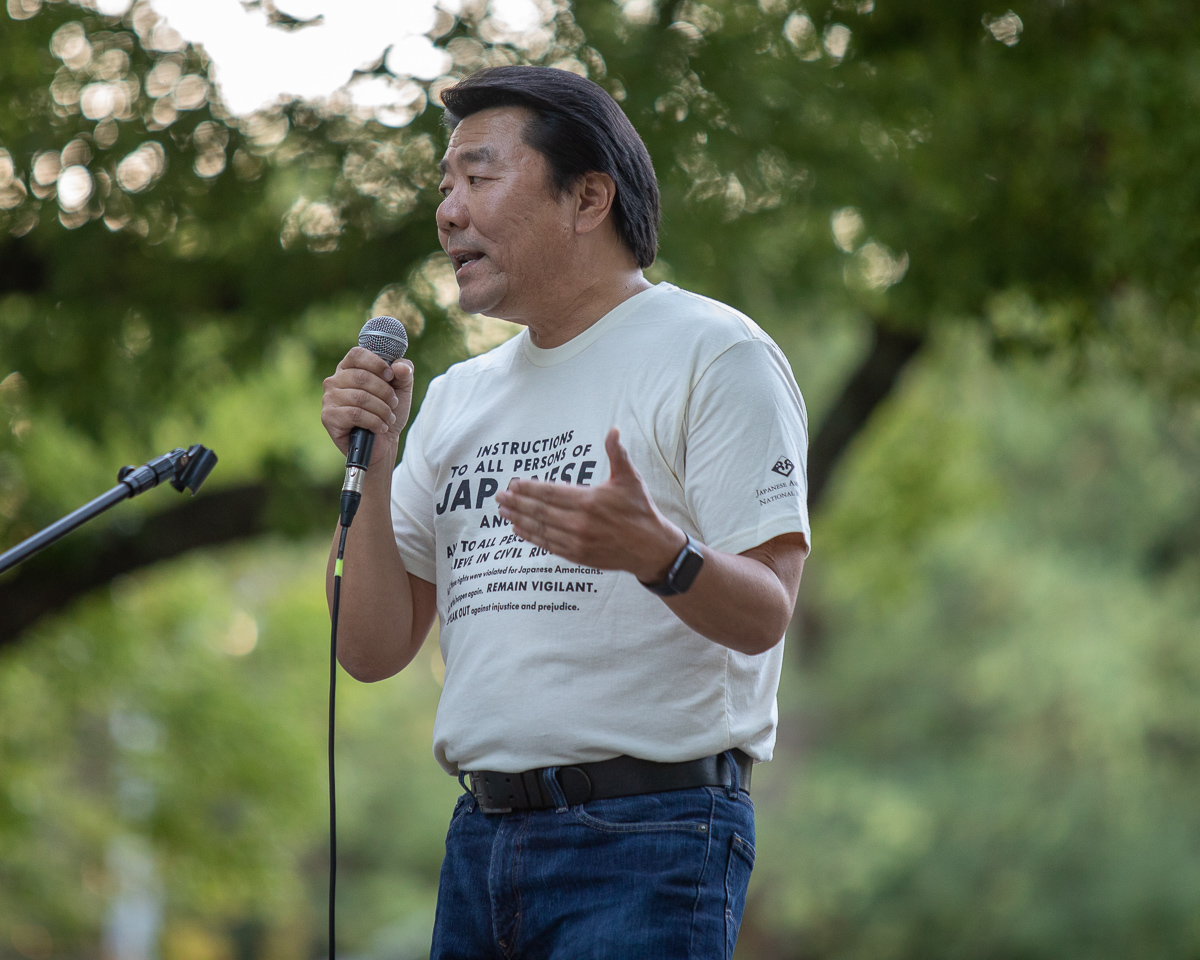 He noted last week, “I didn’t want to be at the Robert T. Matsui Federal Building.  It’s ironic because Bob Matsui was imprisoned in a concentration camp, at six months old, with his family.  His wife Doris was born a prisoner.”

He reminded the crowd, “77 years ago, Executive Order 9066 was signed by then President Roosevelt.  As we now know, it was unconstitutional.  It was based on racism.  It was based on fear-mongering and what else, lack of political leadership.

“Our community sees those parallels today,” he said.  “Because 77 years ago there weren’t those voices for us.

“We’re still living that,” he said.  “For the people out there who lived and survived the concentration camps.  It still hurts.”

Mr. Kaizuka pointed out that these are “essentially legal immigrants.  These are refugees.  They are seeking asylum.  They should not be called illegal!”  He added, “Stop falling for the mantra of this damn administration who continue to say they’re illegal.  They have every right to seek asylum.  So stop saying illegal.” 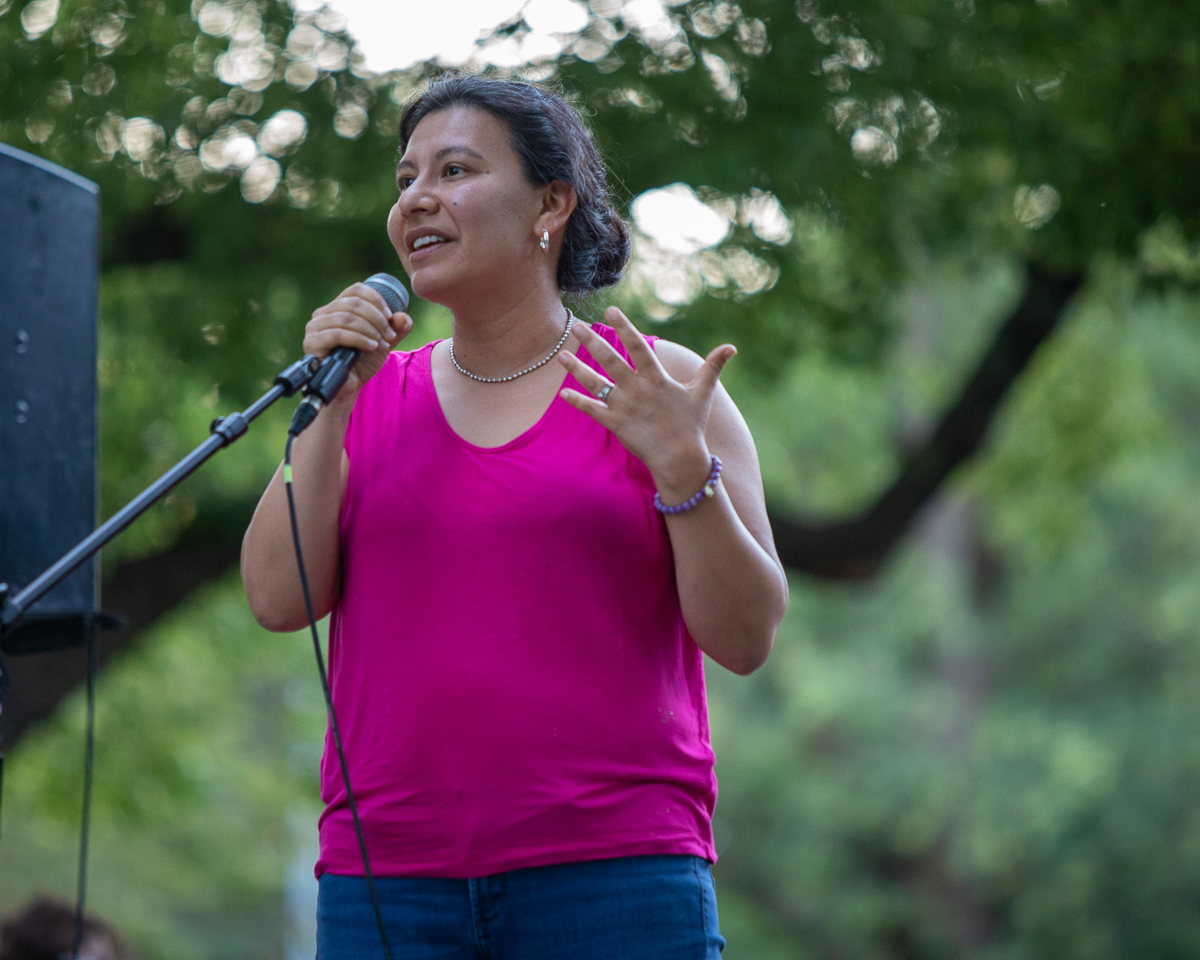 Illiana Kimowicz, mother and attorney, said she has worked hard to bear witness to what is happening where immigrants are not afforded their rights of due process.

She said, “Unfortunately bad things continue to happen and it’s happening on our watch.

“I believe in justice and fairness,” she said.  “But I also believe we need to advocate for ourselves and our communities.  We need to make sure this government upholds what we believe is true to us. 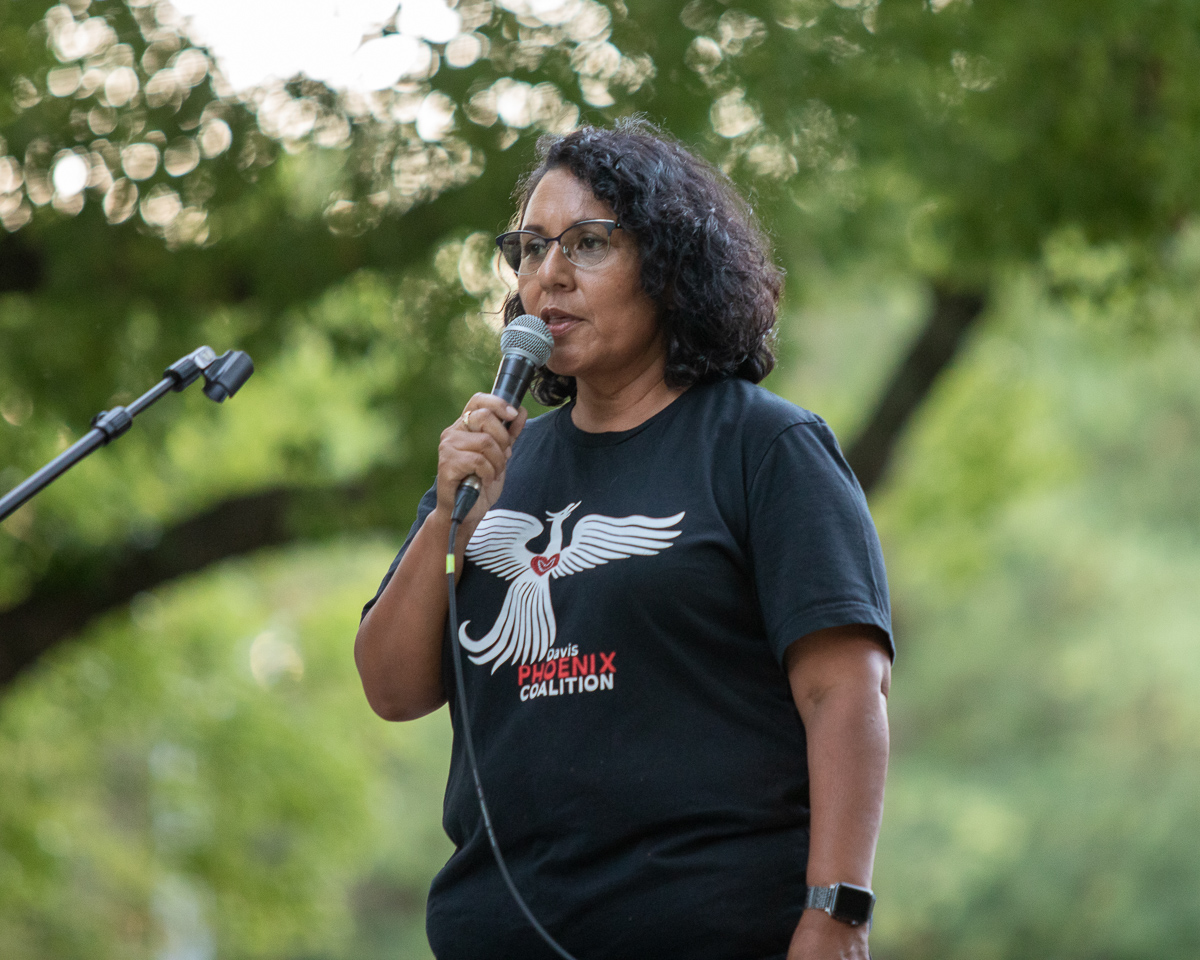 Davis Mayor Pro Tem Gloria Partida said, “When this election happened we were shocked that this was happening and every day it seems there is a new horror that we wake up to.  It feels like there is nothing we can do to stop this.  But there is something we can do – we can vote.

“It’s our responsibility, we can’t walk away from it, because now it’s banging on our door,” she said. 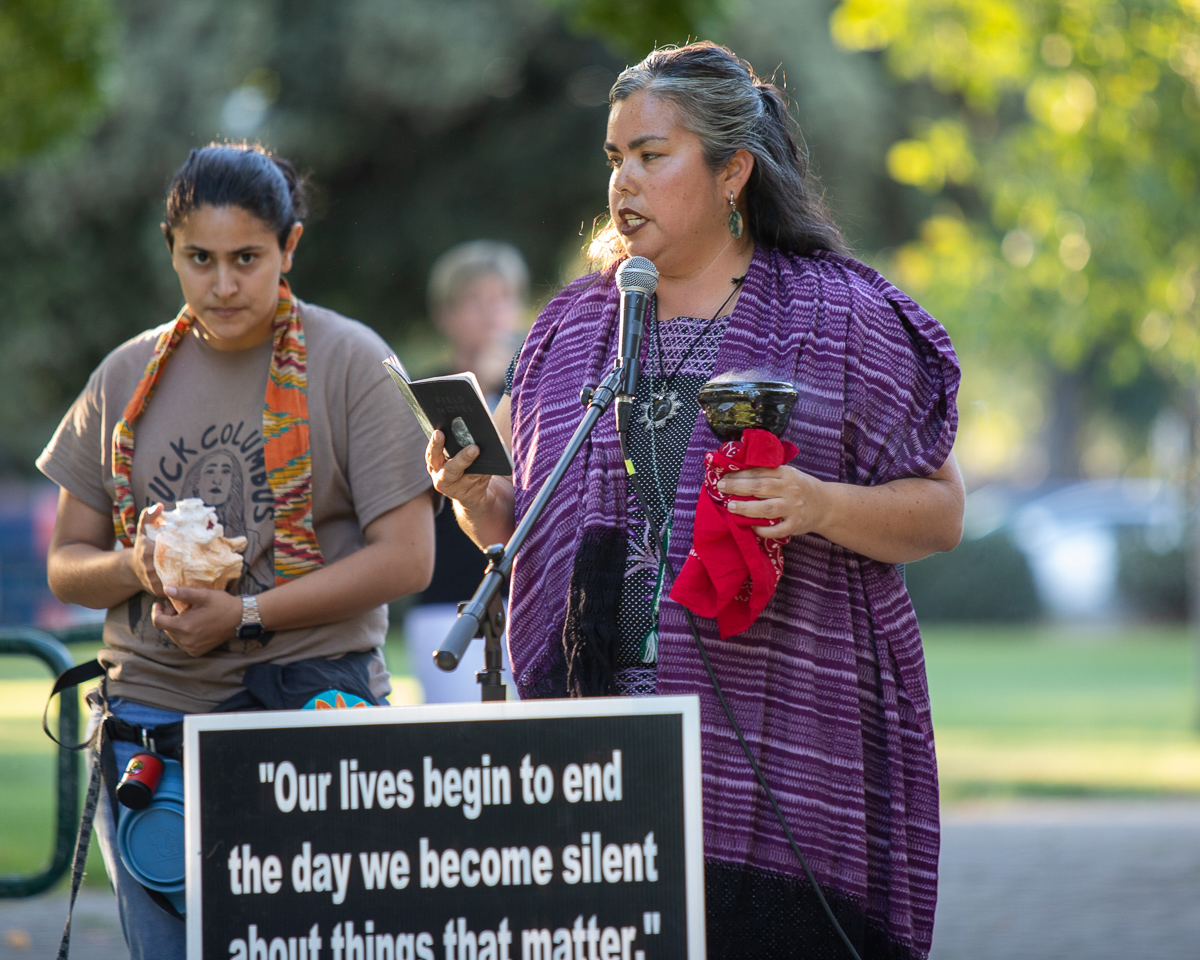 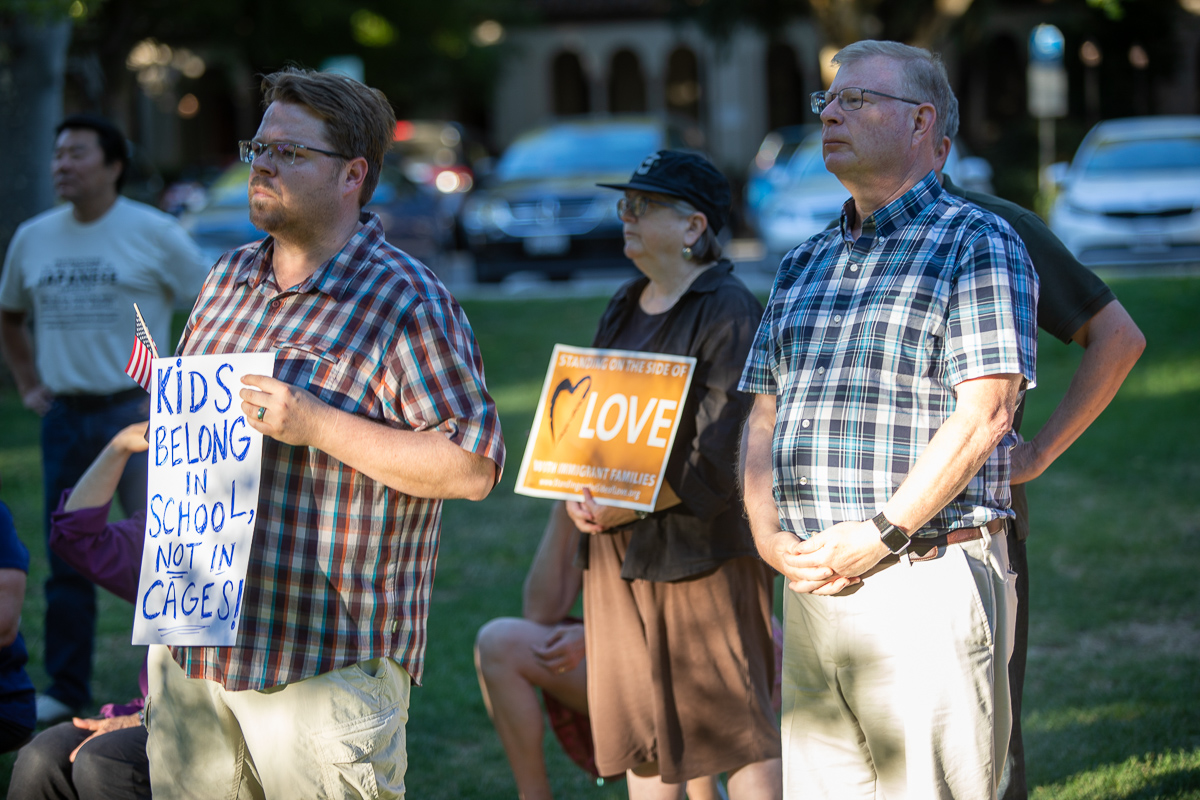 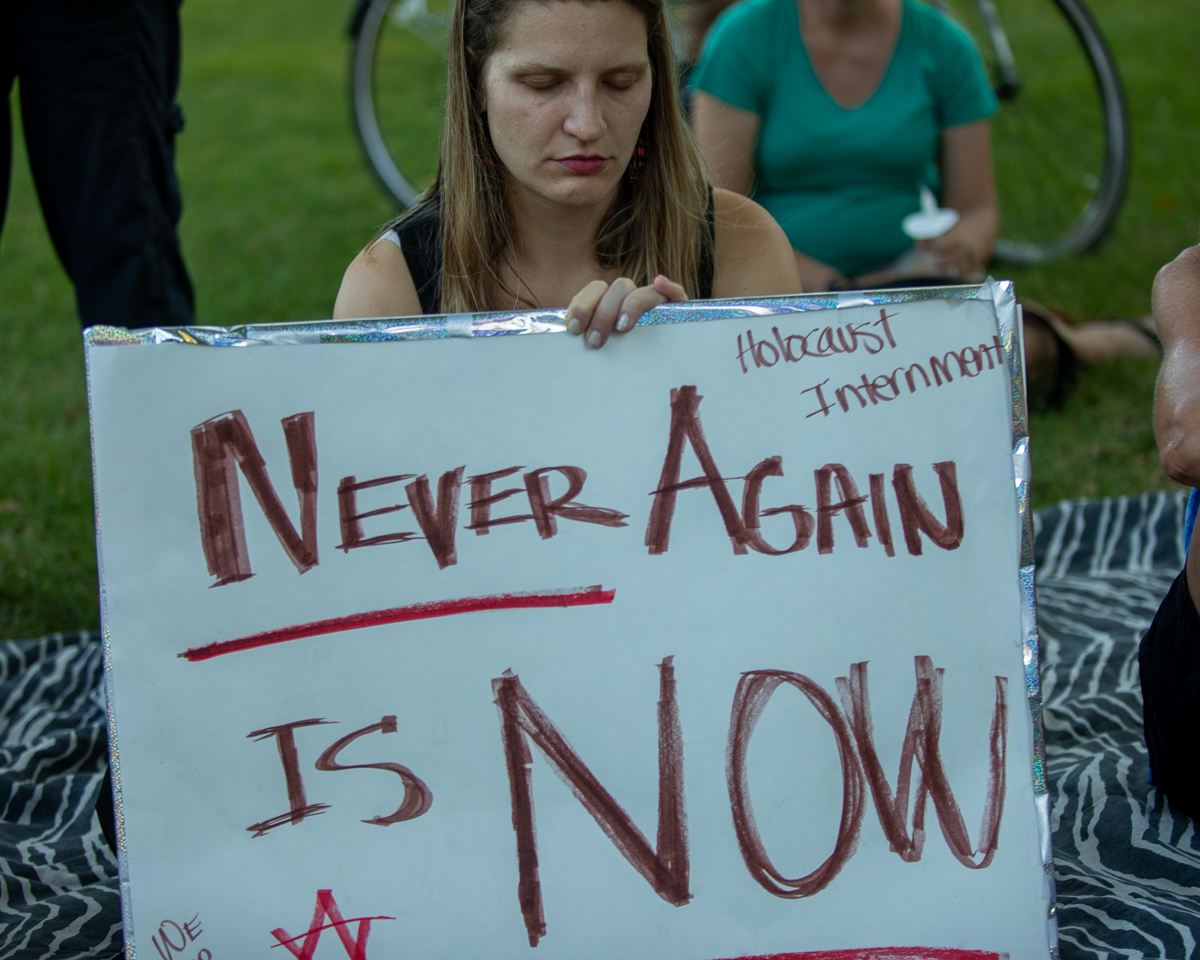 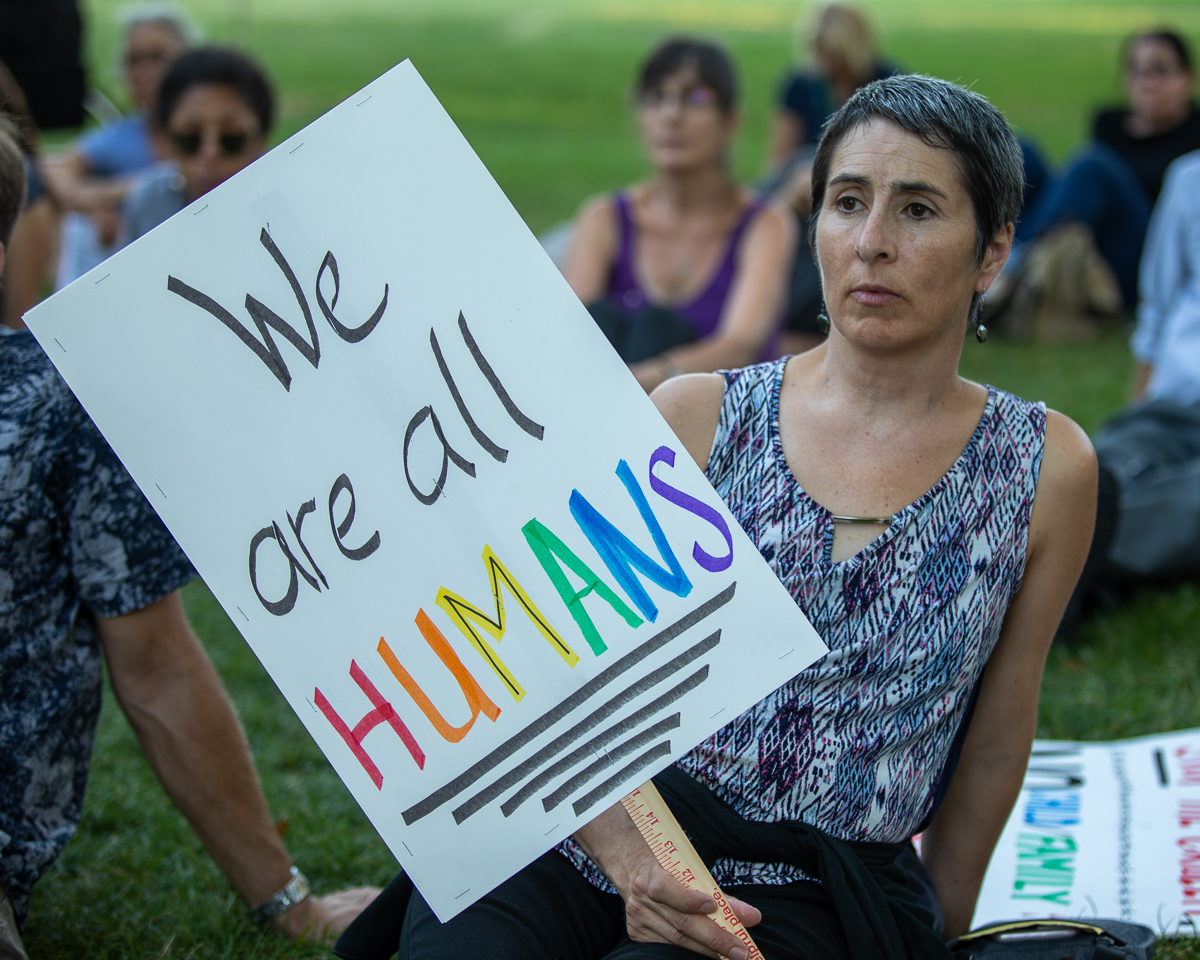 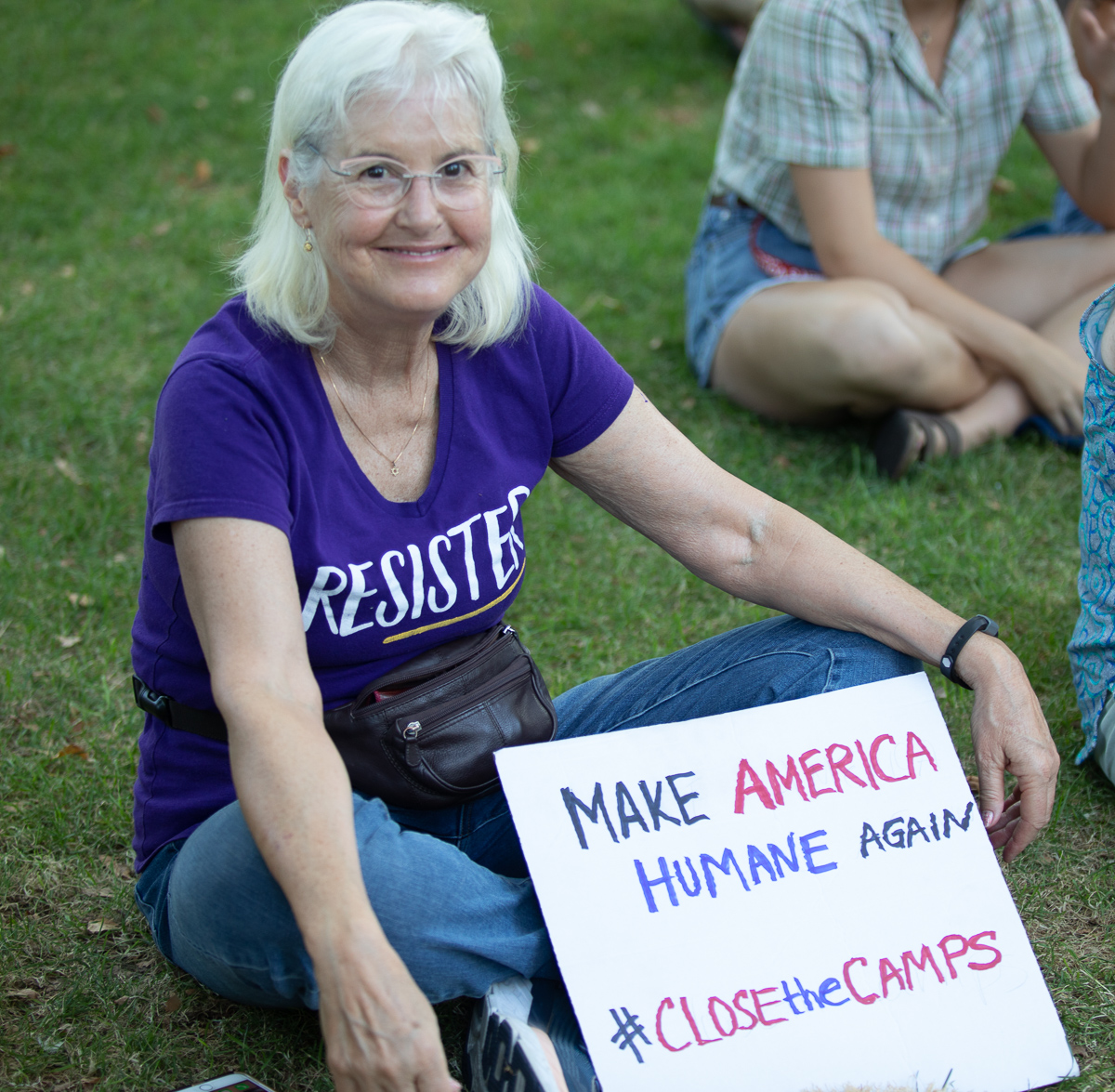 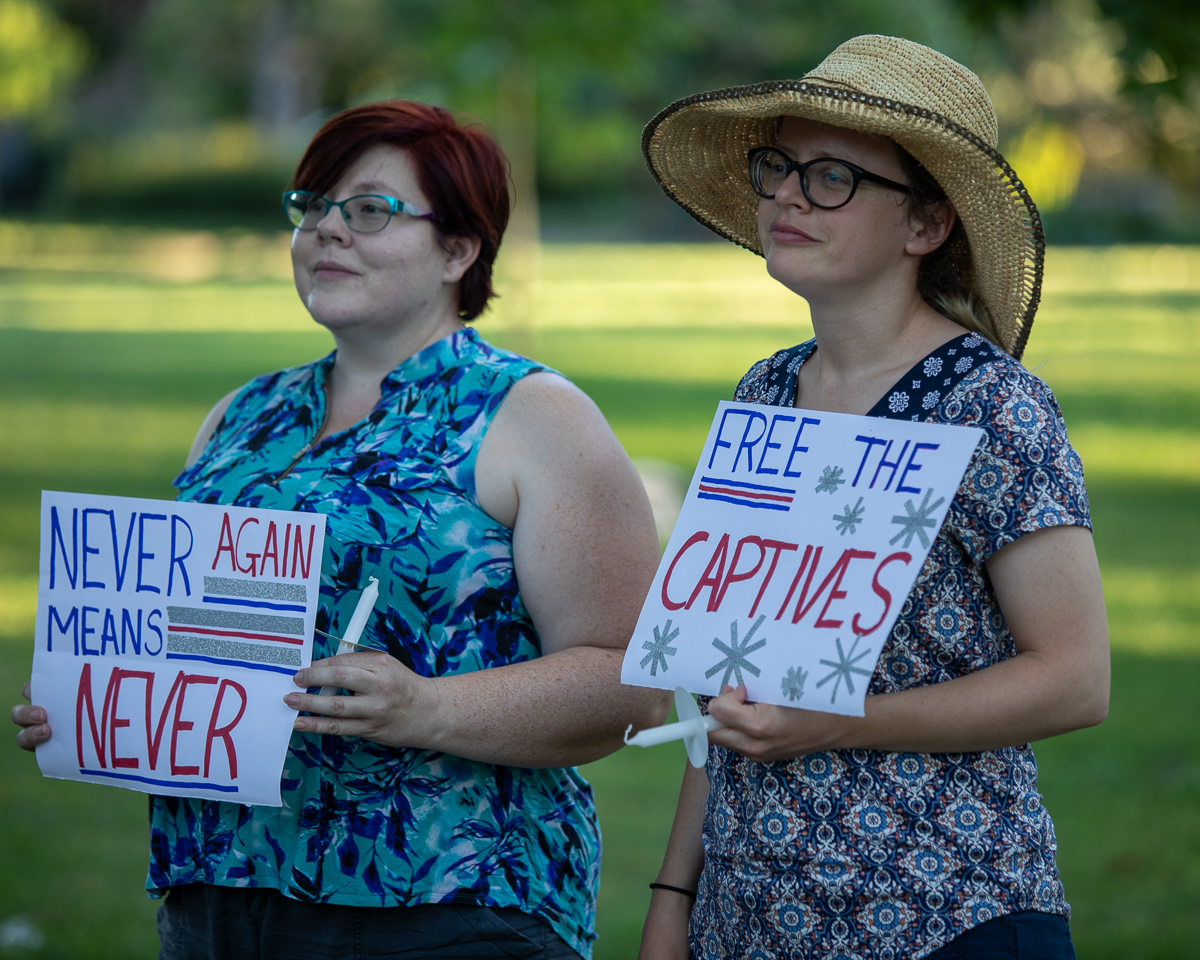 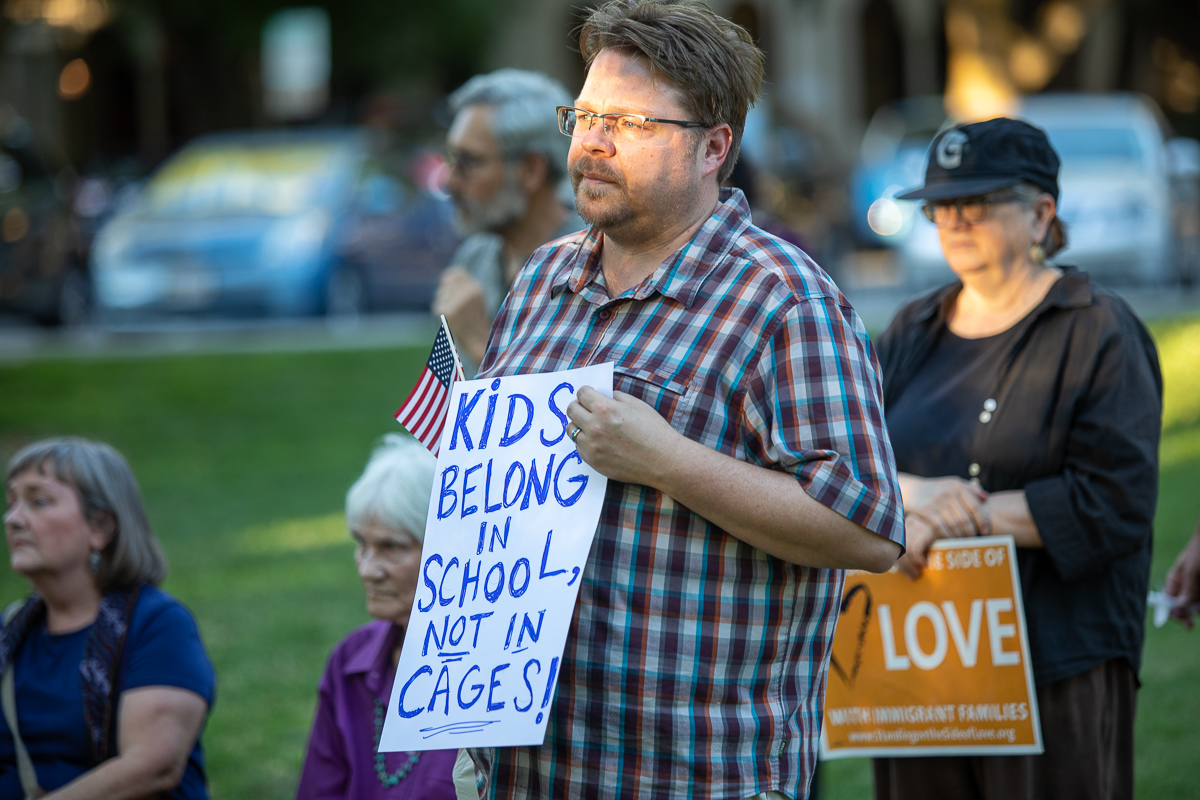 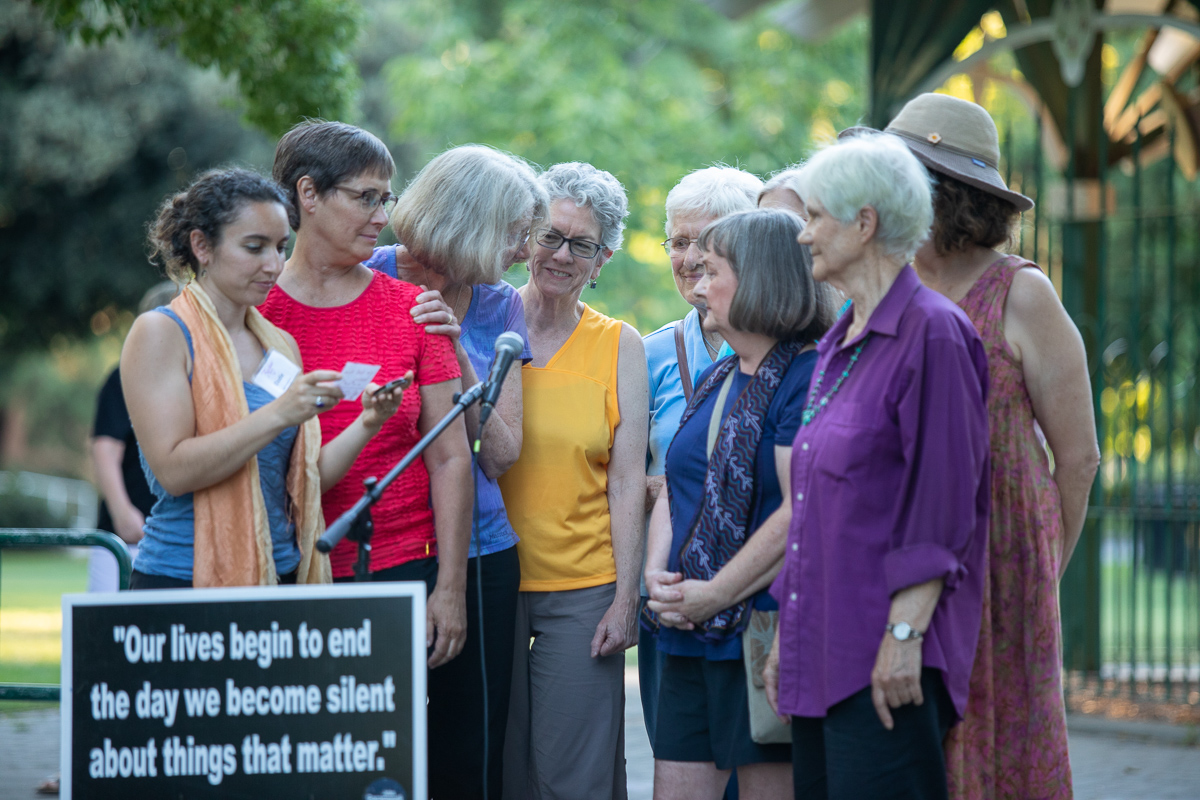