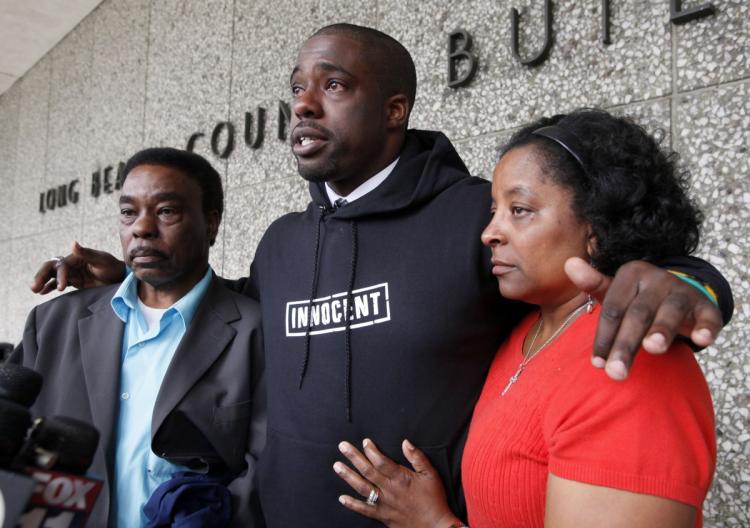 In 2012, Brian Banks made national news because at one point he was a top rated football recruit out of a prestigious high school program in Long Beach.  He committed to playing football at USC, but his dreams went down the drain when, in 2003, he was wrongly accused of rape by a classmate.

By all accounts this was a travesty.  The DNA evidence at the time he took the plea showed the girl had recently had sex – but it couldn’t have been him, as he was excluded by the DNA.

But it was too late for him.  The examiners had found that her trauma could have been consistent with rape.  The psychiatric examiners found him unsympathetic and unremorseful – probably because he knew he had not even had sex with her, let alone raped her.

He ended up taking a plea agreement and served seven years for a crime he did not commit before being exonerated post-release.  Once a promising young football star – that dream was gone.

The most controversial part of this, aside from the fact that the supposed victim fabricated the story, was the advice that Mr. Banks received from legal counsel.  His attorney advised him to take a plea, despite DNA samples showing that his DNA was not to be found on the girl.

I just read Brian Banks’ book which came out recently.  The defense attorney is always portrayed as the bad guy here. Justin Brooks, the director of the Innocence Project which ultimately exonerated him after he was freed, said it was definitely a case to take to trial.

“He got bad legal advice to take the plea,” said Justin Brooks. “The attorney should have taken it to trial. I can’t imagine not taking this case to trial. [Gibson] had

so many inconsistent statements.”

But it’s not that simple, in my view. At least as described by Brian in the book, the deal was not a straight up six-year plea.

Brian Banks in his book writes: “This deal, if you plead no contest to one count of rape, you’re to undergo what is called a ninety-day diagnostic. This ninety-day diagnostic will be at Chino State Prison. And what that means is you will be sent to Chino State Prison for ninety days. You’ll be placed in general population. You will live as an inmate for ninety days. During that ninety-day period, you will be interviewed by a psychologist and a counselor, and they will determine on a ladder system at that point whether you will receive one of three choices: felony probation, three years in prison, or six years in prison. And that’s it.”

The problem is that he ends up going before a judge and, despite an evaluation by a psychologist who believes him innocent, the judge gives him six years.

But the trial attorney made the agreement, believing she could walk her client in 90 days or face 41-year exposure.  Worse yet, he faced the prospect of a long trial.  Yes, he could have won, but he might have been free far sooner taking the plea than going to trial and risking it all.

Do I think a good attorney could have gotten him acquitted?  Yes.  The evidence was there between the DNA and the holes in the story.  But it would have taken resources that they may not have had.

Brian Banks did not use a public defender – which could have been an advantage in his case, because it would have given him access to investigators and experts that he might not have had with a private attorney.

His mother had to sell their house and car just to pay for the attorney.

It is not clear what kind of budget they had for investigators and experts.

This is not to let the defense attorney off the hook here.

Brian Banks did not get to make an informed decision.  He did not know exactly how the strong the DNA evidence was – he had no idea that she had had sexual activity and the DNA exonerated him completely.

Moreover, it is clear, at least as described in the book, he’s given ten minutes to make a decision, he’s barely 18 and his defense attorney won’t let him talk to his mom.

“I mean, no. You can’t talk to your mom,” she said. “You’re in an adult court now. You have to make adult decisions on your own.” I have always wondered how true this was. I’ve gone over it a million times in my mind: Couldn’t I speak to anyone I wanted? If I needed more time, couldn’t she have pressed the district attorney or gone to the judge for a ten-minute recess or even ask for a continuance? I’ll never know who was playing hardball here. I do know that my lawyer made me feel that I had no options. And I do know that her fears for what would happen if I went to trial were real.”

She clearly jammed him.

That said, the legal decision is not nearly as black and white as it appears in hindsight.  Was it a winnable case?  But what if the jury believed the girl despite the DNA?  He gets life.  He probably still ends up exonerated, but he would probably serve less time.

While this was a strong case for innocence, from his attorney’s perspective, she believed her client – well spoken and affable – would be a good candidate for immediate release.  That that didn’t happen, and definitely paints his situation in a different light.

But the real problem is the trial penalty, as the penalty for going to trial was steep – 41 to life.  That is an issue which Rachel Barkow, who will be speaking on Wednesday at the law school, raises in her book.  The trial penalty is really what convinced his attorney and ultimately him not to roll the dice – even in a case where he was clearly and provably innocent.