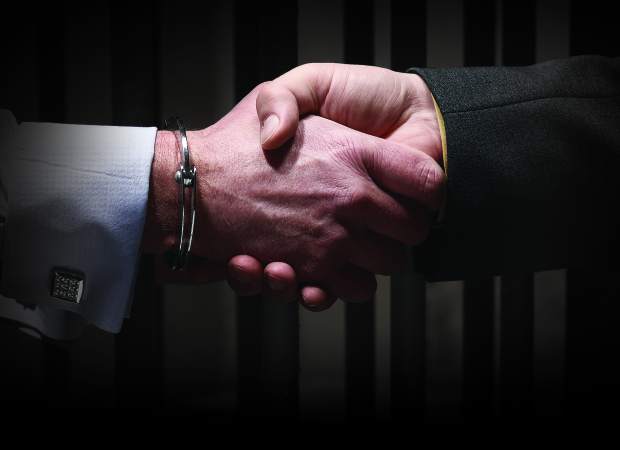 Next week Rachel Barkow will speak at the UC Davis Law School. One of the points that she has raised in her book that she will be discussing next week is the cost of trials – there is a penalty when a defendant exercises their right to go to trial.

However, now there might be a cost to taking a plea bargain as well. We had heard previously that prosecutors were attempting to prevent plea bargainers from taking advantage of new criminal justice reforms – the Marshall Project this morning has a story on that.

They report on a case out of San Diego where prosecutors offered the defendant a deal after a jury deadlock – “plead guilty to manslaughter and spend just 11 years in state prison.”

But there was a catch. “As part of the agreement, Sanchez had to sign away his right to benefit from any future legal changes, including legislation or court decisions that might reduce his sentence. He agreed.”

The article reports that the DA’s office in San Diego has proposed two other such deals – both in murder cases – but the offers in those were not accepted.

The Marshall Project reports that this is a way that prosecutors have been attempting to undercut sentencing reforms, by making it so that some of the sentences are not retroactive.

However, legislators are fighting back. Assemblyman Reggie Jones-Sawyer introduced AB 1618 in mid-June which is designed to preserve the integrity of agreed-upon plea bargains.

“As Chair of the Assembly Public Safety Committee I am committed to ensuring equal access to the benefits of legislation and propositions that update our criminal justice system,” said Assemblymember Jones-Sawyer. “The voters, the Governor, and the Legislature have shown time and time again that there is a desire to ensure that our justice system reflects our values of fairness and justice.”

From the press release: “Recently, local prosecutors have begun to draft plea agreements that include waivers of future legislation, even if unknown to all parties at the time the agreement is entered.

“Plea bargains are entered into by defendants and prosecutors to provide an expeditious resolution to a case. In exchange for pleading guilty or providing helpful information to law enforcement, plea agreements are offered by prosecutors to avoid the time and expense of a full trial.

“These agreements include agreed upon punishments, accepted by both the prosecutor and the defendant. These plea agreements have historically been recognized by courts to be subject to change if the state Legislature, or the voters, amend state law.”

“We applaud Assemblymember Jones-Sawyer for sponsoring AB 1618 to make it clear that prosecutors cannot enforce plea bargains that thwart the will of California voters and their elected representatives,” said Margo George. “Recent changes in our laws reflect advances in science about human brain development and evidence-based research about the societal effects of mass incarceration.”

“In 2013, the California Supreme Court settled the issue of pre-emptive agreements in plea bargains by stating clearly that parties entering a plea agreement are not insulated from any future legislation,” said Assemblymember Jones-Sawyer. “I will work closely with my colleagues to clarify the effect of legislation on plea agreement entered into by defendants and prosecutors alike.”

Are these agreements legal?

The Marshall Project spoke to Robert Weisberg, a criminal law professor at Stanford. He’s skeptical about the legality of them.

He pointed out that plea bargains are required to be “knowing and voluntary” and Professor Weisberg wonders if a person can give up rights to something that doesn’t exist yet.

“This one is pushing the envelope as far as it can go,” Weisberg said. “It’s a pretty slick and aggressive prosecutorial move.”