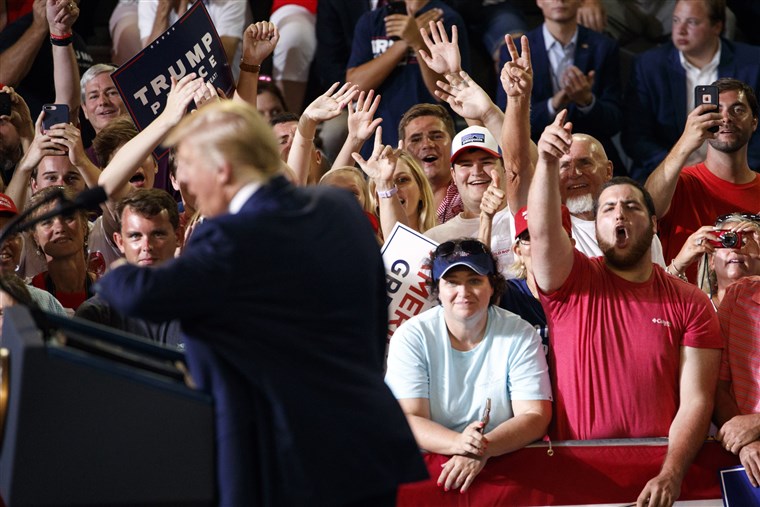 Following the president’s tweet attacks on four liberal Democratic women of color and the backlash against the crowd chanting “Send her back,” which caused the president at least some consternation, there has been a lot of talk about whether this strategy will work.

The truth is the pundits don’t all agree.

Veteran and well-respected columnist Ronald Brownstein writing in the Atlantic this week argued that his base is not nearly enough.  The writer argued instead, “The president needs the voters who approve of his record on the economy but disapprove of him overall. His racist attacks this week only hurt that cause.”

Mr. Brownstein points out, “Trump insists he is producing great results for the country, especially on the economy. And yet, at the price of provoking great backlash, he moved in an unprecedented manner this week to portray four nonwhite Democratic representatives as fundamentally un-American, not only ideologically, but also racially and ethnically.”

In so doing, Mr. Brownstein argues, “Trump has telegraphed that, ahead of 2020, he hopes to focus at least as much on the jagged divide of “Who is a real American?” as on the traditional question incumbent presidents seeking reelection highlight during generally good economic times: “Are you better off than you were four years ago?””

Mr. Brownstein argues that the President “faces clear evidence that he may be unable to build a winning coalition with just the voters satisfied with his performance in office. That’s evident even with an economy that’s booming, at least according to measures such as the low unemployment rate and the soaring stock market.”

But is that analysis correct?  Or is it actually reversed – is the reason that Mr. Trump is tapping into racial antagonism precisely because the normal bread and butter issues of the economy will not work for

a president who has defied all moral and normal conventions of the presidency?

Toward this end, the Bees’ Andrew Sheeler talks with UC Davis professor Carlos Algara, who along with political scientist Isaac Hale argues that President Trump has “relied on white racial resentment and outright racism to win elections and mitigate electoral losses in the 2018 midterm elections.”

In their study, they found that “racial resentment drove white voters, even those identifying as liberal or Democrat, to vote for Republican candidates.”  That effect is strongest among “lower-educated whites” and they don’t see any reason to expect this to change for 2020.

Indeed, some polls showed that following Trump’s remarks, support among Republicans actually rose five percentage points and, during the 2018 midterms, while the Republicans lost in the house, “racial appeals helped to stem the losses.”

The Republicans in 2018 lost districts that were carried by Hillary Clinton in 2016 but “they were able to hold onto the Senate by winning in conservative-leaning states like Florida, Missouri, North Dakota, and Texas.”

This is basically a tradeoff.

“Quite frankly, I think it’s a doubling down strategy. … This (strategy of racial conservatism) is going to help them in the Senate. We saw that in 2018. The Senate battleground is becoming smaller,” Professor Algara told the Bee. “I think Republicans are going hunting where the ducks are.

“Activating racial resentment drums up support not only for Trump but also for Republican candidates down the ticket,” he added.

Meanwhile, an analysis of the electoral college in the New York Times this week shows that Trump could have an even larger electoral college advantage than he had in 2016.  This doesn’t mean he will win necessarily, but it means, “Re-election looks plausible even with a bigger loss in the national popular vote.”

Writes Nate Cohn of the Times: “That persistent edge leaves him closer to re-election than one would think based on national polls, and it might blunt any electoral cost of actions like his recent tweets attacking four minority congresswomen.”

The key is the mostly white, working-class Rust Belt states which proved decisive in 2016 when they flipped from a narrow Democratic advantage to Trump’s favor.

Writes Mr. Cohn: “The Democrats have few obviously promising alternative paths to win without these battleground states.”  Moreover, the president has retained his advantage in the Sun Belt: “The president’s approval ratings remain higher in the Sun Belt battlegrounds than in the Rust Belt, despite Democratic hopes of a breakthrough.”

That leaves us with the campaign focusing on things like immigration, trade and, of course, racial polarization.

Writes Mr. Cohn: “A strategy rooted in racial polarization could at once energize parts of the president’s base and rebuild support among wavering white working-class voters. Many of these voters backed Mr. Trump in the first place in part because of his views on hot-button issues, including on immigration and race.”

The bottom line is there is a method to this madness – it is his path to victory even if it threatens to further polarize the country, not only by race but by location.

With that said, there are several key points that I think a lot of pundits are missing.

First is that even though the president has a relative advantage here in the Electoral College, Mr. Cohn points out that alone “does not necessarily make him a favorite to win. His approval rating is well beneath 50 percent in states worth more than 270 electoral votes, including in the Northern battleground states that decided the 2016 election.”

Trump basically won an inside straight in 2016.  He relied very heavily on an almost historic collapse by Hillary Clinton under the weight of her own struggles.

A key question will be: was Hillary Clinton’s performance unique to her particular problems or did she end up closer to where a typical Democrat would?

That said, the clear strategy is negative polarization.  And that is what we are seeing – President Trump it attempting to pull off whites who are uncomfortable with racial issues.  If it works, it seems he has a narrow path to victory.

Share:
Tags:Election 2020ImmigrationPresident TrumpRaceWhite Voters
Previous : Should DC Residents Get the Benefits of Full Citizenship?
Next : Sunday Commentary: What If They Violate the Rights of Someone Who Clearly Did It?