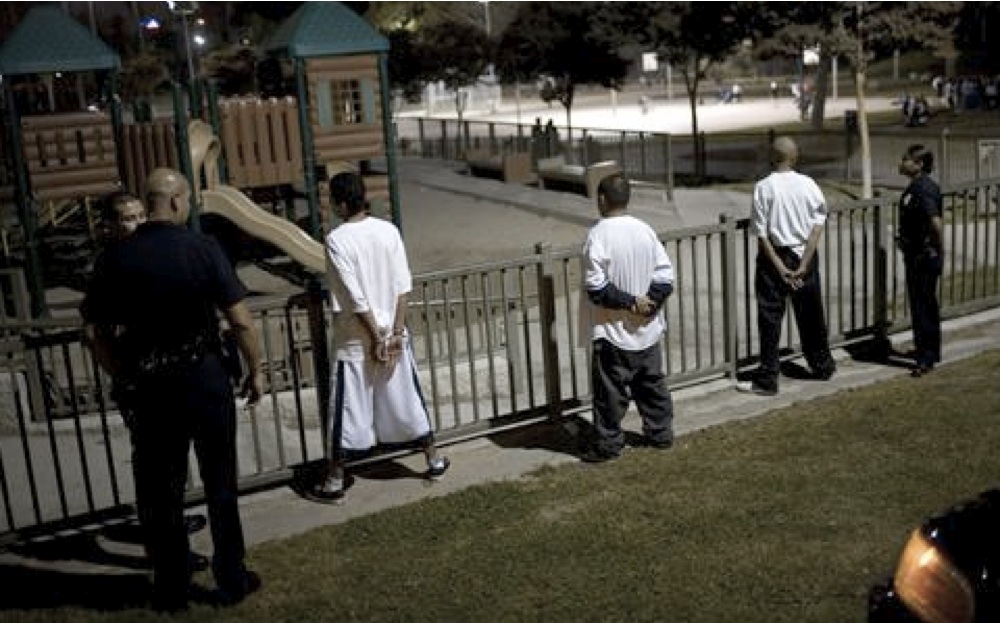 by the Daily Appeal

An NYPD database labels over 18,000 people in New York City as active gang members. Three of the people labeled this way are 13 years old, and more than 400 others are under 18. Nearly 99 percent of the people whose names are in the database are people of color. Nearly 88 percent are Black or Latinx.

If your name is entered into the database, you have no way of knowing about it and no way of contesting it. The NYPD does not notify people when it classifies them as gang members and there is no mechanism for challenging the designation.

Numerous groups have questioned the constitutionality of the database and called for an investigation into it. Last year, the Legal Aid Society of New York launched a website to assist people with requests under the state’s Freedom of Information Law to find out whether their names were in the database.

The latest figures about the NYPD’s database came from police officials at a hearing before a City Council committee last week. A recently introduced bill would require notification when a minor is included in the database. Police say this would compromise their policing goals. Some critics of

the database say the bill does too little.

Across the country, people have been calling for significant reform of, or even an end to, gang databases and gang policing measures. The criticisms are similar—about a process that defines gang affiliation too broadly, carelessly criminalizes people of color, and exposes them to wrongful arrests, convictions, and deportations.

In Chicago, where there is a police department database and a sheriff’s regional database, there have been numerous efforts to end their use entirely. This year, the Cook County Board of Commissioners passed an ordinance to end use of the regional database and pave the way for its eventual destruction. The database included 25,000 names.

The Chicago Police Department database is several times that size, containing the names of an estimated 128,000 adults and at least 33,000 young people 17 and younger.

Reporting by ProPublica revealed glaring errors in both the police department database and Cook County regional database. The county database included hundreds listed as dead or having no known gang affiliation. The police department’s database, as of last year, included two men listed as 132 years old and several 118-year-olds.

The errors can have devastating consequences for those included, particularly as deportation efforts have been ramped up under the Trump administration. In 2017, ICE agents raided Wilmer Catalan-Ramirez’s home and violently arrested him (despite his partial paralysis from being shot three weeks earlier). He was placed in deportation proceedings. Catalan-Ramirez’s attorneys eventually learned that his arrest was the result of the Chicago police including him in the database and designating him a gang member—of two different, and rival, gangs. The city eventually admitted its mistake and Catalan-Ramirez was released from ICE custody in January 2018.

Across the country, there have been instances of alleged gang affiliation being treated as a factor in immigration proceedings, bail decisions and sentencing, and treatment when in jail or prison.The NYPD maintains that it does not share information with other agencies but numerous attendees at last week’s hearing said they had experience to the contrary.

The problem with gang policing and databases is not just the vast potential for error. In an opinion piece in the Houston Chronicle in January, Alex Vitale cautioned against a doubling down on punitive gang policing tactics, in Houston and across the country. Vitale, a professor of sociology at Brooklyn College, wrote: “The intensified policing of gangs using gang databases, injunctions, enhanced sentences and broad conspiracy charges relies on the same tough-on-crime logic that has driven much of the massive increase in incarceration over the last 40 years. It assumes that deterrence and incapacitation are the only ways to change the behavior of young people and that any young person who engages in almost any kind of violent behavior is a hardened sociopath with no possibility for an alternative future.”

K. Babe Howell, a law professor at the City University of New York, has also been a vocal critic of the NYPD’s gang policing. She has criticized the City Council bill as insufficient and premature, calling for an investigation into gang policing tactics first. In a report released earlier this year, Howell, along with Priscilla Bustamante, looked at the mass indictment of the Bronx 120 in 2016, after what federal prosecutors celebrated as the “the largest gang takedown in New York City history.” (“Raided,” a documentary from The Appeal by Simon Davis-Cohen, looked at the Bronx 120 raid and the NYPD’s pivot from its unconstitutional use of stop-and-frisk to a new era of “precision policing.”)

Howell and Bustamante looked at publicly available information to understand who the Bronx 120 were. What they found was that, far from being the “worst of the worst,” “51 of the defendants … were affirmatively not alleged to be gang members.” Despite then-U.S. Attorney Preet Bharara’s statement on the day of the raid about “allegations of multiple murders, attempted murders, shootings and stabbings, committed in furtherance of federal racketeering conspiracies,” none of the 120 people arrested was charged with murders, shootings, stabbings, or any violence. Thirty-five of the convictions that resulted were based on marijuana sales.

Reporting on the Bronx 120 raid this year, Alice Speri of The Intercept told the story of Kraig Lewis, a Bronx native who was close to finishing his MBA when police came to Connecticut to arrest him in 2016. The judge at his arraignment told him and others that they could face “the death penalty.” At one point the prosecution’s plea offer was to a sentence of 12 years. After 22 months in pretrial detention and away from his child, he pleaded guilty and was released on time served.

Lewis testified before the City Council last week about the devastating effects of being arrested, incarcerated, and now having a felony conviction, The Intercept’s Nick Pinto reported. He addressed his remarks directly to Donovan Richards, sponsor of the database bill and chairperson of the council committee.

“I was swept up in a federal gang sweep due to my childhood interactions with my friends,” he said. “My evidence was Facebook posts, music videos, and the government’s interpretation of my wiretap. I had no criminal record and I was in grad school when they came for me. I had one more semester left to becoming someone like you.” He continued: “I say ‘you’ because you’re a black man. And I wish I could be you, but I can’t now, because of what they did to me.”