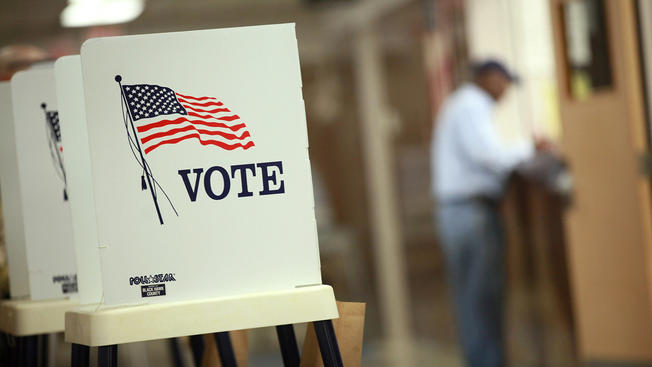 Under the California Voting Rights Act (CVRA), a political entity such as the city of Davis is prohibited from from using any at-large method of election that “impairs the ability of a protected class to elect candidates of its choice or influence the outcome of an election, as a result of the dilution or the abridgement of the rights of voters are members of the protected class….”

As such, an at-large voting system violates this standard when “racially polarized voting,” or RPV, exists.

Here is the key, as attorneys Derek P. Cole and Sean D. De Burgh write on the California Special Districts Association website (CSDA): “RPV exists when there is a difference in how members of a protected class vote versus

members not within the protected class.”

Matt Rexroad told the Vanguard they have found about a dozen really solid examples.  Under the law, RPV is not just determined by how the electorate votes in elections involving the city council, but rather any election.

For the purpose of illustrating this, we will demonstrate two clear examples.

In the Davis City Council race, the battle between Gloria Partida and Dan Carson for mayor came down to the Latino vote. 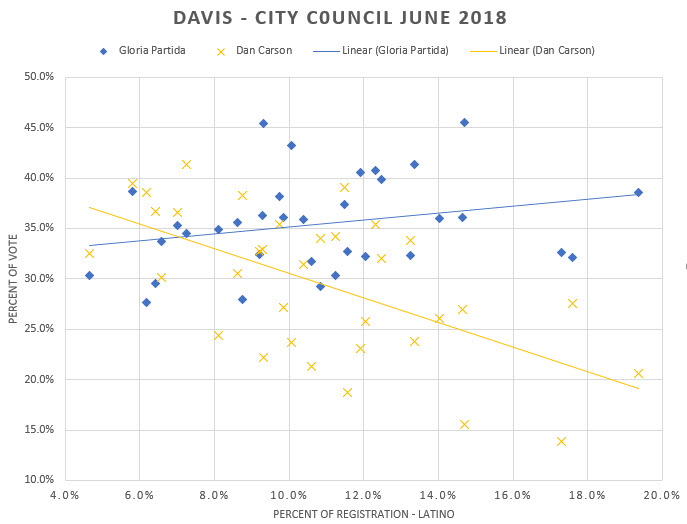 In the Senate battle between Diane Feinstein and Latino challenger Kevin DeLeon – the longtime Senator dominated in the precincts where Latinos were in the single digits, but as the Latino vote increased, the margin narrowed.  On the high end, it was more than 60-40 in favor of Senator Feinstein.  At the 20 percent end, that narrowed to less than 55-45. 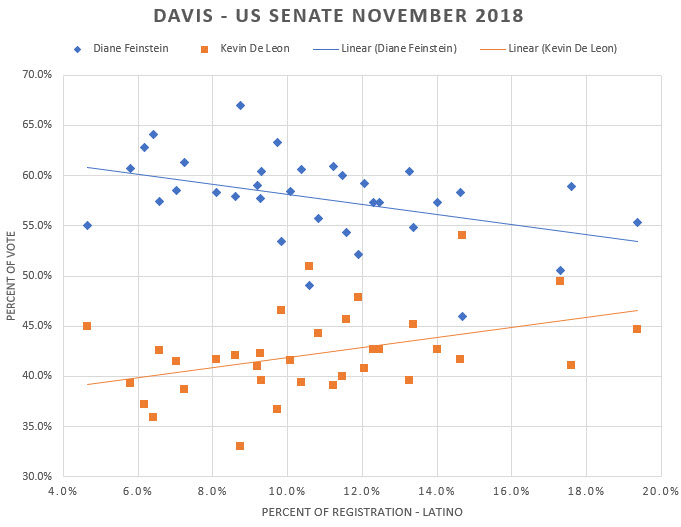 According to Mr. Rexroad, “If we show RPV — then they have to go to districts.”

The key point he made to the Vanguard is if they go to court and show RPV: “Then the statute only provides one remedy — go to districts.”

Some have suggested other remedies, but going to district elections is the only remedy under the law.

Mr. Rexroad said, “Look at Dan Carson…the slope of his line is steep.”  He added, “Look at Feinstein and KDL — the slope is what matters.  If no RPV the lines would be flat.  They are not flat.

“Bob Dunning assumes they are flat. He is wrong,” he stated.

He adds, “I really don’t know how the city says they don’t have RPV with what we know.”

Part of what these numbers demonstrate is the impact that moving from a district that has a 4 percent Latino vote to a district that is 20 percent of the Latino vote has for Latino candidates.  Consider that one does not need a majority in the district in order to make a huge difference in the outcome.

Also, consider that the council race usually has entailed multiple candidates – not simply two.  Each additional candidate increases the chance in a district election of a minority candidate to win.

As Mr. McDermott explains, the model didn’t work in California, precisely BECAUSE the Latinos, the group most often challenging at-large elections, “are not typically residentially concentrated, voting is less polarized and the electorate is more diverse.”

Indeed, he noted, that FVRA (Federal Voting Rights Act) cases failed, because a majority Latino district could not be created as required under the federal system.  Or it failed “because Latinos were winning in at-large systems as well as or better than was predicted under a district system.”

Note that the CVRA then was created precisely for the reasons that naysayers are claiming we do not need district elections in Davis.

Here are the elements.  First, anyone from any racial, ethnic, or language group can sue and challenge an at-large election system.  Again, all they must prove is RPV.

Moreover, “Unlike the PVRA, the CVRA does not require proof that RPV actually results in the defeat of a group’s preferred candidate.”  In other words, the RPV does not need to result in the electoral defeat of a minority.  Therefore, the fact that Gloria Partida won is not sufficient to invalidate a claim of RPV.

Does Rexroad have enough to win?  We will probably never know.  Most likely the city won’t risk the cost of going to an election where the chance of prevailing is very small and where the act of challenging is itself problematic.

23 thoughts on “Analysis: Rexroad Believes He Has Enough to Prove RPV in Davis”