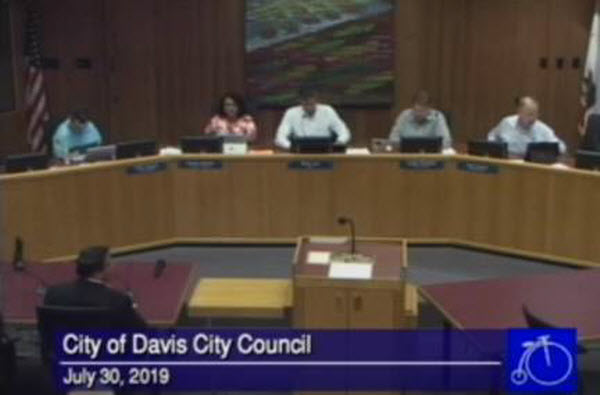 If you were at City Hall after midnight Tuesday you could see decency in action.

I was at the City Council meeting at 12:20 am. I’m retired, so I had the luxury of staying to speak on a minor item on Trees, the last item on the agenda.  This was nearly 7 hours into a meeting that began at 5:30 pm. It had run continually with only a few bathroom breaks. Council had eaten at their desks.

Council & staff began discussing an agenda item a new homeless respite center. A place so these folks could be off the street, out of the heat, smoke, rain, etc. during the day. A place to wash, bathroom and store their stuff.  Where to put it?  What services to offer?

I looked around, and noted –still in the council room after midnight — was not just council and supporting city staff but also 15 Davis residents who stayed up to make a public comment on the issue. I watched as they provided useful input on the different options for the homeless center.  To altruistically advocate for Council to take action to help the neediest in our community.  (Ed note: Even

David Greenwald of Vanguard had gone home to watch video on TV).

You will see this agenda item noted in the Enterprise and Vanguard news stores, but you won’t see the pathos of this midnight scene conveyed — because it’s not news in Davis.   Rather it’s common for people to advocate for the betterment of people among us who struggle.

As I watch the scene at midnight before the council, I thought of how it contrasted with the dark rhetoric of Trump that has filled the national media. Most recently, Trump attacking the American city of Baltimore for having problems.

Just as he has attacked the City of Chicago for having problems.

Attacked Puerto Rico while it staggered to recover in the wake of the hurricane.

His worse-than-indifference treatment of refugee crisis at our southern border, of people fleeing what he labeled “shit hole” countries.

This is what is common for Trump. His verbalized schadenfreude. Curse the weak, the victim.

This rhetoric is what inspired the clergy of the Washington National Cathedral to write a public letter last Tuesday rebuking Trump’s attacks on his fellow humans who struggle.  The clergy asked, “where is his decency?”

But they also asked the rest of the USA where is our decency that we tolerate Trump’s rhetoric?

In Davis, you can find this decency in many places, Council meetings are a good place to start.

But it’s time that we more often note the pathos of this common behavior in our local Davis media as the antidote to Trump.

But beyond this, our local Davis scribes- and citizen letters to editor writers  — to should answer the call from the Washington National Cathedral to overtly reject Trump’s behavior.

Silence is acceptance of Trump’s Rhetoric, the clergy’s letter states.