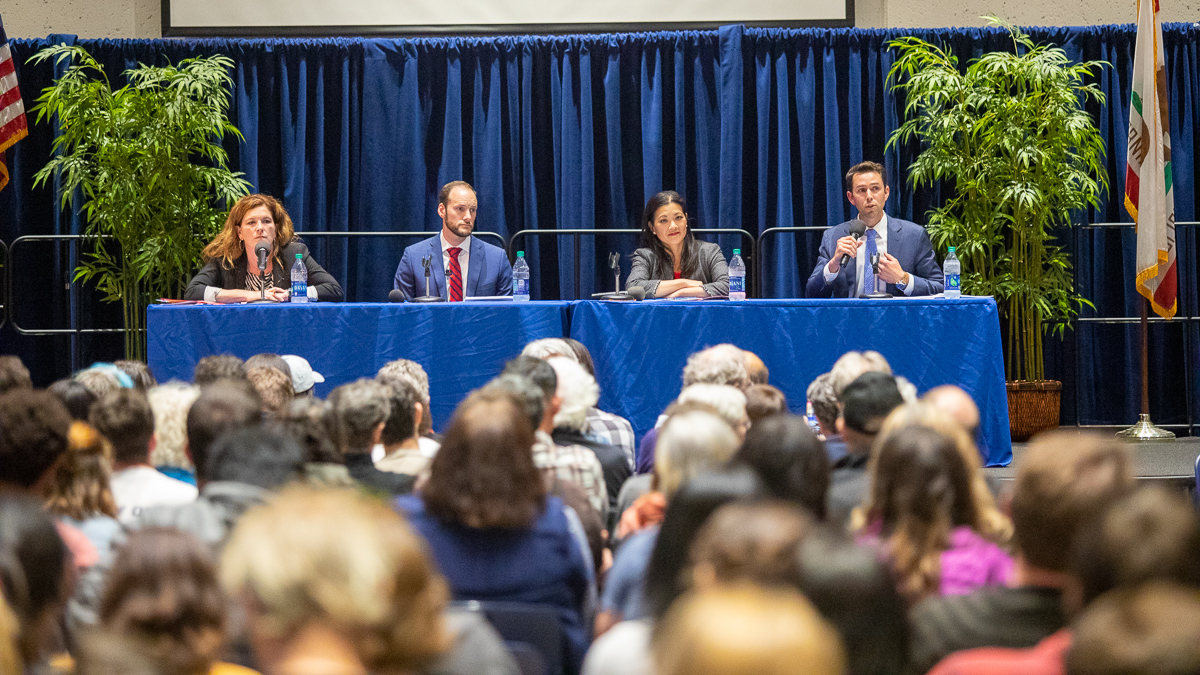 All four candidates: Chesa Boudin, Leif Dautch, Suzy Loftus and Nancy Tung participated.  Organizers estimated 350 people were in attendance.  The forum was moderated by Yoel Haile of the ACLU.

In response to a question on mass incarceration,

Suzy Loftus acknowledged it’s “that’s broken, it didn’t work and it destroyed families.  Exacerbated racial disparities and was a failure.  So the question is – how do we do something different?”

At the same time, she defended the San Francisco system, noting that in a report that came out last year, “San Francisco

She said, “San Francisco is leading the way on building out alternatives to incarceration.  What we have to continue to do is build out shared safety.”

Ms. Loftus said she supports things like neighborhood court as a way to “reduce our footprint of mass incarceration by building out restorative justice – which at its heart is about accountability.”

This she said, “centers on the victim and says something was wrong here, how can we make it right, and none of that involves incarcerating.”

Chesa Boudin told the audience, “I’m going to stand up like I’ve been standing up to fight mass incarceration my entire career. “

He added, “One of the things I have done as a public defender, every day, is fight to reduce mass incarceration.  I haven’t just done it one case at a time.  I have done systematic impact litigation trying to change a system that we all now recognize is unjust.”

Mr. Boudin was critical of the current system, stating, “, I don’t believe we can trust or rely on people who are part of the problem to do it.  We have a long legacy of people who have chosen to become prosecutors sending more mostly brown and black young men to prison. “

He told the audience, he is going to do three things.  First, he said he would end three-strikes sentencing, “because there’s no room for baseball in the courtroom.”

“close juvenile hall and county jail number four because we are safer when we invest in education rather than incarceration,” he said.  “we’re going to stop charging money bail because it’s discriminatory, it makes us less safe, and it contributes to mass incarceration.”

He said, “If we think outside the box, then we can close the box and actually make our community safer while ending mass incarceration.”

Nancy Tung said that she had 18 years as a prosecutor, which drew a negative response from someone.  Like Ms. Loftus, she defended the current system in San Francisco.

She called diversion, “a really valuable tool that we continue to proselytize about the way that do things in San Francisco,” and said that we should continue “to show that we have programs in county jail to help rehabilitate and educate people and we continue on in the way that we as San Franciscans know how to be just and fair to everybody involved in the system.”

For him, “The reckless way is just to let tens of thousands of people out of prison having done nothing to address underlying root causes.  And then to throw up our hands if there’s a spike in crime.  Historically we’ve done that as the pendulum has shifted back and forth.”

Instead, he wants to do reform in a thoughtful, which involves “drilling down to root causes.”

He noted for instance with the juvenile justice system they were able to go from 150 kids there a decade ago to 32 now.  He said, “Which is why we can shut it down, which I fully support and we can transform that juvenile hall into a mental health justice center to give folks on the street the mental health services that they need.”

He wants to see that model replicated elsewhere.

The next question focused on how the DA’s office should handle officer-involved shootings and police brutality.

Chesa Boudin talked about an incident in which a group of white police officers arrested an African American man.  He took out his phone and started videoing it.

“That turned into a video that more than 7 million people have watched, it’s a “know your rights” video that illustrates the ways in which police on the streets of San Francisco violate people’s rights,” he explained.

He said that we need to work with the police, but the police need to respect the law.

“When they don’t we need an independent district attorney who’s willing to enforce the law equally,” he said.

He said as DA, he would personally make charging decisions in every officer-involved shooting case.

Mr. Boudin said he would, “throw out evidence in cases that are marred by racial bias, excessive force, or other police misconduct.”

Finally, he called for a transparent process so that the public knows exactly what to expect.

Nancy Tung said that “I’m the only person on this stage who in a criminal context has investigated and prosecuted police officers for misconduct.”

Her examples were an off-duty officer who committed acts of domestic violence.

“I prosecuted that cop and I won that case at trial,” she said.

She also prosecuted a Sheriff’s Deputy, accused of mistreating a patient at San Francisco General Hospital.

“So when talking about police accountability, you can look at me, because I have a track record that shows you that I can work with police, but I also make sure that they are accountable for they do,” she said.  “We walk a fine line but we need to make sure that when that line is crossed, that the district attorney’s office is holding those people accountable.”

Leif Dautch said, “even one officer-involved shooting is too many.”  He said, “If police officers engage in misconduct they have to held accountable.”

Mr. Dautch said he met with a group that had lost family members to police violence.  They identified three main problems with the status quo for how these cases are being handled.

He said, “I vow to make a charging decision in an officer involving killing within six months.”  He added that he would hold a town hall to explain his decision.  And he said, “I’m going to consider every possible charge – it isn’t just a murder or nothing.” 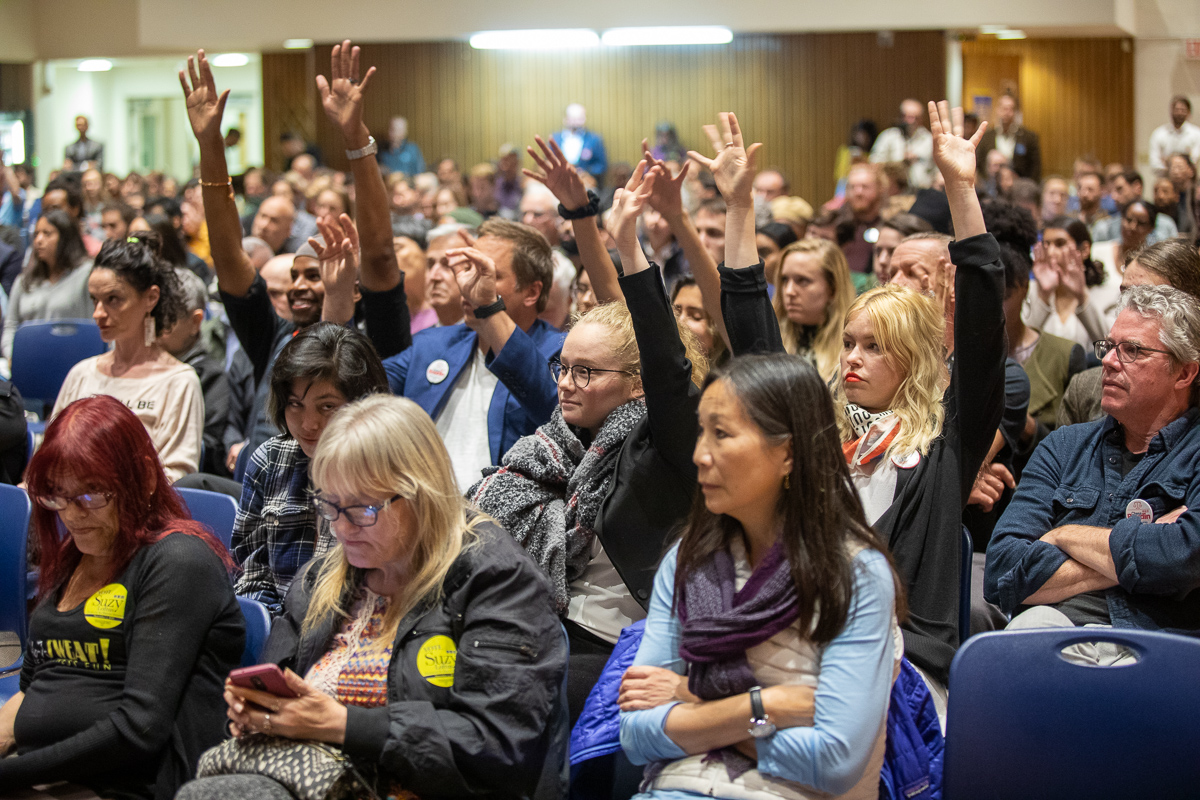 Mr. Dautch added, “It is important that we have a district attorney who is independent and able to work with law enforcement.”

During her time on the commission, “I terminated more officers for serious misconduct that have ever been terminated in the history of the San Francisco Police Commission.”  She added that she made sure that every officer has a body-worn camera.  Finally, she reformed the use of force policy for the first time in 20 years in conjunction with the San Francisco Bar Association and ACLU.

“Holding police accountable takes all of us and you don’t have to guess what my record will be on that because the San Francisco Examiner called me the face of police reform,” she said.

“It’s still a specialized prosecution to hold law enforcement accountable,” she said.  And like the others, she called for more transparency.  She concluded, “If we don’t trust the police, they cannot serve us.”

The third question asked them to address racial disparities and racial bias in the criminal justice system.

Nancy Tung said that George Gascon’s policy for eliminating racial bias is “an interesting thing that I’d like to see the results of.”  She wants to see if there’s a difference not looking at race for making charging decisions and plea bargains in the system.

Ms. Tung argued that we need to go into populations and “addressing what are the root causes of criminality.” 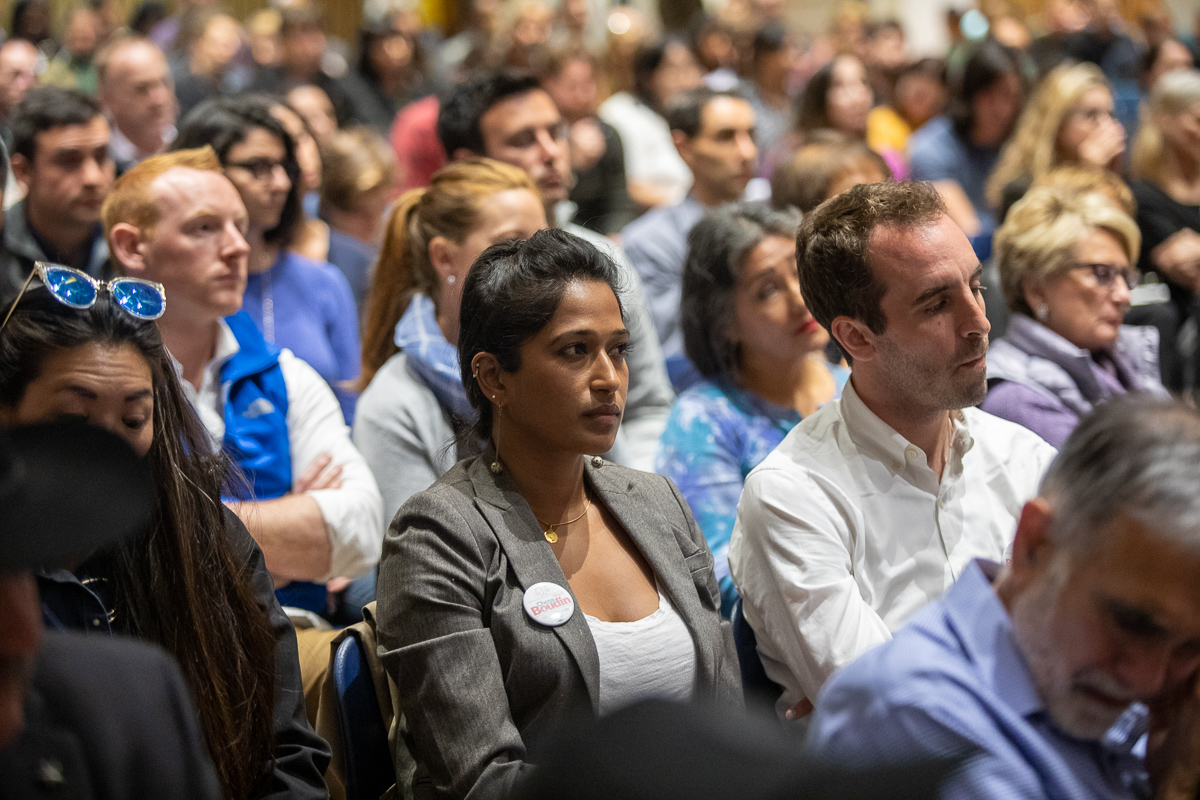 He noted that while they’ve done a good job of reducing the juvenile hall population down to 32 – but said, “over 90 percent of those 32 are kids of color.”

“We have to be laser-focused on this issue and not just be passive and assume that the benefits of reform will inure to everyone,” he said.  He supports the race-blind charging policy and called for implicit bias training.

She said she told a group of prosecutors, “I know you didn’t take this job to exacerbate racial disparities.  But that’s what’s happening.  And it’s happening on your watch.  You’re charged with being the people’s lawyers, so it’s on you to say not on my watch, I’m not doing this.”

She called for “an unflinching audit of the practices of the district attorney’s office.”

“There are many touchpoints where prosecutors have to look at themselves and say how can we eliminate bias as it grows,” Ms. Loftus said.

But she added, “People of color are also 15 percent more likely to be victims of crime.”  She noted the largest homicide rate is African American women.  She said, “part of what we have to talk about is how we’re failing communities of color across the board.”

Chesa Boudin said, “the racism is based on hundreds of years of institutionalized oppression of people of color who have been systematically excluded…”

“It is going to be a hard job to fix it,” he said.  “It is not enough to have a district attorney who simply isn’t racist.”

He said, “We need not just be not racist, but anti-racist.”

Mr. Boudin said they need to “recognize that there is racism at every single step of the criminal justice process.”    He said, “We need to be committed to not just be race-neutral, but to righting the historic wrongs.”