In the year 2000 the World Health Organization (WHO) ranked countries’ health care system outcomes according to things like life expectancy, infant mortality rates, vaccination rates, patient satisfaction, and so on. The U.S. ranked 37th, between Slovenia and Costa Rica. The Sacramento Bee said it was as though the U.S. had the healthcare of Costa Rica and paid six times more for the privilege. A member of my team (team “blue,” the liberals) heard me say this, and responded, “That’s your opinion!”

Astonishing! I thought: Does she think I’m the WHO? The Sacramento Bee? My opinion?!!! What can she mean?

However the astonishment prizewinner came from team “red” (conservatives). A Republican activist went on at length about how Republicans haven’t always lived up to their ideal of “Fiscal Responsibility™,” and how he wanted them to do that. I thought: How can you say that with a straight face? “Responsibility” means balancing a budget to you, and Republicans haven’t balanced a budget since Herbert Hoover! …which worked out ever-so-well.

A more accurate portrait of recent Republican fiscal policy is Ronald Reagan’s. The Reagan administration cut the top marginal tax rates in half, and between Reagan and Bush 41, they  increased payroll taxes eightfold…so a 50% tax cut for the rich, and an 800% tax increase for the poor. The resulting budget deficit was greater than the sum of all previous ones, and for Reagan’s trouble, the country got an average business cycle recovery.. 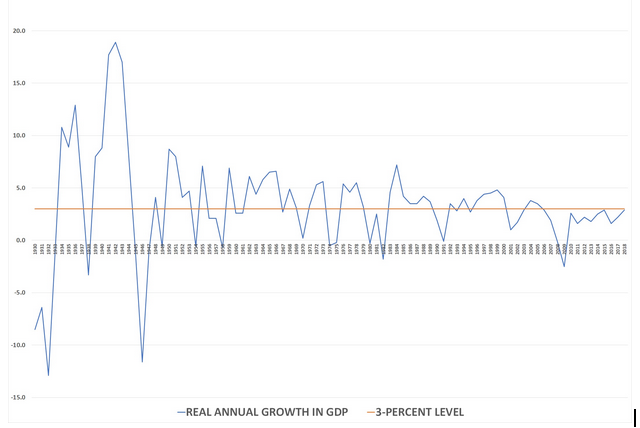 Reagan’s recovery is the peak in 1984. The big growth on the left occurred during that government-funded public works projects we know as the New Deal, and “World War II” Source: Bureau of Economic Analysis (bea.gov)

Rather than balancing the budget, Republicans got the government to subsidize their patrons, the creditors. Far from “responsibility,” Republican operative, Wall Street Journal writer and Supply Side economics promoter Jude Wanniski suggested this “Two Santa Clauses” tactic: Run up as big a budget deficit as possible when in power, then complain as bitterly as possible about the deficit when out of power. Republican Dick Cheney famously said “Reagan proved deficits don’t matter.”

The propaganda-fest where these issues came up was part of a Better Angels organization workshop. Better Angels promote polite civic engagement. Says The Atlantic: “Rather than seeking a centrist compromise, Better Angels is treating division as a given—and trying to foster conversations across [that division].”

debate, and got acquainted first hand with the bitter partisanship that besets American politics now. After that, he formed the Better Angels organization to promote civility.

Tab Berg, one of the staffers at the local workshop assured me that Better Angels solicits equal funding from both right and left-leaning foundations, although their website is silent about financial supporters. Berg himself is a right-leaning political consultant who has advised Sue Frost, among others. Even if Berg is truthful, the definition of right and left remains vague here, so skepticism about Better Angels’ political neutrality remains warranted.

The structure of the Better Angels workshop is straightforward: Members of “team red” and “team blue,” invited in equal numbers, hold a moderated discussion about why their policies might work better, how they have stereotyped each other, and how they could better understand each others’ points of view.

As far as it went the workshop was a nice reminder that blue and red are really not separated by much, or, as Ralph Nader said, “There’s not a dime’s worth of difference” between the two major parties. Political opponents are human, and they may have a slightly different take on things, but, at least in theory and in proportion, the differences can actually inform rather than sabotage public policy decisions. Diversity can be an asset, as both sides agreed.

One surprising area of agreement was that government should be “Fiscally Responsible™” –that is, balance the budget and reduce government debt. But national ‘debt’ is like bank debt, not household debt. Just as your savings account is your asset, and the bank’s debt, so the dollar financial assets out in circulation are both the population’s savings, and the central bank’s debt. Reducing the national ‘debt’ impairs the population’s savings and injects fragility into the economy. It is a recipe for Great Depressions, too. Seven instances significant ‘debt’ reductions have occurred since 1776, 100% are followed shortly by Great Depression-sized holes in the economy. So balanced budgets are not a good idea, but between denial and confusion about accounting, no one in the workshop was convinced when told this.

In fact, I’d say that was one of the great flaws in Better Angels’ workshop. Most politically-interested people already have made up their minds. It’s nice to spread a little comity and courtesy, but no one in the workshop came close to admitting new information into their thinking, and the moderation meant fully exploring the context of arguments was impossible.

In my experience, the “tolerant” team (blue) was the most wedded to their preconceptions.  Perhaps the most intransigent of the blue team was a professional lobbyist for Citizens’ Climate Lobby who, when he learned I like Bernie Sanders, let me know that Democrats needed to nominate someone with broad appeal–i.e. not Bernie.

Never mind that several polls show Bernie would have kicked Trump’s ass in 2016…gosh, I wonder who could have “broad appeal”…? 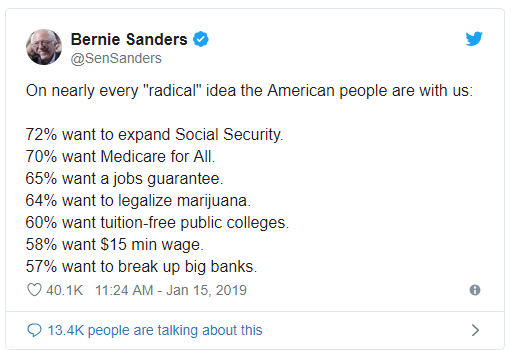 The entire workshop produced no confrontation of the political class’s lies, and no conversation about any game-changing policies. To be fair, statements like the one about how Republicans are Fiscally Responsible™ are not really made in the service accuracy. They’re more like a pledge of allegiance to the creditor class, who profit whenever Federal spending lags.

My personal take is that the political right (even the billionaire “left”) sponsoring these workshops has figured out they have moved the respectable public policy options as far to the creditor-friendly right as they can for now, and the incivility provoked by those policies could be dangerous, even for the plutocrats, so they are looking to “calm the waters.”

But the despair, anger and fear abroad in the land is an indication things really  need to change. These are the societal analogy to the pain your body feels. Someone who cannot feel pain is in danger of burning or injuring themselves, so maybe the incivility in public discourse could have a useful outcome. As we sat in the workshop’s meeting room, someone killed three and wounded more than a dozen at the Gilroy Garlic Festival, for just one of many examples.

How far right has political respectability (the “Overton Window”) moved? The Obama administration’s policies were to the right of Richard Nixon’s, and Obama was condemned as a Kenyan Socialist…moving the Overton Window even further rightward.

So..could this Better Angels workshop be an attempt to consolidate the gains of the political right, enshrining the creditor class in a less dangerous environment? It looks that way to me. Right-wing billionaires have spent their lobbying millions discrediting government and any collective action, fostering an atmosphere of incivility and distrust. Now they want to spend a few dollars to repair the damage they continue to do. Is it too little, too late? Hard to say. It’s at least self-contradictory.

As a measure of team red’s effectiveness, even team blue was at the mercy of the right’s narrative. One non-participant observer told me he thought Bernie Sanders was a demagogue, demonizing Wall Street with his campaign. “The economy needs Wall Street! My 401K needs Wall Street!” he said.

I said I understood his fear, and thanked him for the frank conversation, reminding him as gently as I could that Clinton’s deregulation of Wall Street and Obama’s supine lack of prosecutions of its frauds cost his 401K significant money in 2007-8, perhaps more than a strike by capital that might occur if someone like Bernie runs public policy. He was unconvinced, … I was sincere in my appreciation, though, and perhaps that was one of the benefits of the workshop, dialing down the argumentative streak that often enough gets me in hot water.

So… Better Angels workshops’ stated goal is to reduce bitter, uncivil partisanship. Will civility cure what ails us? Or will it anesthetize the legitimate pain of a country where 40% of the population has to sell something or borrow money to deal with a $400 emergency? Is calling Better Angels a way to suppress dangerous dissent simply too cynical? Would I recommend attending such a workshop? Your call.