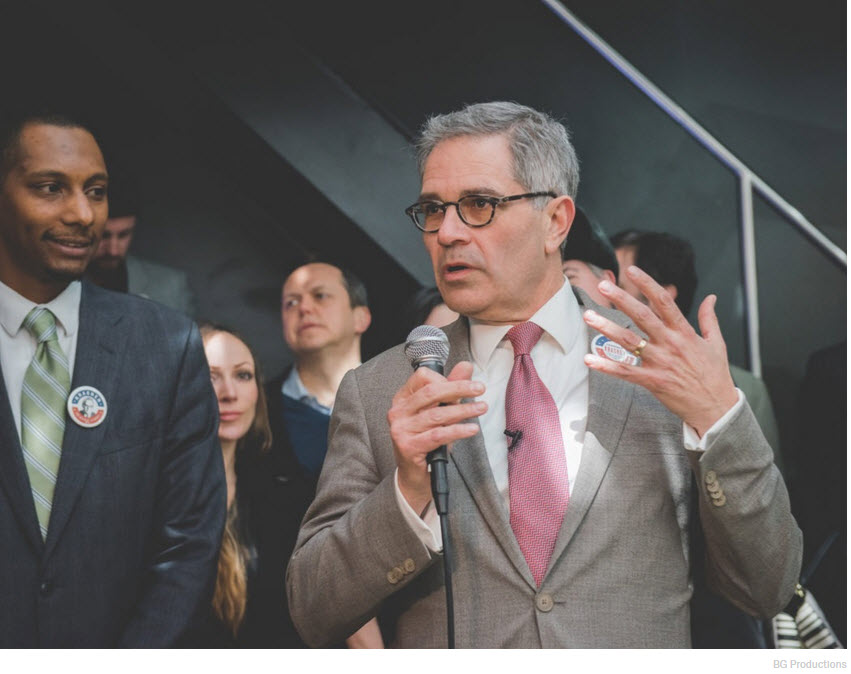 At 4:30 p.m. on Wednesday, while attempting to serve a warrant, Philadelphia police found themselves under fire. Six of them were shot, and although none were seriously injured, the alleged gunman, later identified as Maurice Hill, refused to leave the house. The standoff dragged on. After several hours, when Hill was surrounded by hundreds of police and SWAT teams, he made a phone call. He called his former lawyer, a longtime player in the Philadelphia criminal legal scene, Shaka Johnson. Johnson had been a police officer, a prosecutor, and is now a defense attorney. Johnson in turn knew who to call: Larry Krasner, another longtime player who transitioned from defender to progressive prosecutor.

A gunman in a tense standoff “had gotten a direct line to the city’s top prosecutor,” reports Ryan Briggs for WHYY. Johnson and Krasner listened to Hill, who was, apparently, ready to talk. He was terrified, reasonably, that if he came out, he would immediately be killed, and at the very least would have to go back to prison. “Hill, at that time, in my opinion, was in a very animated, excited, frankly, dangerous state,” recalls Krasner. But he wasn’t acting on it. He was talking and listening. Krasner and Johnson tried to calm him down, but they decided that including a representative from the police would be more effective.

Soon, the attorneys had Philadelphia Police Commissioner Richard Ross on the phone. The details of the call have not been revealed, although Ross said that they were “trying to appeal to him about why he even had a reason to live … talking about his daughter,” who at the time was two days old. Soon, Krasner was headed toward the scene, and, as they continued their call, Hill left the house, ending a seven and a half hour standoff. A potentially disastrous encounter had ended with no fatalities. Hill was treated for exposure to tear gas, which police had used to coax him out of the house, and was released into police custody. The officers who had been shot all left the hospital and were able to return home. Ross attributes the standoff’s end to the tear gas. Krasner credits “brilliant police work” and a “miracle.”

Using some pretty extreme logical gymnastics, the U.S. attorney for the Eastern District of Pennsylvania blames the entire incident on Krasner. “The crisis was precipitated by a stunning disrespect for law enforcement. … Only by the grace of God did [the police officers] survive,” the U.S. attorney, William McSwain, wrote in a statement. “Where does such disrespect come from? There is a new culture of disrespect for law enforcement in this City that is

promoted and championed by District Attorney Larry Krasner—and I am fed up with it.”

The claim was supported by no evidence: “It started with chants at the DA’s victory party—chants of ‘F*** the police’ and ‘No good cops in a racist system.’ We’ve now endured over a year and a half of the worst kinds of slander against law enforcement,” McSwain wrote. “This vile rhetoric puts our police in danger. It disgraces the Office of the District Attorney. And it harms the good people in the City of Philadelphia and rewards the wicked.”

It might seem shocking to read words like these on DOJ letterhead, except when you consider Attorney General William Barr’s baseless diatribe against progressive law enforcement from this week. McSwain is a Trump appointee who took office last year, but he worked as an assistant U.S. attorney in the same office under George W. Bush.

McSwain’s critique went beyond culture. “Maurice Hill is a previously convicted felon with a long rap sheet,” he wrote. “We have plenty of criminal laws in this City—but what we don’t have is robust enforcement by the District Attorney. Instead, among other things, we have diversionary programs for gun offenses, the routine downgrading of charges for violent crime, and entire sections of the criminal code that are ignored.”

Hill indeed has a criminal record. Since he turned 18 in 2001, Hill has been arrested at least a dozen times on charges related to guns, drugs, and assault. Krasner has only been in office since last year, which makes it a stretch to blame 18 years of arrests on a man who has been in law enforcement for 18 months. Krasner has had little, if anything, to do with Hill’s treatment in the system. Ironically, in 2010, it was the U.S. attorney’s office, not Krasner or his office, that offered to ask the judge in Hill’s case for leniency in exchange for Hill’s cooperation. What kind of charges was Hill facing at the time? Firearms charges, the very kind of charge that McSwain says Krasner doesn’t adequately enforce. There is nothing unusual about a federal prosecutor offering reduced time to coax a person to cooperate. But if there were a record that Krasner had made some such offer to Hill, McSwain most likely would be calling for Krasner’s resignation. (McSwain was not working at the office at the time that leniency was offered.)

Krasner told WHYY that his office has actually declined to prosecute fewer gun cases than his two predecessors did. His predecessor chose not to pursue 3 percent of gun arrests, while his team declined 2 percent. “When the case is not serious, there are cases we will decline [to prosecute],” he said. He cites refusals to prosecute marijuana possession, but adds that when it comes to “one of the areas where we really bore down … we are prosecuting more than the prior administration.”

Krasner’s office “eliminated the use of bail for many low-level charges, including DUIs, drug possession, and theft, which led to a 23 percent increase in people being released without posting bail,” according to The Appeal, but advocates are not entirely satisfied. “When Krasner was asked in December why, according to the Pennsylvania ACLU, over 40 percent of defendants are still held on cash bail, he responded that he didn’t want ‘people who are shooting people,’ ‘people charged with sex offenses,’ ‘people who are arrested with a firearm and they have a prior felony,’ and ‘high-level white-collar criminals’ to be able to get out of jail without having to pay bail.”

But the most pressing challenge of the moment, for everyone, is not to fall into McSwain’s trap of competing over who was less lenient and more incarceratory. Evidence shows that ever-longer sentences simply don’t make us safer, but they do destroy families and communities. Logic tells us not to draw any conclusions from rare, outlier cases like Hill’s. And history tells us that mending relations between law enforcement and communities makes everyone safer. The conference call between Hill, his attorney, Krasner, and the police commissioner, after which there was no more violence, stands in stark contrast to another standoff between Philadelphia police and residents that ended differently.

Nearly 35 years ago, an escalating pattern of animosity between a Black liberation group and the police came to a head when police unloaded more than 10,000 rounds into a rowhouse where the group was set up. Those inside returned fire. Eventually, police dropped “four pounds of C-4 explosives on the roof of the rowhouse without warning,” according to the Washington Post. It sparked “a blaze that quickly burned out of control and eventually leveled 61 nearby homes.” The bomb killed 11 people, including five children, and only one woman and a young boy emerged alive.

Krasner’s approach to police-community relations explicitly seeks to avoid this kind of escalation. When asked about McSwain’s statement, he said, “I’m surprised that William McSwain would seek to detract from great collaborative work of law enforcement last night … for his own political agenda and personal gain,” he said. “I will not be part of a distraction.”

One thought on “Larry Krasner Helped to Defuse an Armed Standoff. Now a Trump Appointee Is Saying Krasner Caused It.”