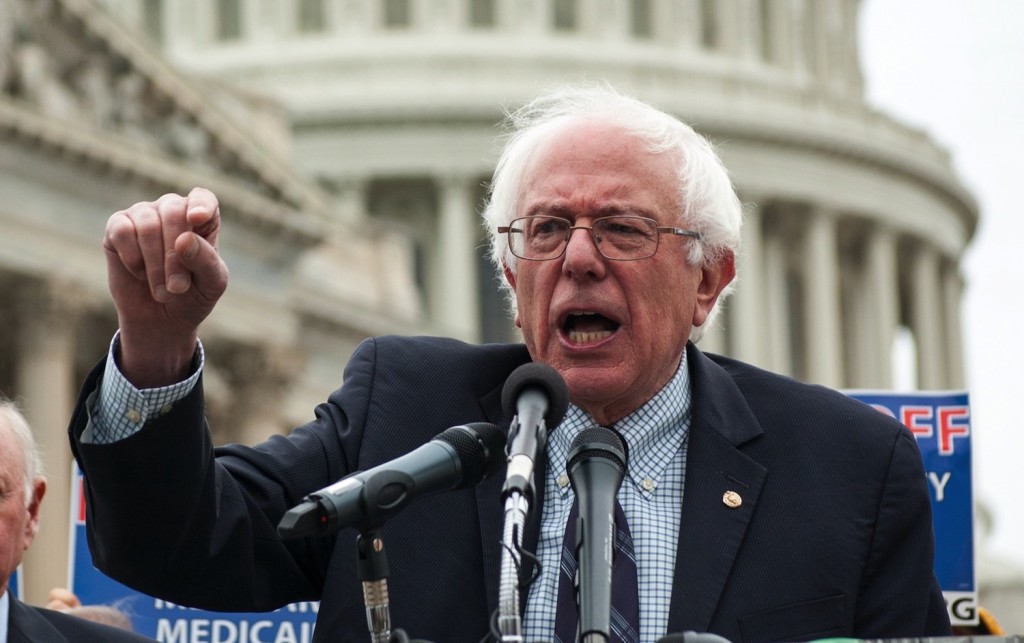 “Due to the historical legacy of institutional racism in this country, mass incarceration disproportionately falls on the shoulders of black and brown people in America,” Mr. Sanders writes in his 6000 word plan.  “In fact, black Americans are incarcerated at five times the rate of white Americans, and even though people use drugs like marijuana at roughly the same rates across all races.

“When Bernie is president, we will finally make the deep and structural investments to rebuild the communities that mass incarceration continues to decimate,” he writes.  “We must move away from an overly-punitive approach to public safety and start focusing on how to safeguard our communities, prevent the conditions that lead to arrests, and rehabilitate people who have made mistakes.”

Bernie Sanders offers a lot in the way of specifics.

He calls for ending “profiteering in our criminal justice system” by ending the private prison industry.

“We must end the practice of corporations profiting off the suffering of incarcerated people and their families,” he writes.  “No one should be able to profit from filling our jails and prisons. As has been reported, private prisons also act on their profit incentive by advocating for longer sentences for people convicted of a crime.”

Another big part of his call: making prison phone calls and other communications free, ending the reliance on fines and fees for revenue, and removing the profit motive from the re-entry and diversion system.

Bernie Sanders calls for an end to cash bail.

“Right now, hundreds of thousands of people without a criminal conviction are in jail simply because they could not afford bail. Young people can spend hundreds of days in jail, only to be acquitted — yet the severe damage to their lives cannot be undone,” he writes.

He has introduced “the No Money Bail Act of 2018 to end cash bail and to end the criminalization of poverty in America.”

“The people who serve our country as police officers deserve our gratitude and respect. As a country, though, we are asking them to do far too much. As human beings, we all share common vulnerabilities,

and we all share basic needs to live a stable and dignified life,” he writes.

At the same time, he says, “we must hold our police and sheriff’s departments to a higher standard. And we must end harmful policing practices like racial profiling, stop and frisk, oppressive ‘broken windows’ policing, and the militarization of police forces.”

He adds, “Widespread use of excessive force, including deadly shootings of unarmed civilians, undermine the integrity of and public trust in the police. Violence and brutality of any kind, particularly at the hands of the police meant to protect and serve our communities, must not be tolerated.”

In a thorough policy roll out, he calls for ensuring law enforcement accountability and robust oversight.

He hits on a wide range of policy areas: rescinding AG Sessions’ guidance on consent decreases and revitalizing their use, ensuring accountability and independent oversight.

He also calls for the end of federal programs to provide military equipment to local police forces.

Bernie Sanders wants a US AG investigation whenever someone is killed in police custody and he calls for banning the use of facial recognition software.

Moving back into criminal justice reform, Bernie Sanders calls the criminal justice system “rigged.”  He notes, “The size of your bank account too often determines the quality of representation that a person will receive. If you cannot afford to pay fines and fees associated with criminal justice involvement, you can end up in a spiraling cycle of debt, with a suspended driver’s license, or even locked up in a modern debtor’s prison. We need a system that works equally well for the workers and the wealthy.”

Bernie Sanders goes back to the Gideon decision from 1963 to talk about the right to counsel.

He noted that “today 90 to 95 percent of criminal cases are decided by a plea deal, too often without the defendant playing an active role.”

He writes, “Across the United States, more than 80 percent of felony defendants cannot afford a privately retained lawyer and have to rely on state-administered public defenders or court-appointed counsel. Yet in states across the country, public defenders have far too many clients and too few resources to offer adequate representation.”

Mr. Sanders adds, “Despite the often heroic efforts of public defenders and other appointed counsel, the workload makes it impossible to provide the quality of representation that each defendant deserves.”

He added, “America must not be a country where only the rich enjoy the protections of the Fifth Amendment. We must not have a court system that offers “the best justice money can buy.” We must guarantee all Americans their Sixth Amendment rights.”

Bernie Sanders calls for tripling national spending on indigent defense, to $14 billion annually.  He also called for a review of salaries and workload and wants to set a minimum starting salary for all public defenders.

On the prosecutorial side, he wants to “rescind former Attorney General Jeff Sessions’ orders on prosecutorial discretion and low-level offenses.”  He also wants to limit “absolute immunity” for prosecutors, which is used to shield wrongdoers from liability.

On mass incarceration, he noted that “the United States imprisons people at a higher rate than any other nation, in no small part due to extremely harsh sentencing policies and the War on Drugs. But mass incarceration has not made us any safer or reduced drug use and addiction.”

He added, “Capital punishment has failed to reduce violent crime and is disproportionately apportioned to the poor and black and brown people. It has also cost innocent lives.”

Bernie Sanders is calling for the abolition of the death penalty, stopping excessive sentencing, ending mandatory sentencing minimums, the end of three strikes and much more.