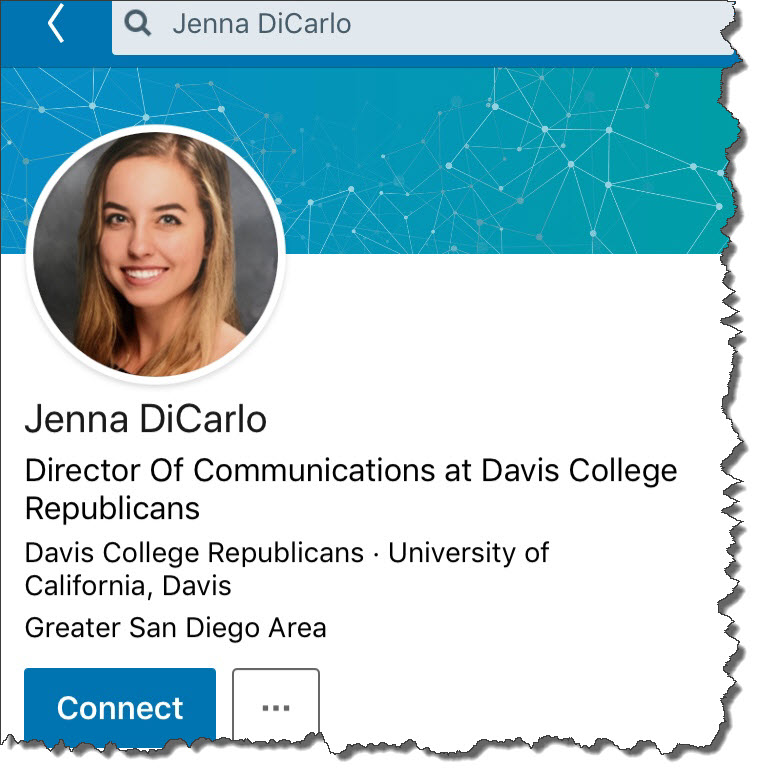 Having run through the math a few weeks ago, I am largely supportive of moving to district elections.  But I have to say I am a bit troubled that the California Voting Rights Act is written in such a way that people without real standing to challenge the civil rights implications of our local elections are still able to initiate the suit.

I am further troubled by a letter in the Enterprise by an individual named Jenna DiCarlo.  Read her letter and you would not imagine that she is the Communications Director of the Davis College Republicans, in charge of pro-Trump messaging as well as promoting the recent visit with Dinesh D’Souza.

And yet here we have her letter: “When the City of Davis received notice that they have been holding illegal elections that disenfranchise voters of color, I had hoped that the legal threat would be the encouragement the city required to make needed reforms. Unfortunately, their reaction was thoroughly disappointing.”

Illegal elections?  No.  There is a legal process by which the city has to react to such a letter in order to go to district elections.

But really, when has the Republican party worried about things that would “disenfranchise voters of color”?  If she were the communications director of the Davis College Democrats, maybe.  But there is something weird going on here.

She continues: “Instead of doing what they could to rectify their mistakes and give representation to all communities of color, the city of Davis is claiming “they do not have time” to fix the problem “in

The problem is that the deadline passed for the city to change the election for March 2020.

She argues, “In essence, it is not convenient for them.”

The law does have timelines built into.  However, it is also worth noting that the council has yet to make a decision.  They have not voted to take any course of action.  Ms. DiCarlo is simply responding to the city manager’s communication based on their legal advice.

Wow, her concern is the civil rights of our community?  Again, I am having a hard time believing that someone who is ostensibly pro-Trump and just worked to promote Dinesh D’Souza coming to speak is going to have that as a concern.  But perhaps we are pre-judging her and she is really opposed to the politics of Trump and the marginalization of people of color in the political process.

I actually agree with Ms. DiCarlo that the city should move the election to November.  There is higher turnout of people of color.  The other communities in this county have done so as well.

I very much disagree with her tone, however.  The city is faced with a new situation, there is a process to deal with it, the council has yet to take public comments, it has yet to have a public discussion and, most importantly, it has yet to make a decision.

She writes: “Why use the lowest participation levels to elect our city officials? Apparently, because it is convenient.”

She continues: “It is unacceptable for the city to pass a resolution adopting district elections, only to turn around and wait another three years to make the change.”

As I understand it, that is not off the table and may happen, but there are some legalities and moving parts that they have to deal with.

She writes: “Doing so would put the city in questionable legal standing, as they are knowingly and admittedly suppressing minority voters in another election because it is not convenient.”

As I understand it, they are permitted to do so under the law.  The law has a deadline for changing to district elections and the letter writer/would-be litigant missed that deadline.  Did they do it on purpose to attempt to force the election to November?  That seems possible.

She concludes: “That is not my Davis. My Davis is a loving community that defends those of all races, learns from the voices who have for too long been silenced, and empowers every resident of our city.  Let’s live up to the values of our community.”

And yet these seem to be words of a liberal activist, not the Republican Communications Director of the college Republicans.

So I think we deserve to know what is really happening here.  Is Ms. DiCarlo an agent of Matt Rexroad, an attorney and Republican campaign consultant?  And who is Mr. Rexroad really representing?

What is the game here?

I understand the law and what the city must do under the law.  I don’t like the idea that the system here is being gamed.  Something smells, starting with this letter.  I think we need some answers.

Share:
Tags:Civil RightsDistrict Elections
Previous : My View: Why Would the Council Not Even Consider a Sales Tax Increase?
Next : Why I Ride: A Conversation With Jessica Jacobson

75 thoughts on “My View: Some Disingenuous Arguments Floated in District Election Discussion”