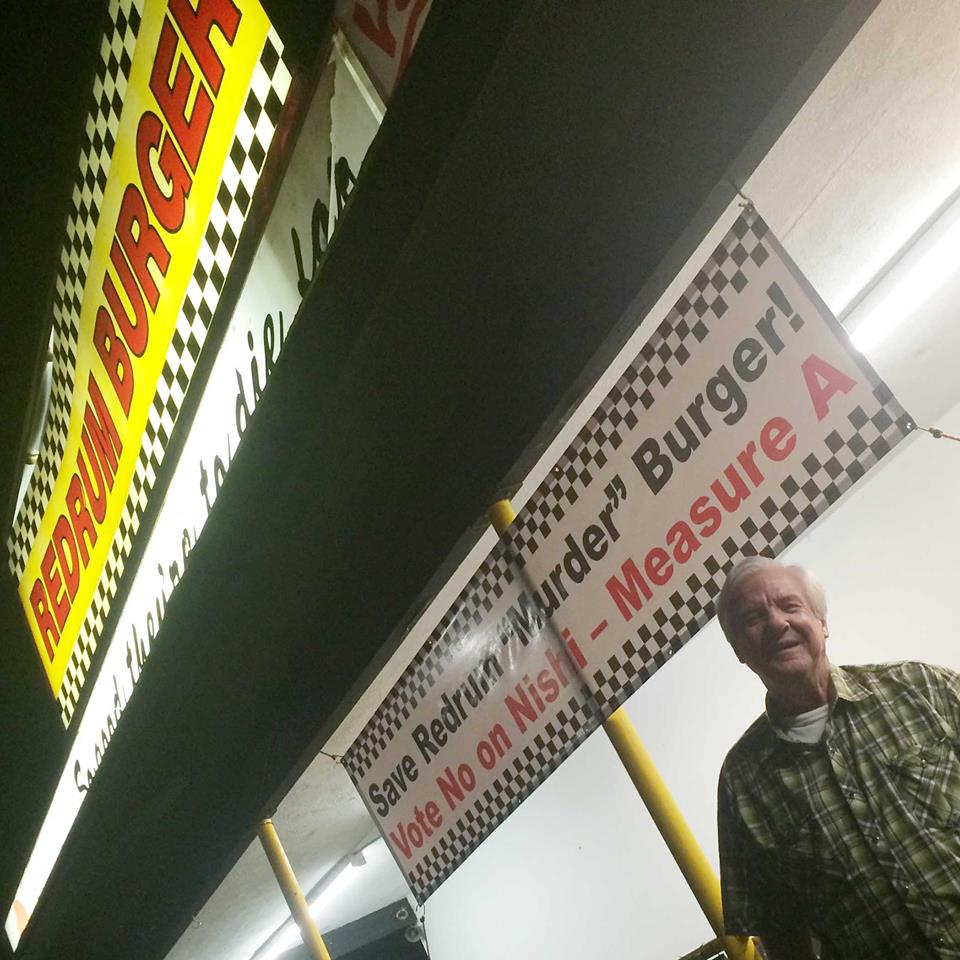 In a Facebook post, the owner of Redrum Burger says the restaurant is closing on Sunday,  He did not give a reason, but owner Jim Edlund thanked devotees of the restaurant for 33 years of business.

The post from Saturday reads: “Redrum Burger formerly known as Murder Burger will be closing at our Davis location at 978 Olive Drive as of Sunday, August 4th as of 10 pm. We have had a great run at this location but like they say ‘All good things come to an end.’”

What makes this interesting is Mr. Edlund and Murder Burger became a campaign issue in the 2016 Nishi vote which would have re-worked West Olive Drive.

Following the defeat of Measure A, Mr. Edlund posted on Facebook: “Measure A was defeated by almost 700 votes in the last and final recount.  Nishi is now dead and buried for now.”

During the campaign, they said that the passage of Measure A would force them to close if the voters passed it.

At the time Mr. Edlund said, “There have been a lot of rumors and misinformation circulating about this, some of which is being sent out directly by the Yes on Measure A campaign.”  However, he claimed, “Redrum Burger acknowledges recently receiving emails about potential new lease terms, but no formal lease proposal has been received.”

He wrote, “For 2+ years Redrum Burger has tried to find a way to work with the Nishi developers to avoid the loss of our restaurant. There have been discussions about the loss of the restaurant but the

Nishi developers have never made a formal lease proposal to Redrum Burger.”

Even at the time, there was some dispute as to what the developers were offering.

The campaign told the Vanguard, “In these final hours before the June election, there is misinformation being floated around regarding Redrum Burger.  To be clear, the Nishi Gateway has on multiple occasions offered Redrum Burger a space at the Nishi Gateway as the property’s first tenant and at Redrum’s current rent. Redrum Burger was first approached in 2011 about the long term trajectory of the Nishi project. This is an indisputable fact. Nishi would love to house the famous ostrich burger for decades to come.”

According to them, “The Nishi Gateway offered Redrum a long term lease at its current rent. Redrum has rejected these fair terms and hasn’t even proposed an alternative. This information is not reaching Redrum’s customers, because Redrum is actively deleting comments and blocking people that correct the record.”

The campaign stated, “This public misinformation campaign is disappointing and confusing. If Yes on Measure A passes, Redrum can have a few thousand potential new customers, a modern facility, and safer bike access for its South Davis customers, at the same rent it currently pays. It’s just not true to say Measure A forces Redrum to shut down.”

They continued, “It was not our decision to make these negotiations public, but there is a major social media offensive underway to convince people who would otherwise support our campaign to vote ‘no’ based on a false premise. We have no choice but to correct the record.”

Did Redrum Burger lead to the loss of Measure A?  That’s an interesting question.  We believe that the biggest factors were traffic impacts on Richards as well as the lack of affordable housing.  But, in a close race, the impact of the potential loss of the “iconic” hamburger joint probably factored in with those concerned about traffic and overall impacts.

There were also some accusations that Redrum was overplaying their hand at the time.

Kemble Pope told the Vanguard, “In my humble opinion, this one is a red herring. Redrum will certainly be affected, but they’ve turned down all offers of help. I’ve gathered a bunch of information from a few sources, shared it on their FB page, and Redrum has not disputed any of the following.”

From a source at the Yes on A campaign, “If Redrum closes its doors after Measure A passes, it is their own choice. They are not in any way being forced to close. Quite the opposite. It will likely be 2 years until any construction begins. But, their building is old and in disrepair, and they have a chance to upgrade their location at the same rent. They shouldn’t pass up the opportunity. The property owner has been in discussions with Redrum for over three years!”

From the property owner to the owner of Redrum Burger: “Jim, I’d like to offer you space in one of our buildings at the Nishi site for the same rent and equal space that you have now. A new facility for you on the Nishi property. Dan, my project manager is copied herein.”

So here we are, three years later, and Redrum is closing anyway.  They have every right to do that, but after they turned their store into a campaign issue in 2016 and then promised to be open until 2025, it does seem a little contrived.

The truth is probably that they were close to the end of their working career, and Nishi might have been the straw to break the camel’s back.  As it turns out, the camel was probably close to retiring regardless, and now they were able to do so on their own time.

Nishi was passed last year as a student-housing-only project.  Would it have been better with R&D space and access to Olive Drive?  Some people think so.  The voters did not.

7 thoughts on “Sunday Commentary: Wait, So Redrum Is Closing Anyway?”