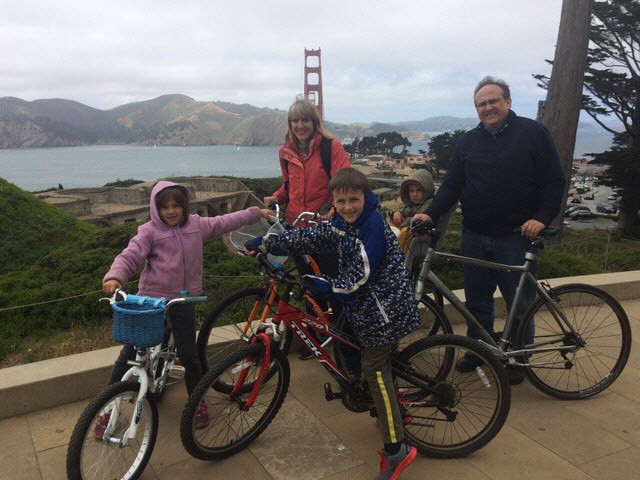 Jessica Jacobson is a newcomer to Davis, but not a newcomer to bike riding. As a kid growing up in the Midwest, Jessica first started riding a bike as a means of transportation to get to and from school. But it wasn’t always a pleasant experience.

“We were forced to ride because our parents weren’t able to shuttle us around. It was sort of ‘uncool’ to ride my bike when other teenagers were driving cars to school. Plus, it was cold outside!”

Other than a short stint with a used car in high school, Jessica didn’t own a car until her 30s. She lived in many cities and used public transportation to get around, as well as a bicycle. Now that she has relocated to Davis, after living in many locations in the US and overseas, most recently New Jersey, she is grateful for the warmer weather, and the Davis bike culture and infrastructure.

“As an adult, I get a lot of joy out of bike riding. I ride primarily for health and environmental reasons. Cycling is a low-impact means of transportation. Our family has made a conscious lifestyle choice that helps us get exercise and helps the environment.”

Jessica and her husband have three children, ages 5, 8 and 11. The older kids ride their bikes to school on a daily basis, barring any miserably hot weather. The 5-year-old is brought to school in a bike

trailer by an adult, a commute of approximately 30 minutes, which is quite the commitment. Jessica finds that the time is quite meditative for her 5-year-old, who arrives at school calm and ready to start the day. Jessica was inspired by a neighbor that has a cargo bike and takes her kids around regularly. Their sons were in the same preschool and the neighbor regularly took her son the 3+ miles there by bike.

The family includes an au pair, who rides a bike with the children. It was so important that their au pair ride a bike that Jessica and her husband made it a requirement for the position. They are a one-car family for 6 people and follow the unofficial family rule, which is that riding a bike as transportation is the default. 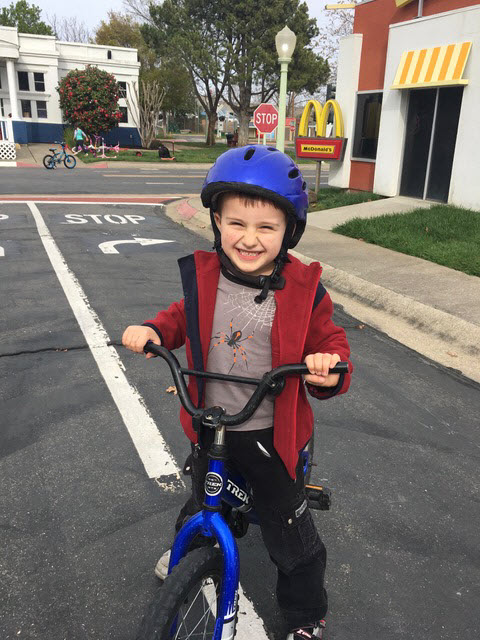 “If the trip is under 2 miles, we ride. If the weather isn’t extreme, we ride. If we aren’t carrying anything too large, we ride. The car is the back up, not the other way around.”

Jessica has lived and traveled in other parts of the world, and enjoys studying and participating in bicycle culture. She loves the safety and expanded bike lanes of Europe, and sees them as something for US cities to strive towards. She appreciates the advanced Davis bike culture, but also respects that the city is constantly looking at ways to improve and not resting on its laurels.

When Jessica lived in Central Asia, she was one of the only people on a bicycle commuting to work, creating some local interest. It was especially rare for a woman to ride her bike to work on a daily basis. She hopes that seeing her cycling was helpful in some ways to other women that lived there. Recently, she was in Seattle and took the opportunity to ride a Jump bike, something she doesn’t do here in Davis even though Jump bikes are readily available around town as the family has a bicycle for each member, including one for guests.

“I love how being on a bike brings you closer to the neighborhood. You can stop and see things more closely, listen to the sounds, and talk to people along the way. You can’t have that same sensory experience in a car.”

Jessica may be a newcomer to Davis, but she certainly fits in well with the bike culture here. She is currently a member of the Bicycling, Transport and Street Safety Commission. Sounds like she found the perfect match for her and her cycling-loving family. Cycling to school in the Midwest many years ago may not have been considered cool. But here in Davis in 2019, she gets to be one of the “cool kids” riding to school on a daily basis.

This article is written by Lisa Montanaro, commissioned by The Bike Campaign. For more information about how to “Drive Less. Ride More.,” contact Maria Contreras Tebbutt at funmaria@sbcglobal.net or www.TheBikeCampaign.com

Share:
Tags:BicyclingThe Bike CampaignTransportation
Previous : My View: Some Disingenuous Arguments Floated in District Election Discussion
Next : Sunday Commentary: What Are We Going to Do about Right Wing, Domestic Terrorism Manifesting as Gun Violence?