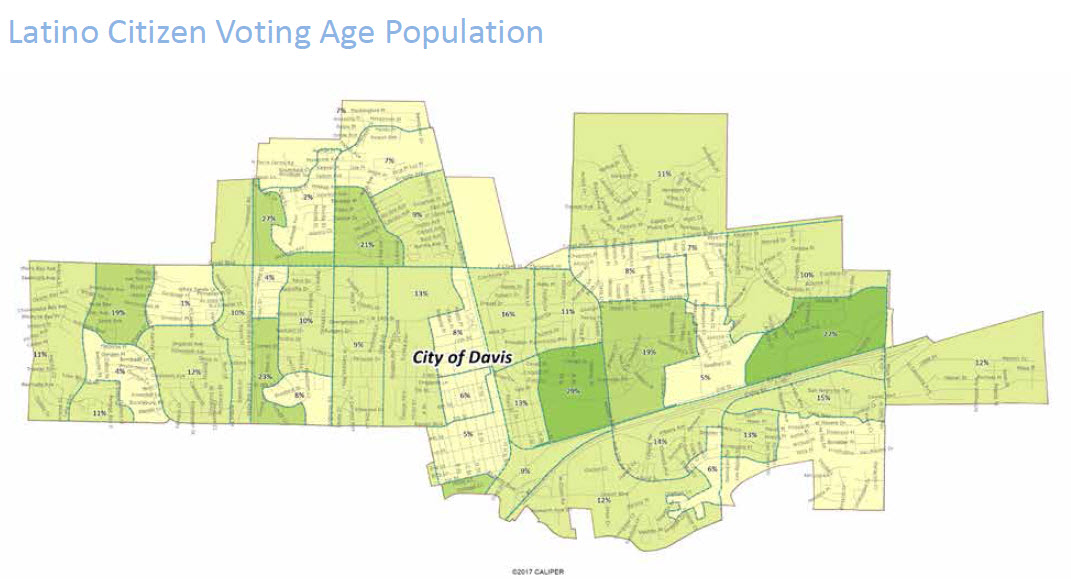 We learned a lot from the initial discussion on district elections and the very impressive presentation by Paul Mitchell.  The biggest take-home message is that there may be a majority of council members that are willing to go to seven districts.

Here are some early thoughts after watching the discussion.

First, a note of correction, the “neighborhoods and streets” view is not a potential drawing up of districts.  Instead it was an effort by Mr. Mitchell to show where various population levels lie.  There will not be a 1000-person district.

In fact, Mr. Mitchell was very clear that for a five district configuration, the median population was 13,124 and the real numbers cannot exceed 10 percent deviation from that average (a high of 14,436 and a low of 11,812), and he said functionally they should make the deviation as narrow as possible.

He stated, “We have enough technical ability to draw districts that are extremely well-balanced.”

If we go to seven districts, that number would be 9374 and would vary plus or minus about 937 people.

Bottom line, there will be some variation, especially since these will be based on 2010 numbers at least for one term, but the variation will be within about 10 percentage points.

Second, there is really no appetite to go to an at-large mayor system.    Several members of the council cited legalities without elaboration.  In the city attorney’s notes, they only suggested that there could be a legal issue.

From my perspective, I probably would have preferred to look into a direct voting system for the mayor.  But it is really not the most important issue to me.

Third, one point of disagreement with Paul Mitchell and some on the council is the notion of being elected to a district but serving the whole city.

Mr. Mitchell said that districts should be thought of as something “on election day” rather than “something that impacts every single decision and how you work.

“It does not determine how you govern,” he said.  “The city can still work to achieve goals that benefit the city as a whole rather than the interests of any single district.”

“What we’re creating today exists, in reality, every couple of years,” he added.  “In functional governance reality, these districts only exist for that one day.  Then you make decisions for the entire city.”

That sounds good and it perhaps holds on day one.  When that starts going out the window is the first time you have an issue like Hyatt House, Sterling or Trackside – an issue where the near neighbors believe they are impacted and the elected councilmember has to represent the issues of the people who vote on their election, and cannot necessarily take the needs of the community over the needs of their constituents.

This might not be true for day one – but over time, we will see districts starting to shape our policies.

Point four, I was heartened to hear that the city council is at least amenable to seven districts and there might even be a majority for them.

Most outspoken for seven was Lucas Frerichs: “I am interested in the possibility of seven (districts).  It lowers the barriers to entry.  There’s ideally greater representation when you have more representatives – smaller numbers of residents (per district).”

Against it was Dan Carson: “I’m open to my colleagues getting whatever maps they want.  I do think that five makes more sense from a governance standpoint.”

I think that Lucas Frerichs is spot on here.  If you consider the purpose for going to district elections – at least under CVRA (California Voting Rights Act) – is to address the needs of protected populations and address racially polarized voting, you do that best in Davis by going to smaller districts.

First, as Councilmember Frerichs stated, it lowers the barriers to entry.  Second, it allows district to be more finely shaped and divided so that communities of interest – racial and ethnic minorities, renters, low SES, and students – are more likely to be able to have representation on council.

That doesn’t mean that people cannot be effectively represented by people who do not share those characteristics, but rather it operates from the assumption that greater diversity is an advantage and allows governing decisions to be considered from a host of different points of view.

We cannot directly draw districts based on race and ethnicity.

As Paul Mitchell aptly explained, “[W]hile race and ethnicity and these protected classes are used as a way to observe the redistricting, we cannot draw districts solely with that criteria in mind.”

Dan Carson clearly disagreed with the notion of looking at race, as he quoted from former Justice Sandra Day O’Connor.

He said that “reapportionment legislation that cannot be understood as anything other than an effort to classify and separate voters by race, injures voters in other ways.  It reinforces racial stereotypes and threatens to undermine our system of representative democracy by signaling to elected officials that they represent a particular racial group rather than a constituency as a whole.”

But I agree that it is a balancing act and, clearly, we should look at communities of interest which can include “racial and ethnic groups.”

As pointed out by a commenter, the decision cited by Councilmember Carson was kind of the reverse of the situation in Davis.  The North Carolina gerrymandering system used race as a way to isolate black voters into majority-minority districts to give more districts to white conservative majorities.  In Davis, we would be looking at systems to empower people of color, not dis-empower them.

In the end, I think with seven districts we can accomplish a lot of what we want without going crazy with the maps.