Despite a small but spirited opposition to the acquisition of the Armored Rescue Vehicle (ARV), the council was unanimous in its support for the acquisition, scaled down to $118,000 for the vehicle that the police believe will protect them in a number of scenarios ranging from the mundane high-risk warrant to the active shooter situation.

“I believe we can keep a balance between keeping our police safe and keeping our citizens safe,” Mayor Pro Tem Gloria Partida said.  “I think that times have changed, there’s a lot more active shooter situations – it’s not just the police department that’s in more danger, it’s people.”

The council was unanimous in its support for the acquisition of the vehicle – however, the major discussion was over the use policy.  Mayor Brett Lee suggested that the police chief and auditor come up with a policy, and provide suggestions for changes and alternatives.

Councilmember Lucas Frerichs suggested that the Police Advisory Committee look at the policy and review it.  There was concern that this process could take a while, but Chief Pytel pointed out that

it would likely take months to purchase the vehicle.

Chief Pytel in his presentation pointed out that in 2014-15, when the city attempted the acquisition of the MRAP (Mine-Resistant Ambush Protected vehicle), the concern was the military nature of the vehicle.  And even though there were consequences, that the need to protect police officers was acceptable, “Most of the conversation was around the type of vehicle.”

At the time of the discussion, the BearCats were the armored civilian vehicles that were available – but at that time, they were going for almost $400,000.  “The cost was pretty prohibitive at the time,” he said.  “Council said at the time, if things change, come back.

“There are new versions of armored vehicles, they look quite different and the cost came down considerably,” the chief said.

He compared the looks to the Amazon Prime delivery vehicle.

The proposed uses include rescue and extraction described as: “The removal of downed or injured officers or persons in a hazardous or hostile environment.”

And finally the transportation of equipment: “Delivery of equipment such as a throw phone, loud speaker, etc. into the inner perimeter of a tactical incident.”

Dillan Horton, the vice chair of the Police Accountability Commission, suggested it would have been a good idea for the PAC to have seen this issue prior to its coming to council.

“I want to push for a process ultimately that makes that routine,” he said.

Another commenter noted that, while Woodland has an armored vehicle, “to my knowledge it has never actually saved anyone.  Nor done anything significant.  I agree this is a questionable use of funds.”

He noted about one of the uses being to transport SWAT teams, and said, “That is not a defensive use.  SWAT teams are extremely offensive.”

Toby, a graduate student, pointed out, “Chief Pytel, you have made reference to a number of scenarios that are speculative at best.”  He said that the lone concrete example is irrelevant to this discussion – the death of Natalie Corona.

“You have made repeated reference to the new and improvedness of the vehicle in question and yet the only elements that you have pointed out is that it is smaller and more maneuverable.  Apparently it doesn’t look like a militarized vehicle,” he said.  “The problem with the militarized vehicle in the first place is not that it actually looks like one, but that it is one.”

He added, “While it is admittedly terrifying to see, in your own community, armored vehicles driving around, what is arguably more terrifying in a much broader sense is to witness the slow encroachment of militarized policing into your community – and to not to know what it leads to next.” 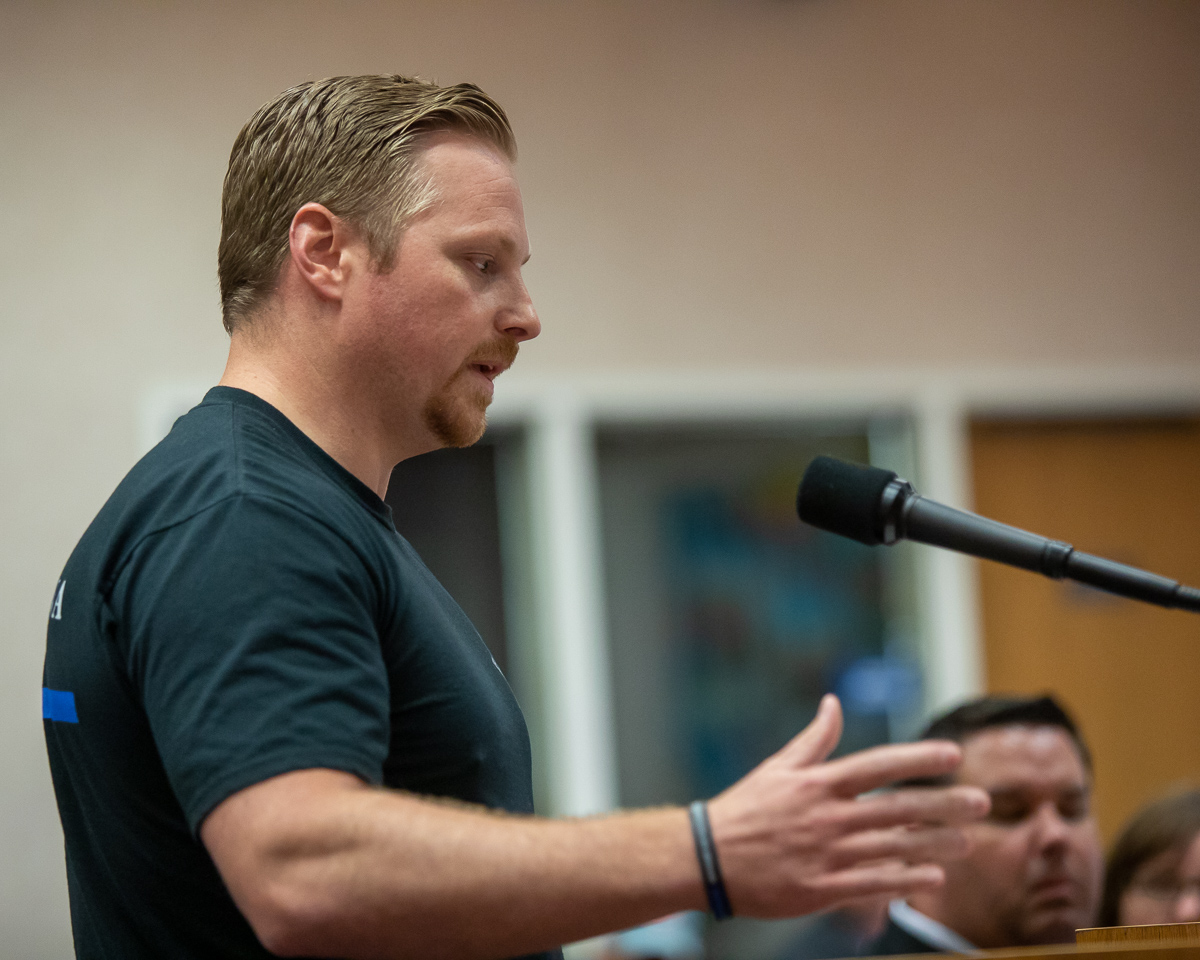 Davis Police Officer Sean Bellamy would respond to some of the comments.

He said, with regard to timing, “You definitely have to evaluate things when someone that you work with is killed for doing the job that you do.”

He referenced the shooting of Officer Sullivan in Sacramento and that they needed to use armor to get in there and save her or attempt to rescue her.

Dan Carson said he supports this proposal because he’s been to two memorial ceremonies for fallen police officers.  He noted, in the case of Natalie Corona, “If he hadn’t have been a lousy shot, it would have been another mass shooting that you hear about in the headlines, unfortunately every week now.”

He added, “We see headlines in Gilroy, El Paso and Dayton, Ohio.  There’s very scary things going on out there.” 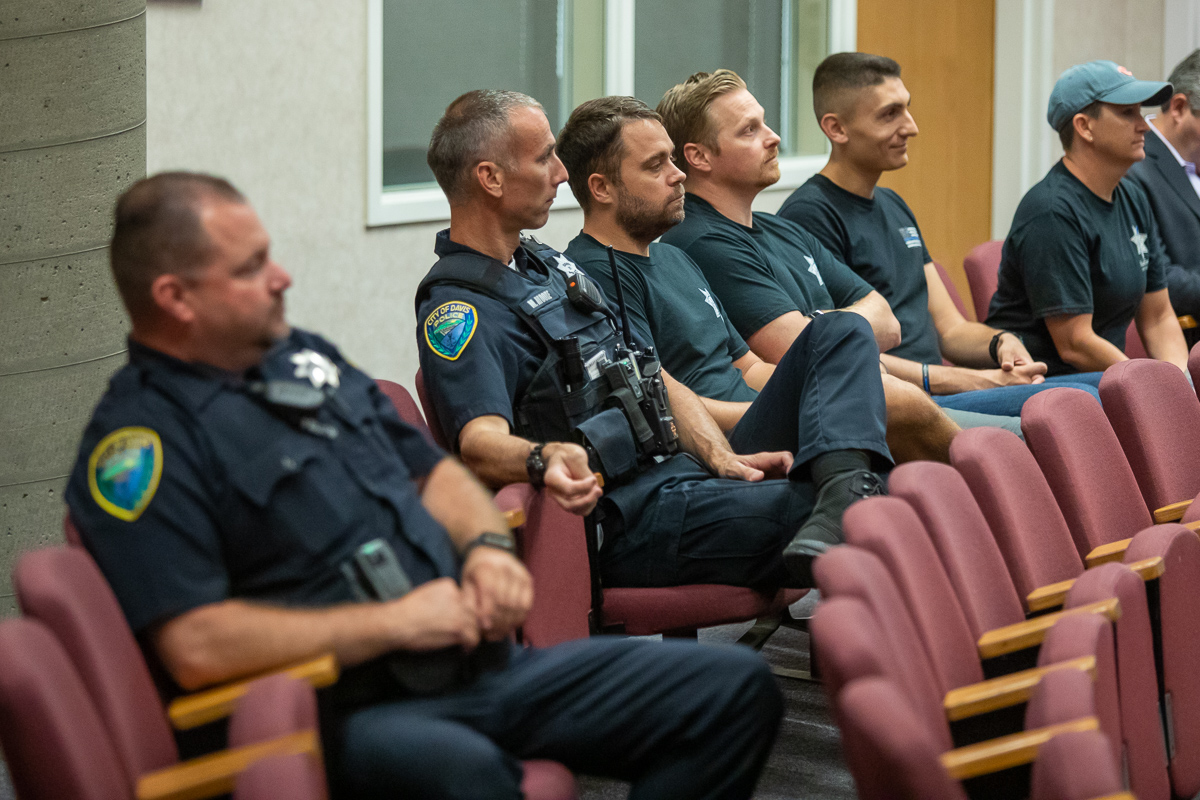 Councilmember Carson said, “If something bad happens – I hope it doesn’t – but if it does, we need to understand when and how a vehicle like this is supposed to be used.”  He added, “I was not a fan of the MRAP, I thought that was above and beyond what we needed.  I think this makes a great deal of sense.”

Councilmember Lucas Frerichs added, “This is decidedly not an MRAP.”  An MRAP, he said, “was decidedly a military vehicle.”  He said, “This is different for me personally…  I also see this as an insurance policy.”

Will Arnold added, “I reject the notion that we ought to enhance police accountability by limiting access to purely defensive materials, that strikes me as somewhat offensive.”

The council agreed unanimously to approve the acquisition of the vehicle and to work on a use policy that would limit its use.