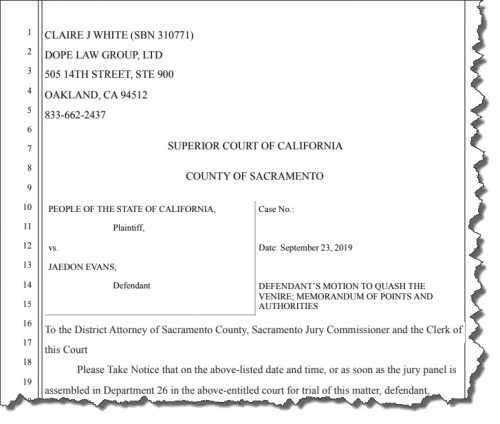 White, in a broad statistical analysis, said odds that Blacks are so under-represented in the jury pool are near-astronomical.

Because of White’s allegations, Judge Curtis Fiorini again delayed the jury selection portion of a trial of Jaedon Evans, the client of White, and Preston Bouie, represented by Tom Clinkenbeard, for armed robbery at a Sacramento Denny’s restaurant last May.

Before the jury pool challenge, the defendants were set for trial Sept. 10. Now, the parties aren’t due back in court until Sept. 30 to discuss White’s motion to dismiss the entire jury county venire/pool.

In her motion filed this week, White said she is moving to “quash” the entire jury venire/pool because “the jury is not drawn from a representative cross-section of the relevant community in violation of the defendant’s federal and state constitutional rights.”

White challenged the county juror selection last week when only two of 60 jurors in her client’s case were Black. Both defendants in the case are Black.

She said and “the jury selection procedure in Sacramento County has resulted in selection of jurors in a constitutionally impermissible manner; that the jury excludes jurors of a protected class in violation of the defendant’s federal and state constitutional rights.”

In a detailed analysis provided the court, White said “it’s a mathematical fact that there is a disparity between the relative amount of Black jurors in the venire and the relative population of Black people in the county.”

White maintains in her pleading that “statisticians in analyzing the limited data available to Mr. Evans, namely the presence of only 2 Black jurors out of 60 jurors” indicated that “if the venire is a fair cross section of the community, in this case a community with 10.9% Black population (as noted in the 2010 Sacramento County census), drawing only 2 Black jurors in a group of 60, would only happen 0.000027% of the time.”

“In other words, if there were 1000 jury trials in Sacramento county per year, we should only get a panel of 60 potential jurors with 2 potential Black jurors once every 3,600 years. Essentially, it’s a mathematical fact that there is a disparity between the relative amount of Black jurors in the venire (jury pool) and the relative population of Black people in the county,” White said in her pleading this week.
The Oakland-based attorney added that the “system used inevitably and definitively results in a disparity in the number of Black jurors relative to the Black population of the county,” and that the venire cannot be a fair cross section of the community. This disparity, or under representations of African-Americans citizens on the jury venires in Sacramento County is not fair or reasonable in relation to the numbers of such persons in the community.”

Sacramento County has admitted in response to a query by White that it does not keep any records regarding potential jurors selection.

“When any large and identifiable segment of the community is excluded from jury service, the effect is to remove from the jury room qualities of human nature and varieties of human experience, the range of which is unknown and perhaps unknowable. It is not necessary to assume that the excluded group will consistently vote as a class in order to conclude, as we do, that their exclusion deprives the jury of a perspective on human events that may have unsuspected importance in any case that may be presented.”

White then asked the court to dismiss the entire jury venire/pool, charging that “the Sacramento County Superior Court’s jury selection process as currently implemented results in a significant under representation of African Americans.

“The resulting disproportionate number of African Americans on defendant’s jury not only violates defendant’s constitutional right to a representative cross-section of our community on this jury but it also injures the entire community and reflects poorly on the judicial process throughout the county,” White said.

When White posed the challenge concerning the county jury pool initially, veteran defense lawyers said they couldn’t recall such a request – let alone one that was granted. One attorney said “it’s about time” the jury selection process in Sacramento was examined.

White – a University of California, Davis, law school alum – has a history in Sacramento of pulling of legal miracles. In her first jury trial several years ago, and despite her client admitting his guilty, she convinced a jury to not convict a former homeless veteran after he hit Sacramento Mayor Kevin Johnson with a pie as political theatre.