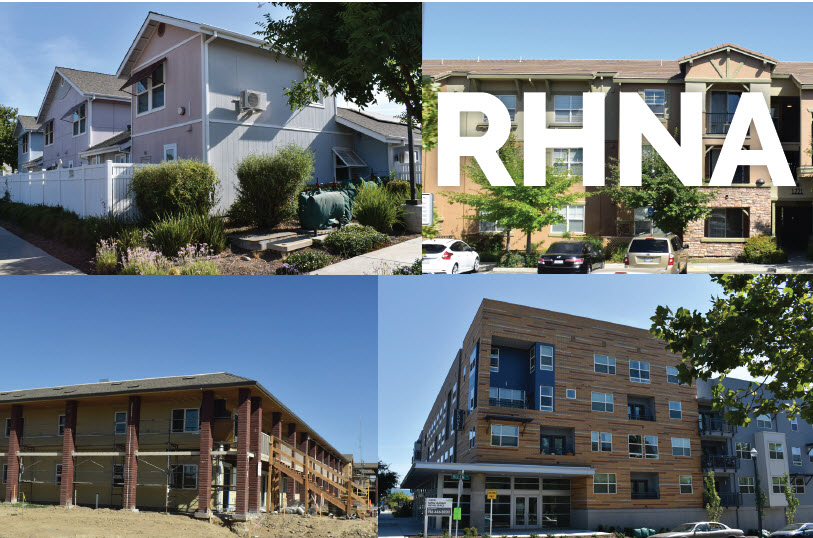 SACOG (Sacramento Area Council of Governments) has released a draft menu of Regional Housing Needs Allocation (RHNA) methodology options and, as expected, the City of Davis’ requirements are going up from the previous period.

According to Assistant City Manager Ashley Feeney, the city is in a public comment period that expires on November 8.  The city has secured Greg Chew from SACOG to present to council, right now scheduled for October 22.  At that time, the Planning Commission will be there for a joint meeting.

The recommended total RHNA for the city is 2075 units, with 930 of those units being in the lower-income RHNA category.

The RHNA is a state-required process that “that seeks to ensure cities and counties are planning for enough housing to accommodate all economic segments of the community.”

The process is split into three steps:

“The RHNA methodology will assign housing units to each jurisdiction in the SACOG region, broken down into four income categories: very low-, low-, moderate- and above moderate-income,” the release stated.

Importantly, the period begins in October 2021.  By August 2021, “the City of Davis must adopt a housing element that demonstrates, among other things, how we can accommodate the assigned RHNA numbers through zoning amongst various income categories.”

RHNA, as indicated above, breaks the housing units into four income categories: very low-, low-, moderate- and above moderate-income.

They note: “A key assumption of the RHNA requirements is that the higher the allowed density in the zoning, the more likely it is to be able to accommodate affordable housing.”

From January 2013 to October 2021, the Davis RHNA consisted of 1066 units – so the new requirement nearly doubles that. 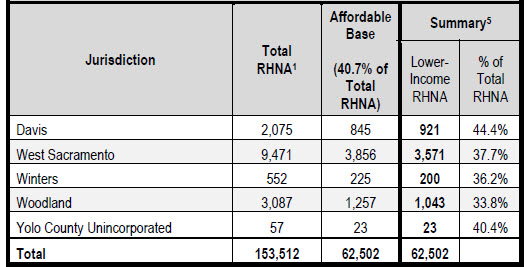 The requirements from RHNA mark a fairly large increase over the previous eight-year period from 2013 to 2021.  The overall regional units allocated from HCD were 104,970 and now are at 153,512, about a 50 percent increase.

The biggest hit will come to West Sacramento, however.  West Sacramento will be required to build over 9000 new housing units, up from 5600 over the previous period.

Woodland will also grow faster than Davis, with a required 3087 units.  Winters will add 552 units while Yolo County’s unincorporated areas will only be required to build 57 units.

The new RHNA numbers reflect the housing crisis and the need for additional housing production in the region.

We saw much of this coming.  Dov Kadin, of SACOG, back in August tweeted that existing need was a huge part of the variable.

“When I say that the numbers are increasing across the state, it’s not because we are expecting more growth. It’s entirely because the existing need is higher than its ever been. In SACOG, they make up over a quarter of our total number,” he tweeted.

Meanwhile, over the spring and early summer, a report from Next 10 noted, “The state of California continues to experience a housing crisis. Supply has not met demand for years, and it has become increasingly difficult to develop an adequate stock of affordable housing units, forcing some residents to move further away from job centers or out of state entirely (in) order to find affordable housing.

Next 10 notes: “There is no question that California’s RHNA [Regional Housing Needs Assessment] process has failed to live up to its stated purpose, as most jurisdictions have continued to fail to meet their housing goals and those that do perform well often do so because there’s a relatively low bar of success.

“While the recently passed housing legislation package of 2017 may help improve RHNA data accountability and transparency, more enforcement mechanisms may be necessary in order to meet existing goals, as (there) may be a comprehensive assessment of the goal-setting process to ensure it is not guaranteeing a continued shortage by setting goals according to the status quo, in which soaring costs and homelessness (are) on the rise.”