Local groups came together at noon on Tuesday to protest the continued policies of the Trump administration with regard to immigration policy, as well as to put pressure on Congressional Democrats, who control the House, “to stop the abuse being perpetrated by ICE and CBP in detention camps at the Southern border and around the country.”

While the crowd, notably smaller than the one on July 2 which drew between 250 and 300 participants, was lively, the most notable development may have been the response from the Congressman’s staff itself – a staffer identified by organizers as Debbi Gibbs, Deputy Chief of Staff and District Director, emerged from the office to complain about the noise of the crowd.

As Seth Sanders posted on Facebook, “Garamendi’s staff seem not to be bothered by the concentration camps that he sent a remarkable amount of your tax dollars to fund. Here staffer Debbi Gibbs comes out not to tell us his position (he doesn’t seem to have one) but to complain about the noise that Japanese American detention camp survivors are making.”

The incident caught many organizers and activists off guard.

The speakers who were told to quiet down today included the Rector of the Episcopal Church, the Rabbi of the county’s only synagogue, and a survivor of Japanese internment who was separated from her parents at age 4.

The Congressman’s staff did not respond to a Vanguard request for comment on this incident.

However, in a statement from Congressman Garamendi on the overall protest, he said, “I share this group’s outrage over the unconscionable and inhumane conditions children and families are subjected to in U.S. custody. This President’s cruel immigration policies are a stain on America’s history, and I will continue to fight back by supporting strong legislation to end the mistreatment of asylum seekers at the border. I greatly appreciate the passion our community has for this issue.”

“Today our specific task is to de-fund ICE and CBP in the upcoming budget vote,” one of the organizers stated.  “Why are we seeking to de-fund ICE?  Some people ask well shouldn’t these agencies have more money so they can address the humanitarian concerns at the border?”

“No,” was the resounding answer from the crowd.  She continued, “What ICE did with the increase in funding that Representative Garamendi voted for earlier this summer is drastically expand the capacity of their detention camps.”

“This is not a problem of lack of resources,” she said.  “This is a problem of ICE and CBP misusing the money that they have been given to unnecessarily and cruelly abuse immigrants.”

Greg Brucker said that “we are at an unfortunate crossroads in our country.  We are at the point where we are looking at a direct representation of the past.”  He asked, “If you were alive when the Nazis were taking over Germany, what would you have done to help stop them?

“What we’re seeing has happened before,” he said.  “What we’re watching, we experienced and we must say together that Never Again is Now!” 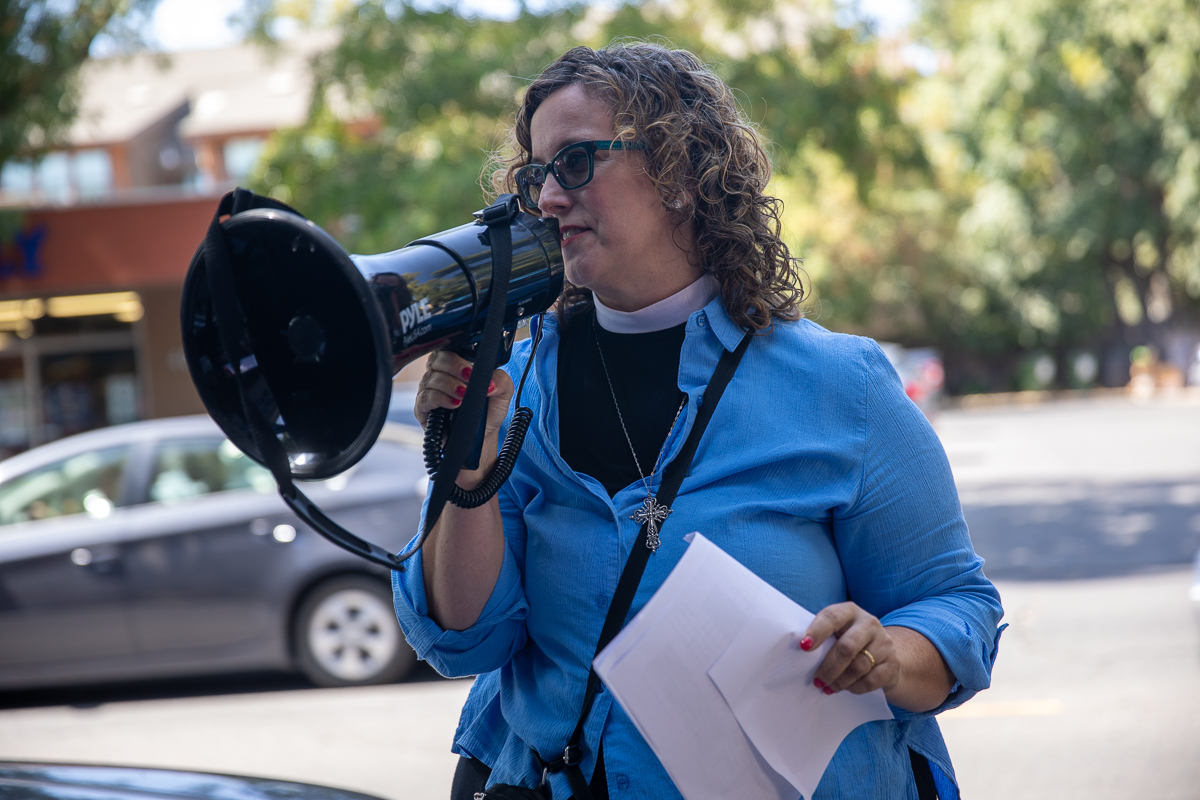 Rev. Pamela Dolan said that she is from one of the whitest, most mainstream and most establishment churches in the history of the US, the Episcopal Church.

“Even the Episcopal Church is beginning to wake up and beginning to understand that we cannot be on the sidelines,” she said.  “We need to show up and we need to amplify the voices of the people who have been on the frontlines and the people whose lives have been sacrificed to this evil – this evil that is being done in our names.”

Rabbi Greg Wolfe said, “Only when we look around and say you are my brother, you are my sister, only then can we say that God’s presence is with us.”  He said, “We have to treat each other as brothers and sisters.”

He referred to the story of Cain killing his brother Abel, after which he asks, “Am I my brother’s keeper?”  The Rabbi said, “God never answers his question and I believe that the whole Torah, the whole bible is, in fact, a response to that question.  Every day we are asked to be the brother and the sister’s keeper.  That means everyone that comes to this country is our brother and our sister – and we have a responsibility to take care of them and watch out for them.”

He added, “Everyone of us is an immigrant and a refugee.  If the doors were not open – we would not be here.  So we must make sure that the doors stay open for those who need us, who need a safe haven.”

Josh Kaizuka described the process of Japanese Americans during World War II being sent to relocation camps.  “Concentration camps,” he said.  “That’s what they were.”  He said, “They were imprisoned for years, in indefinite imprisonment for years.  That’s why we’re here today.” 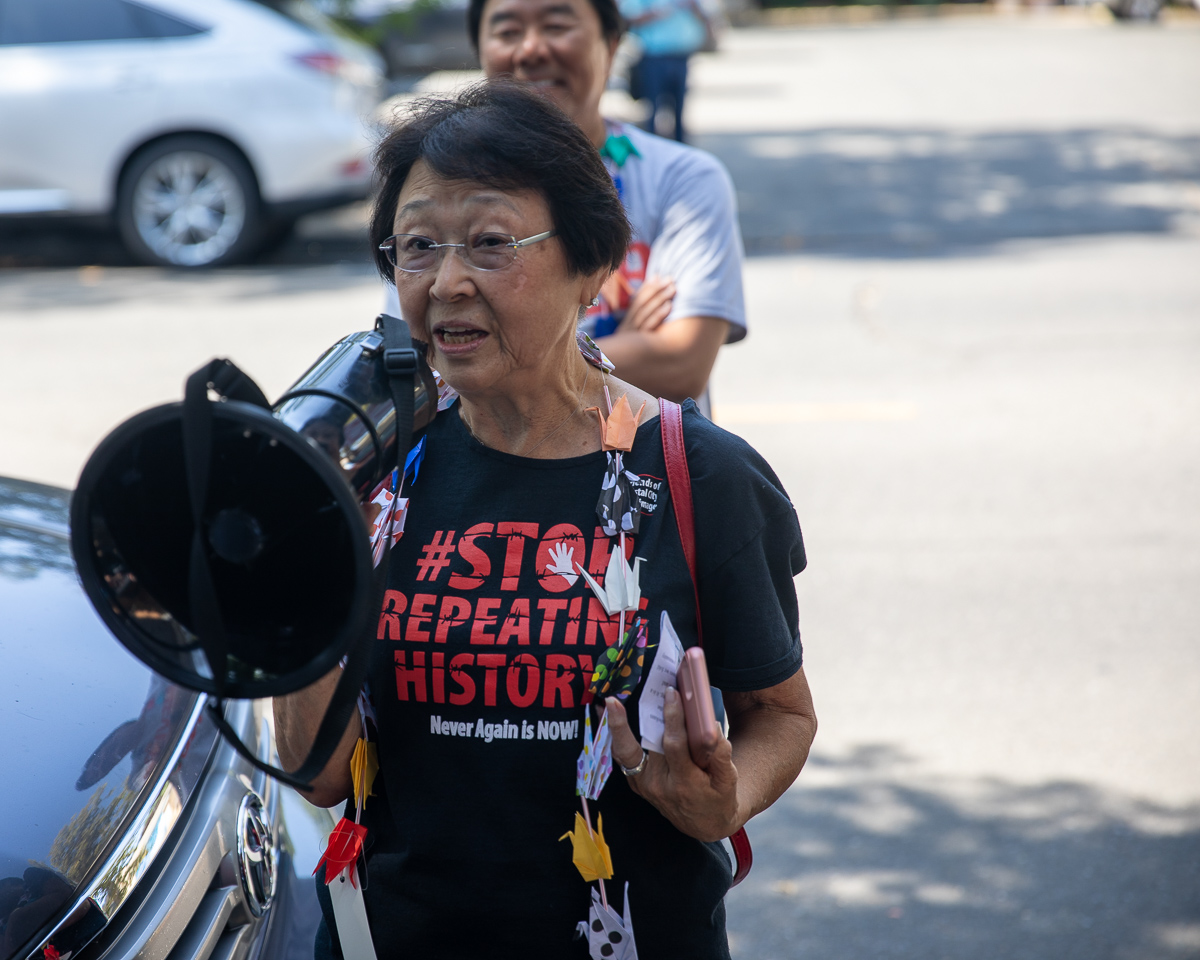 She added, “I could empathize when I heard about the children being separated because that happened to me.”  She was removed for medical reasons, “but they didn’t allow anyone to go with me – think about it, I was four years old.”

“These things have lasting effects,” she said.  “Generation after generation.”

Josh said he was detained by ICE from his sister’s home, as he prepared to apply for asylum.

“I had never committed a crime and was just picked up and taken to the police station here in Sacramento,” he said.   Within an hour, he was handcuffed, shackled, driven to Oakland and put on a plane with about 300 other men.  “We were flown to Arizona,” he said and kept in a for-profit prison for two and a half months.

Two and a half months later, it took the judge “five minutes to grant me bail.” 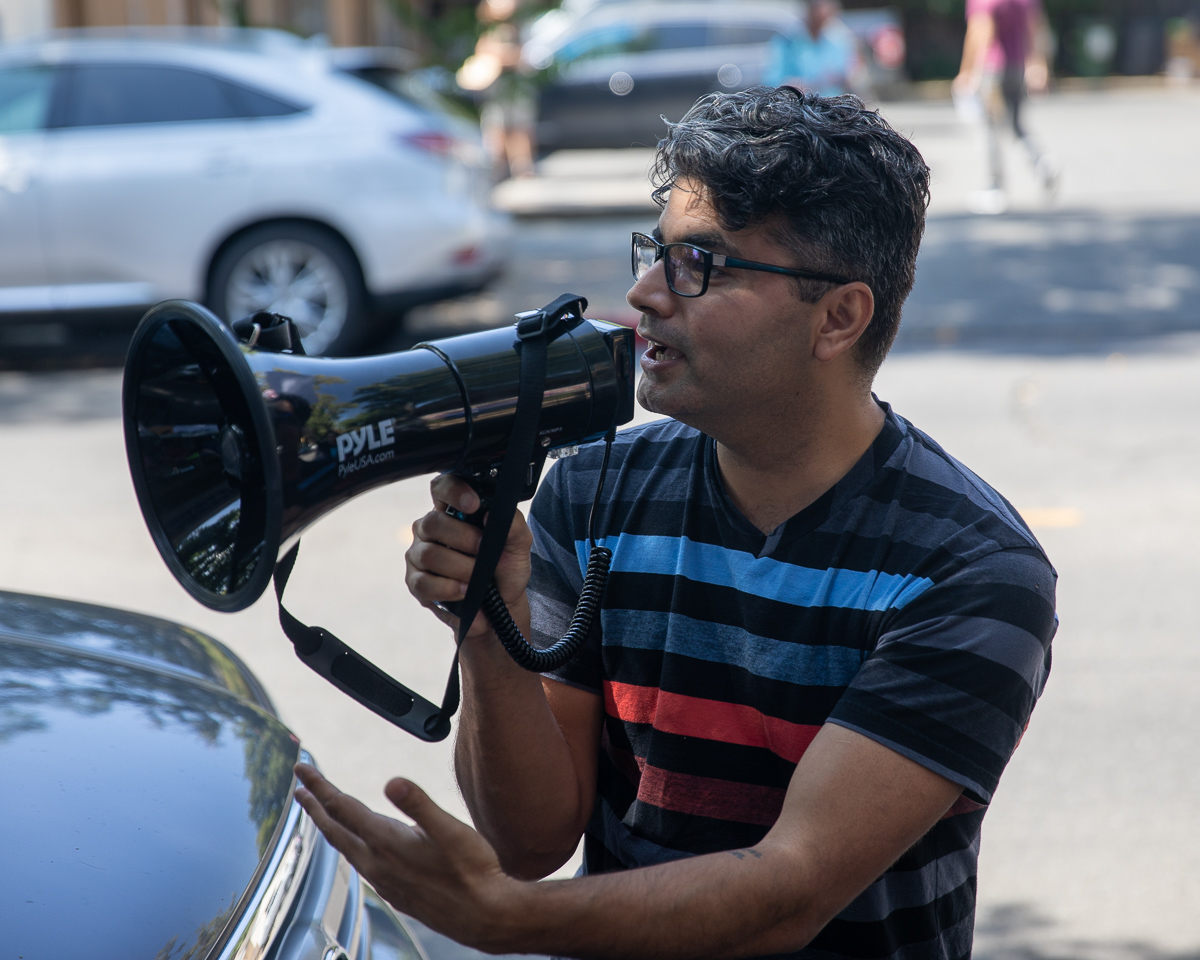 “This is what the detention of immigrants has become,” he said.  “It is a for-profit industry.”  This was in 2009.  “This has been going on for more than a decade,” he added.  “ICE has been operating outside of the law, whenever it can, whenever it has a chance, just to make more money.”

Annoosh Jarjorian talked about the time they spent talking to Garamendi’s staff about a house bill, which she said, “had guard rails on it – to ensure that any funding would be used exclusively for humanitarian care of the families and children inside of detention.”

However, the Senate passed their bill without any guard rails.  She said that the house, including John Garamendi, caved and let President Trump get what he wanted. 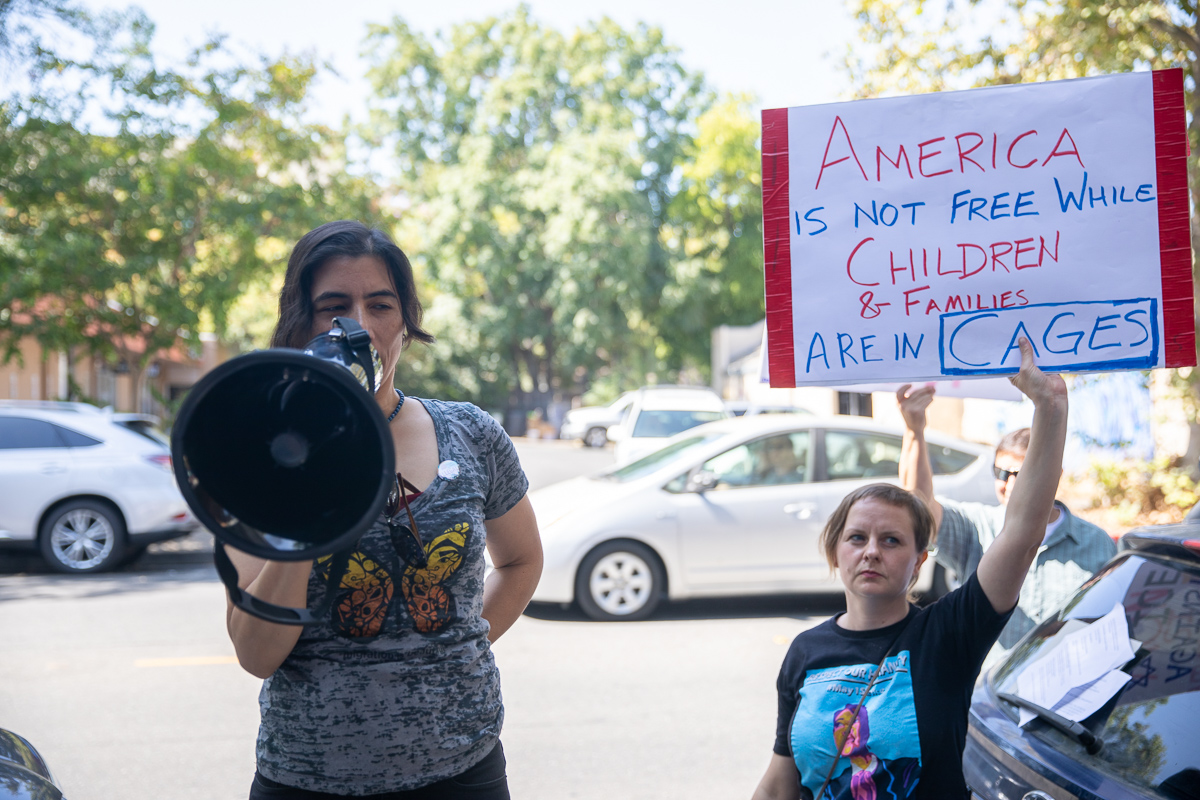 “Garamendi caved on that bill,” she said.  “He could have denied the Trump administration what they wanted…  But he rolled over.  That is not okay.”

She said that family separation is a very personal issue, noting that her kids – 9 and 11 and the nine-year-old still will not spend a night away from her – “Imagine the trauma to those children being separated by people who don’t speak their language and possibly being separated from their parents forever.” 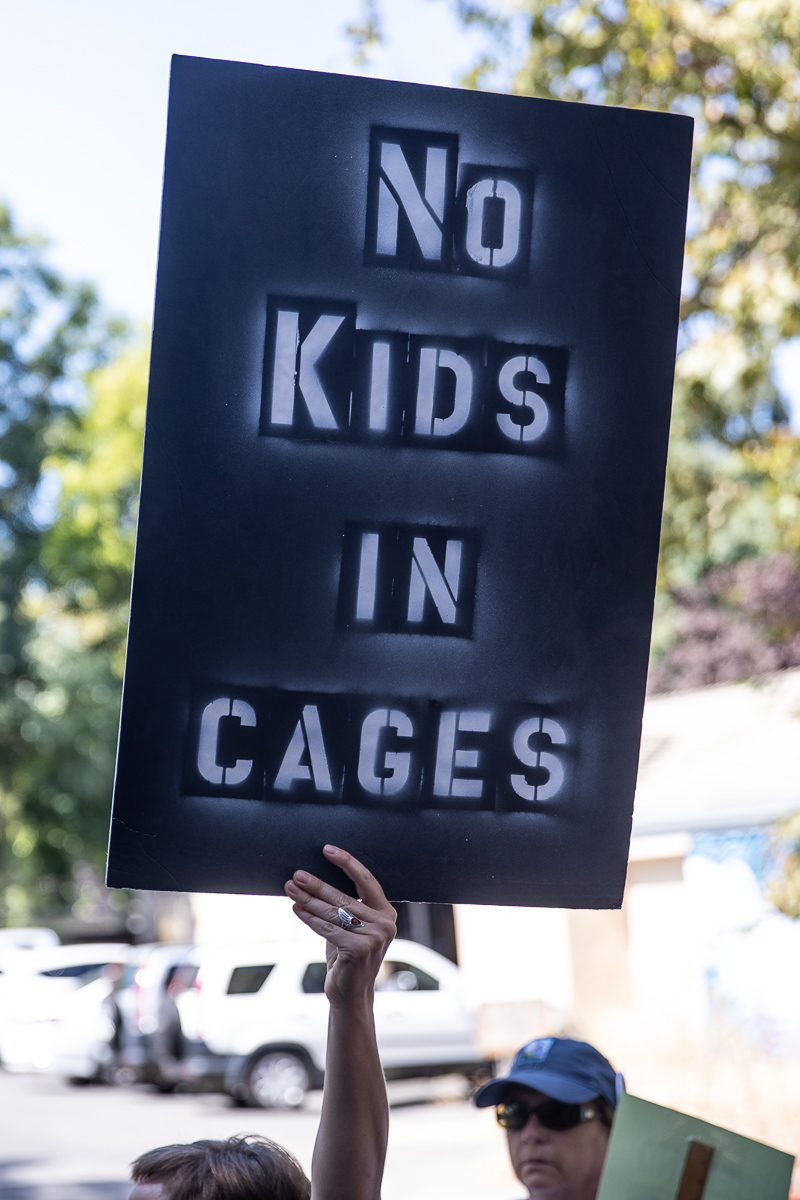 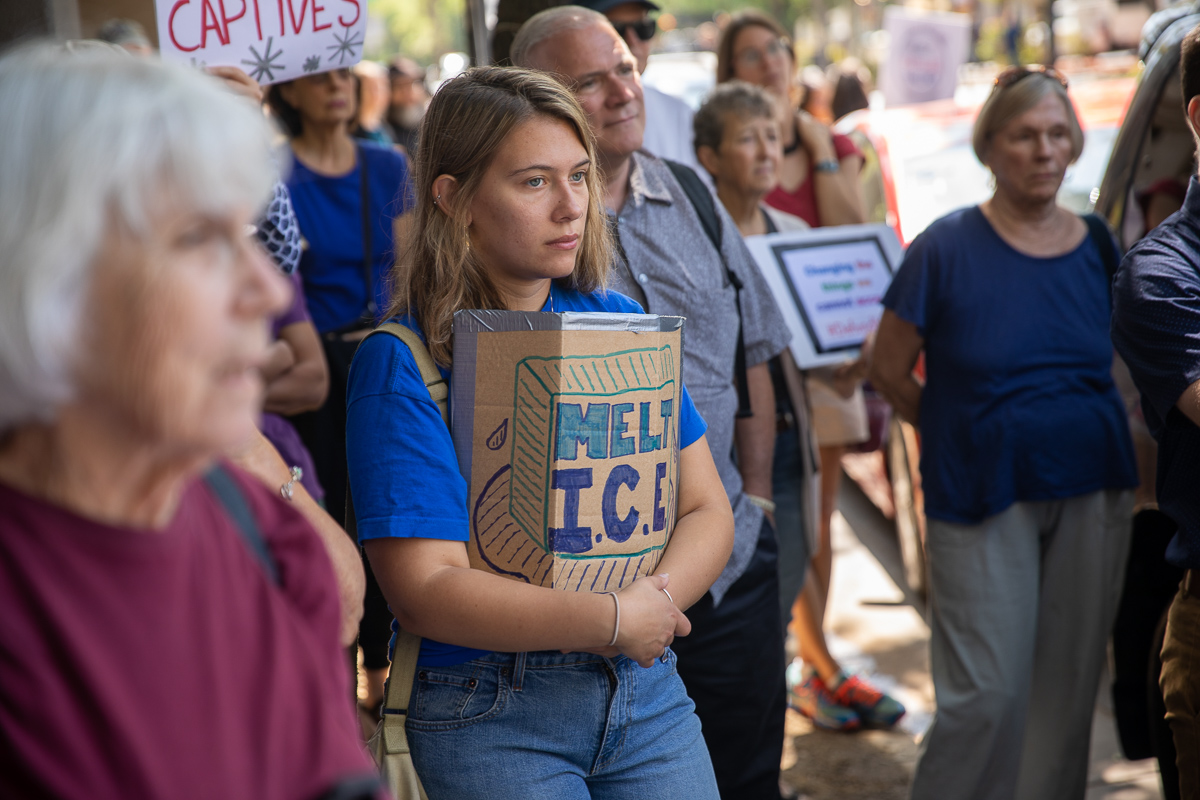 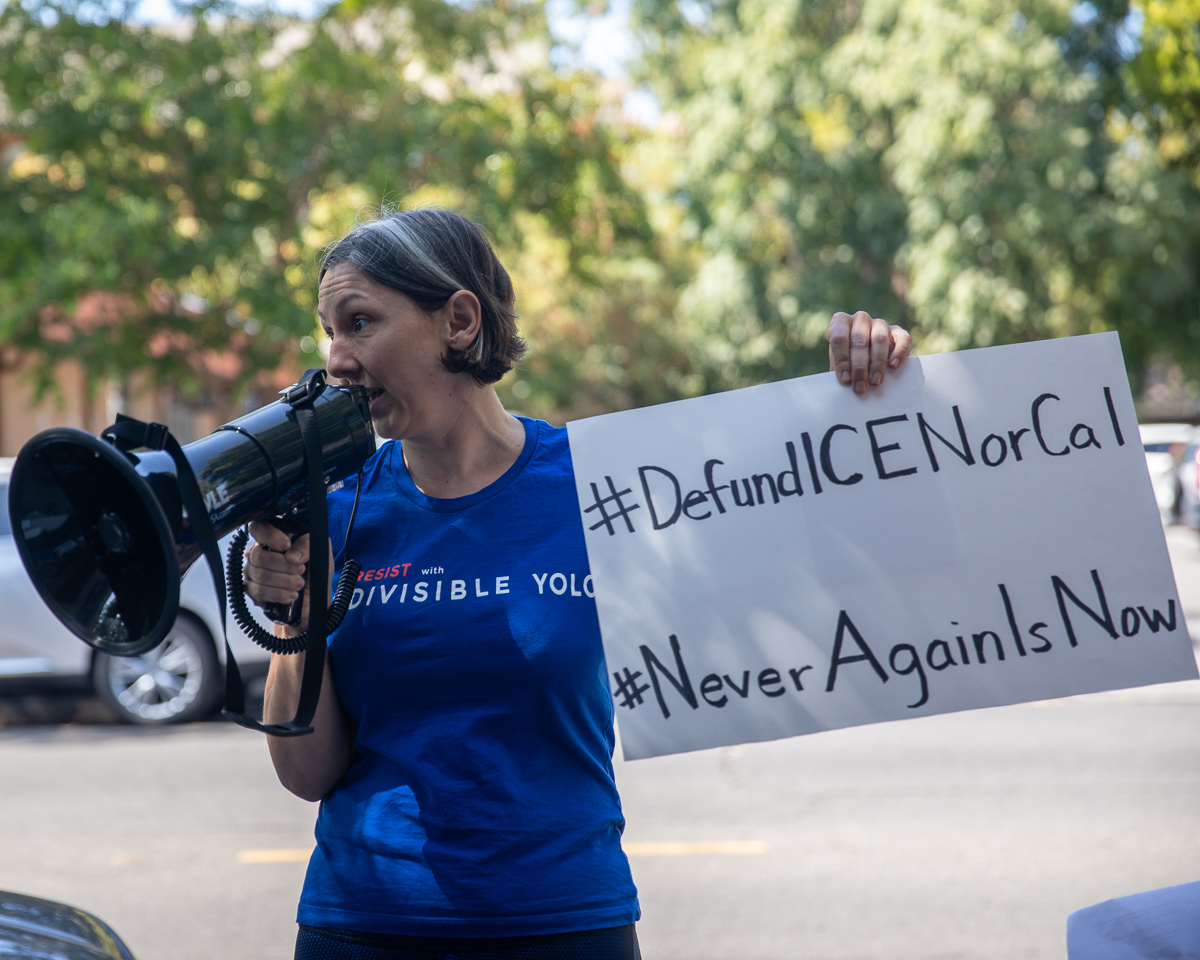 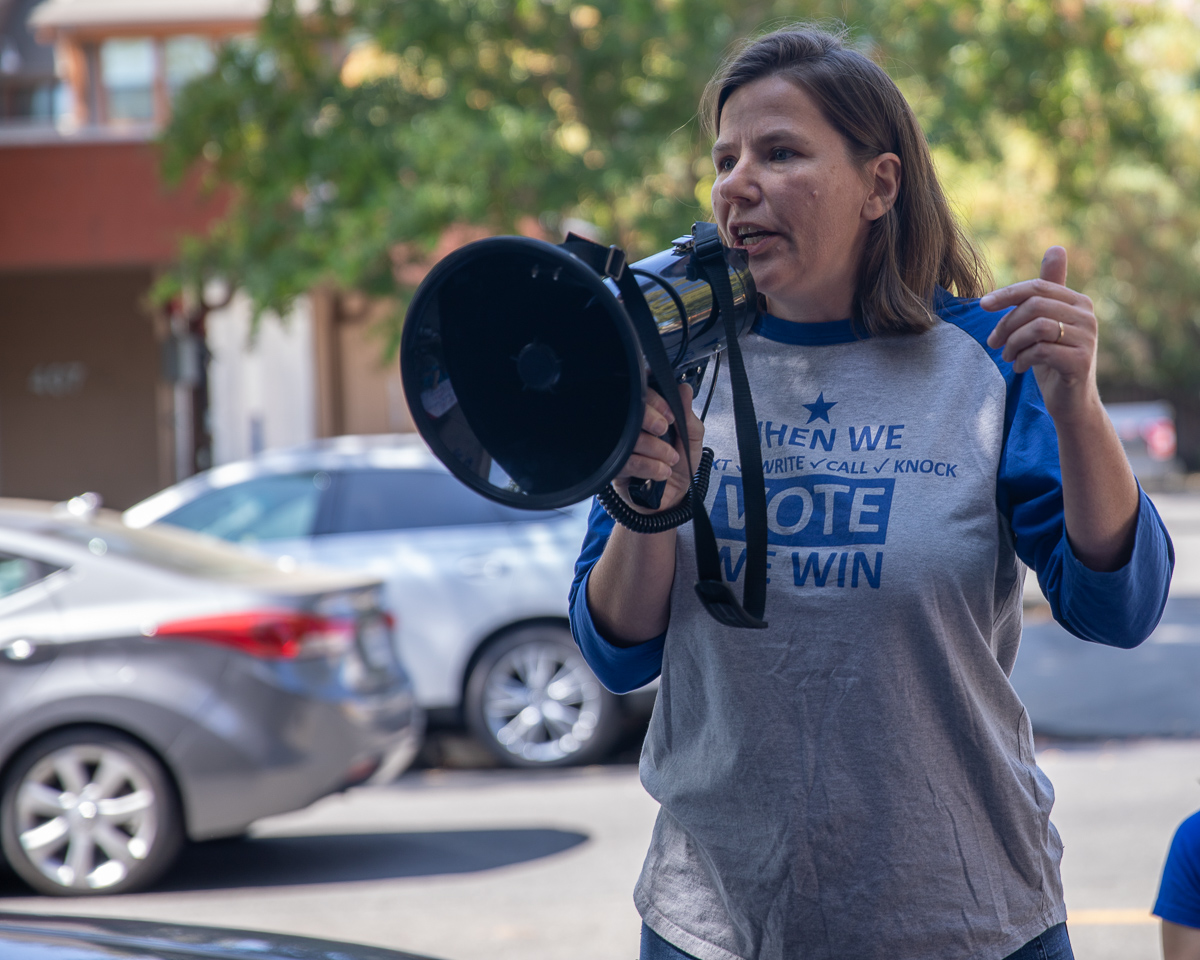