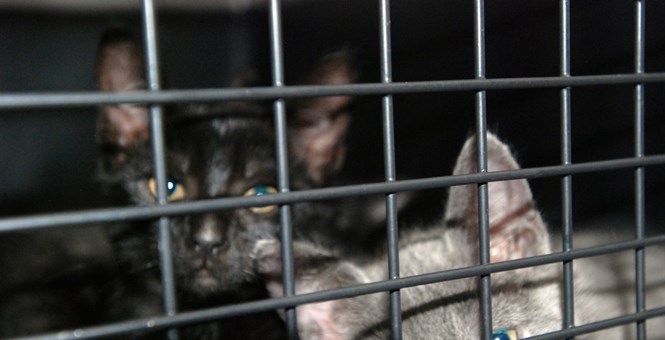 SACRAMENTO – This week, the U.S. House of Representatives unanimously approved a measure – the Animal Cruelty and Torture Act – that makes certain types of harm to animals a federal felony with punishment up to seven years in prison.

U.S. Senate and President Trump notwithstanding, recent Sacramento County Superior Court defendants in animal cruelty cases should breathe a sigh of relief that the law is not in place now.

Take Oliver Williams for instance. He was accused of strangling a pet macaw bird of his girlfriend’s and kicking her cat. And, oh yeah, he also allegedly assaulted the girlfriend with a gun.

This past week, Williams – facing a trial – took a plea deal of 14 years and four months in prison for the felony assaults. And a strike to go with one he received for a robbery conviction three decades ago.

And Williams, at a pre-trial hearing, took responsibility for killing the bird, “grabbing ‘AJ,’ a Macaw” and strangling it after drinking and arguing with his girlfriend, a “Wendy Doe.”

“Defendant squeezed AJ to death and then said he’d be back to kill her cats,” said the charging documents, adding that after law enforcement had been called and left, Williams came back to the home, kicked one cat in the face and threatened “Wendy Doe” with a gun, saying “he had friends” that would kill her.

Williams had a history of violence with his previous wife, whom he allegedly abused. No charges were filed, according to court documents, because he fled with their children and said he wouldn’t

return them unless she dropped the charges, which she did.

To Hilary Bagley, a Deputy District Attorney who has specialized in animal cruelty cases for maybe decades and heads a special unit now, Williams’ crimes are nothing new.

Like the Williams case, it’s well known in the criminal justice community that there is often a link between animal cruelty and crimes against humans.

In a relatively “minor” case earlier this month – Bagley said she has many other more gruesome examples than this one – Rauline Martinez escaped a conviction of misdemeanor animal cruelty, abuse and neglect by a narrow 11-1 to convict decision by a jury.

The district attorney hasn’t said whether the case, which needed just one more juror vote to convict to have found Martinez guilty, will be retried. Co-defendant Sasha Brown is now joined with Martinez and both would face the same charge.

Penal Code section 597 (b) is a misdemeanor and carries with it a year in county jail and/or a $20,000 fine for, in part, a person who “…tortures, torments, deprives of necessary sustenance, drink, or shelter, cruelly beats, mutilates, or cruelly kills any animal, or causes any animal to be deprived of necessary sustenance, drink, shelter, or to be cruelly beaten (or) subjects any animal to needless suffering, or inflicts unnecessary cruelty upon the animal, or in any manner abuses any animal, or fails to provide the animal with proper food, drink, or shelter.”

In her closing argument in the Martinez case, Bagley said the defendant “got lucky,” as her dogs, allegedly left in a sweltering hot car without proper food and water, survived after Martinez “created inhumane conditions.”

Martinez’s actions, said Bagley, were “like elder abuse or child abuse….(the dogs) can’t tell you their collar is too tight. She watered them when she had to, when it was convenient….she used excessive tethering,” said Bagley, noting that the animals were tied tightly so they couldn’t move and wouldn’t be seen by passersby.

Law enforcement, at one point, pulled the dogs out and gave Martinez a warning. Bagley criticized officials for not doing more.

Bagley told the jury that Martinez tethered her dogs so “people can’t see them (and) she told several lies when testifying. She has an agenda; she lies under oath…the dogs can’t stand; they can’t spread out” in the hot car.

“She represents herself as homeless but she’s paying $600 rent; she said she had no other choice (but) she didn’t even tell her mother until court,” said Bagley. “She could have taken the dogs to shelters. Anyone who cared about animals wouldn’t leave them in a hot car.”

But that’s not how Sacramento County Assistant Public Defender Ibraham Dbouk saw it.

“The DA is taking snapshots of a complicated case,” Dbouk said to the jury, emphasizing that “dogs are different than humans…they eat feces, drink out of the toilet boil,” in an attempt to minimize Bagley’s comparison of animal abuse to senior or child abuse.

Dbouk said some veterinarians said the dogs were not harmed by being locked in a car on super-heated days, and he said that Martinez was usually out with her dogs during the day. Some vets said there was no panting by the dogs, and if there was it could mean they were just happy.

“There is no evidence of suffering….it’s a shame they can’t run up here and tell you how well they were taken care of,” said Dbouk, adding that Martinez had no other choice because she had been kicked out of her apartment and wasn’t helped by family.

“Her (Martinez) testimony was genuine. She wanted to tell her side of the story. Her dogs had their shots, had their licenses. She cared about them,” Dbouk told jurors.

All but one of the jurors voted to convict. Bagley said her office will soon decide to retry or not retry the case.