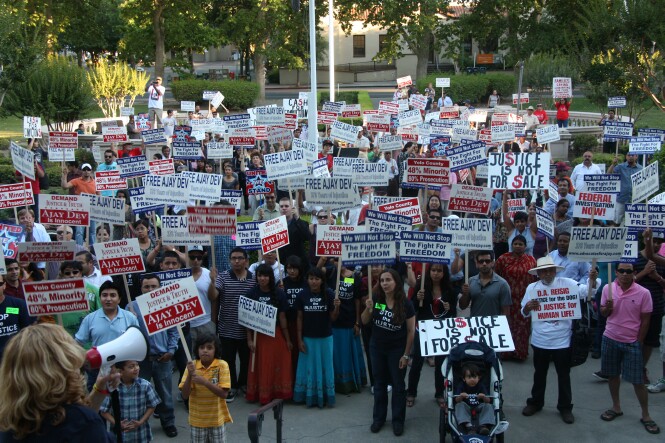 We are two weeks out from another evidentiary hearing for Ajay Dev, but perhaps the most telling part of the last one that occurred on September 12 is that DA Ryan Couzens was going to play hardball and attempt to insinuate impropriety by the Dev family in implied allegations that they might be swaying witnesses.

One of the allegations was that Mr. Yadev benefitted from the Dev family’s donations to his school.  However, it came out under re-direct that actually the founders of the school were more closely related to alleged victim than to close relatives of Ajay Dev.

However, the bigger insinuation by Mr. Couzens was that Sanjay Dev earned favorable treatment by paying for Mr. Yadev’s flight to America.

Mr. Couzens after lunch continued to push the idea that Sanjay Dev had financed the trip and tried to allege that the family had influenced the testimony of Mr. Yadev.  Here Mr. Yadev held firm – he had reached out to Sanjay Dev through the grandson of someone in the village to see if Mr. Dev would pay for his travel expenses, but he had not been in great contact with Mr. Dev’s family or talked to them about his testimony.

After repeated insinuations, Judge Beronio asked where Mr. Couzens was going with this – and he admitted that he was seeking to tie Mr. Yadev’s testimony to gaining benefits from Ajay Dev’s family.

The judge did not appear to buy into it, saying that she was done with the line of questioning, and questioned where he was going.  Even after the admonishment, Mr. Couzens continued to attempt to imply that Mr. Yadev was lying in order to fund his school (from which he is retired) or to get travel expenses to America.

Amplifying on this point, Patty Pursell, sister-in-law of Ajay Dev, recently posted on the Vanguard that it was Mr. Couzens’ and Deputy DA Steve Mount’s inflexibility that led to this arrangement.

The attorneys first asked if the witnesses from Nepal could do a video interview since they were having difficulty with visa issues, plus the cost for many of them was prohibitive.  This came out in several discussions in open court.

But the DA’s office was not willing to do that.

Ms. Pursell continued, “Then the DA’s office was asked if they would pay the costs for the witnesses to come to testify.  The DA’s office again said no.”

These are crucial witnesses, as they directly witnessed comments by the alleged victim that undermine the validity of her story.  She acknowledged to at least six people in real time, contemporaneous to the allegations and trial, that she was making up the allegations as a way to remain in America and a way to get back at Mr. Dev for supposedly being too strict.

Along with new evidence of the actual content of the pretext phone call, these are crucial to showing that Mr. Dev and his attorneys and supporters have been right all along about the actual motivation of the young woman that the Devs took into their home and adopted.

But it has become clear that the DA’s office has no interest whatsoever in learning the truth – they are more concern with attempting to protect their conviction, even if it means keeping an innocent man in prison.

Denied other ways to produce the testimony by the DA’s office, the family had little choice but to take matters into their own hands.

As Ms. Pursell points out, “ The witnesses from Nepal that were first-hand witnesses to the accuser saying she lied about the charges are from a poor village and cannot afford the costs of coming to testify.”

She said, “Therefore, Ajay’s family had to take upon themselves the cost of flying these very important witnesses to America to testify.”

She added, pointedly, “I find it very unnerving that DDA Couzens is now trying to say that because Ajay’s family beared the costs of getting the witness to America, that means that they have dissuaded/tampered with the witness.  You can’t have it both ways.  The DA’s office gave Ajay’s family no other choice to have the truth be heard.”

Patty Pursell is spot on here.  The DA’s office in typical Ryan Couzens fashion is dictating the rules here and then when they force a course of action, they are attempting to use it against him.

The petitioners made multiple efforts to get the witnesses to the US without Ajay Dev’s family having to pay for their airfare.  The DA and specifically Mr. Couzens and Mr. Mount thwarted each effort.  They then attempted to use that against them.

So far at least, Judge Beronio has not seemed to buy into it.  But Mr. Couzens is continuing with the kitchen sink approach, which is not only going to make it difficult for the Dev family but will increase their costs as it drags these hearings out.

It leads us again to conclude that the DA’s office is more concerned with preserving their conviction than they are making sure that an innocent man is not serving time in prison.

You can listen to Ajay Dev speak on our podcast:

3 thoughts on “My View: DA Plays Hardball in Efforts to Free Ajay Dev”