A small handful of protesters took to the front of the Hall of Justice in San Francisco Monday, protesting the first day of District Attorney Suzy Loftus’ tenure – having been appointed by Mayor London Breed – as well as their perception of Ms. Loftus, supported by law enforcement, doing little in the way of holding police accountable for a number of officer-involved shootings.

term ahead of next month’s elections.

The move did not sit well with many supporting deeper reforms to prosecution.

The ACLU in a press release early in October wrote, “The ACLU Foundation of Northern California strongly opposes this appointment for the political machination that it is, designed to give one candidate an unfair electoral advantage over others.”

Maria Christina Gutierrez, a spokesperson for the protesters, told the Vanguard that this was the first day for Suzy Loftus, having “been appointed district attorney by the mayor, violated all of the democratic rights as to who we elect next.  After 110 years, we have never been able to elect freely.” 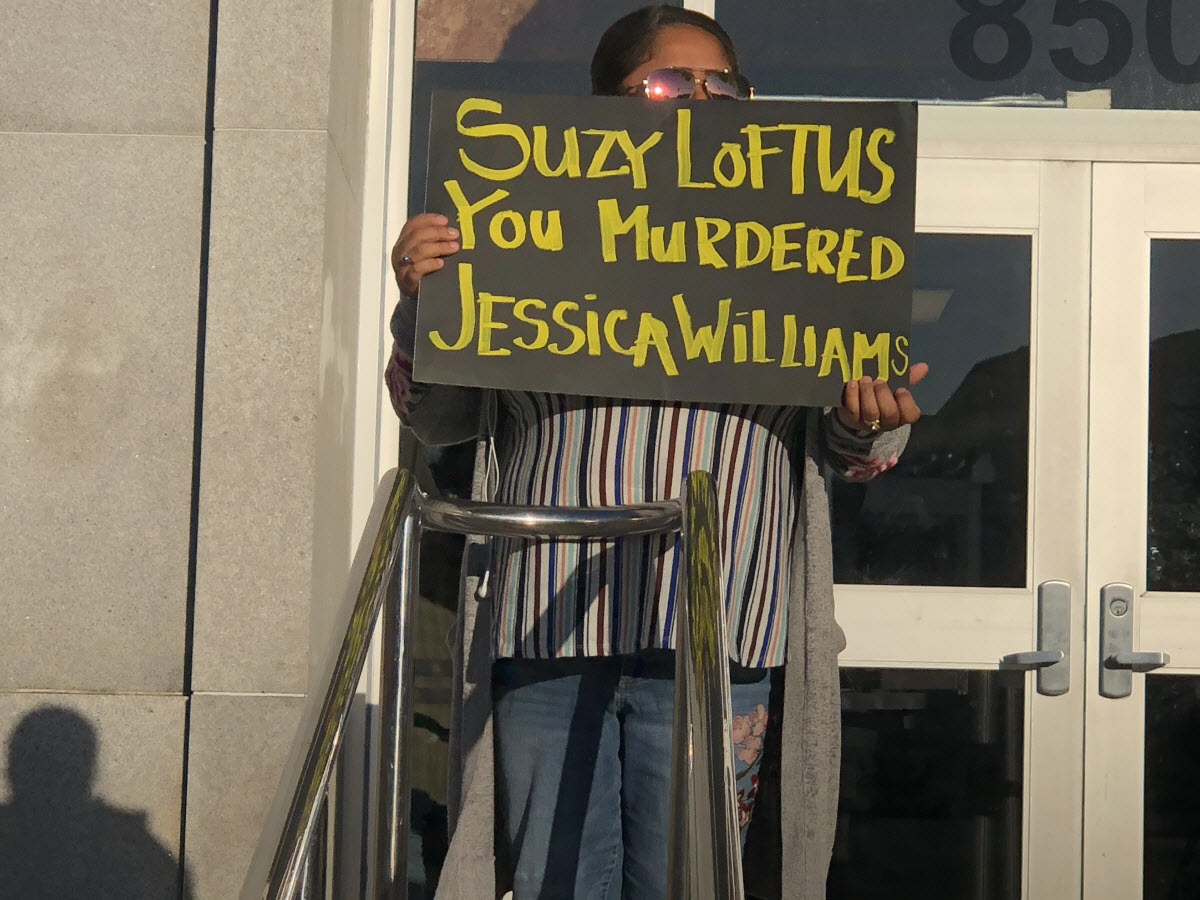 Chief among their concerns – her ties to law enforcement.

“She was the President of the Police Commission when they murdered five of the people that have been murdered by the police – she didn’t do anything – she actually protected Greg Suhr (the police chief at the time),” Ms. Gutierrez said.

She said that she was part of a small group of people that went on a hunger strike for 17 to 18 days as the result of the shootings, pushing for “an end to this violence.

“She didn’t do anything during those three years,” she said.

Ms. Gutierrez said that now she is clearly in the pockets of the police, having been endorsed by the police officer’s association.

“The police officer’s association is a non-grata organization in this city – it’s like the KKK,” she added.  “They supported all the racist texting that happened before among the officers.”

Ms. Gutierrez charged that “she never took a stand (against that).

“The last one that was murdered was Jessica Williams, and then they had no choice but to ask Chief Suhr to resign.”

She said, “She won’t (reform).  She doesn’t want to reform anything.”

Ms. Gutierrez said they are not supporting any particular candidate, they only want to raise these issues and they are not connected to any campaign.

In 2016, Chief Suhr, following a string of police shootings, was asked to resign by the late mayor, Ed Lee.  The shootings also overlapped with a scandal over racist test messages between police officers and released to the public . 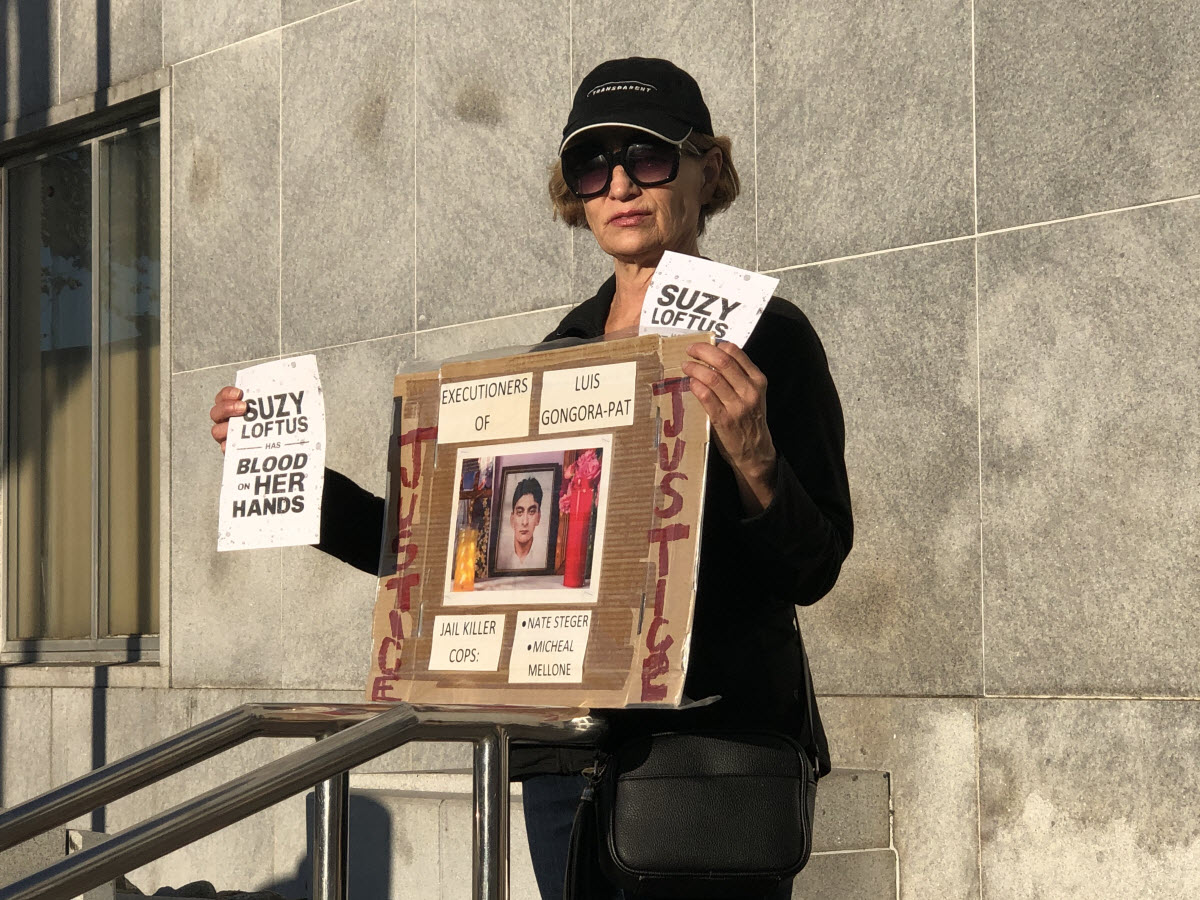 For her part, Ms. Loftus has sidestepped concerns about the former chief’s support telling the Appeal, “My record on police reform is unassailable…  I won’t allow my opponents to use Greg Suhr as a tool to divide us. San Franciscans are tired of the ‘us versus them’ rhetoric.”

But one of her opponents has a different view.

Chesa Boudin, the public defender, who has run on a Larry Krasner-style reform agenda, said that the protest is reflective “of a dissatisfaction with Suzy Loftus personally in terms of her track record on the police commission.”

He accused her at various times of failing to stand up for the same principles that she is now advocating for as a candidate.

“More broadly,” he said, “it was a reaction toward tampering with the democratic process.”

Chesa Boudin understandably was critical of the appointment of his opponent three weeks before the election to fill out the term vacated by George Gascon.

“I thought it was a transparently political move that has nothing to do with public safety and everything to do with an attempt to undermine the democratic process,” he said.  “Voters are seeing through it and it’s going to turn them off to backing a machine-backed candidate.” 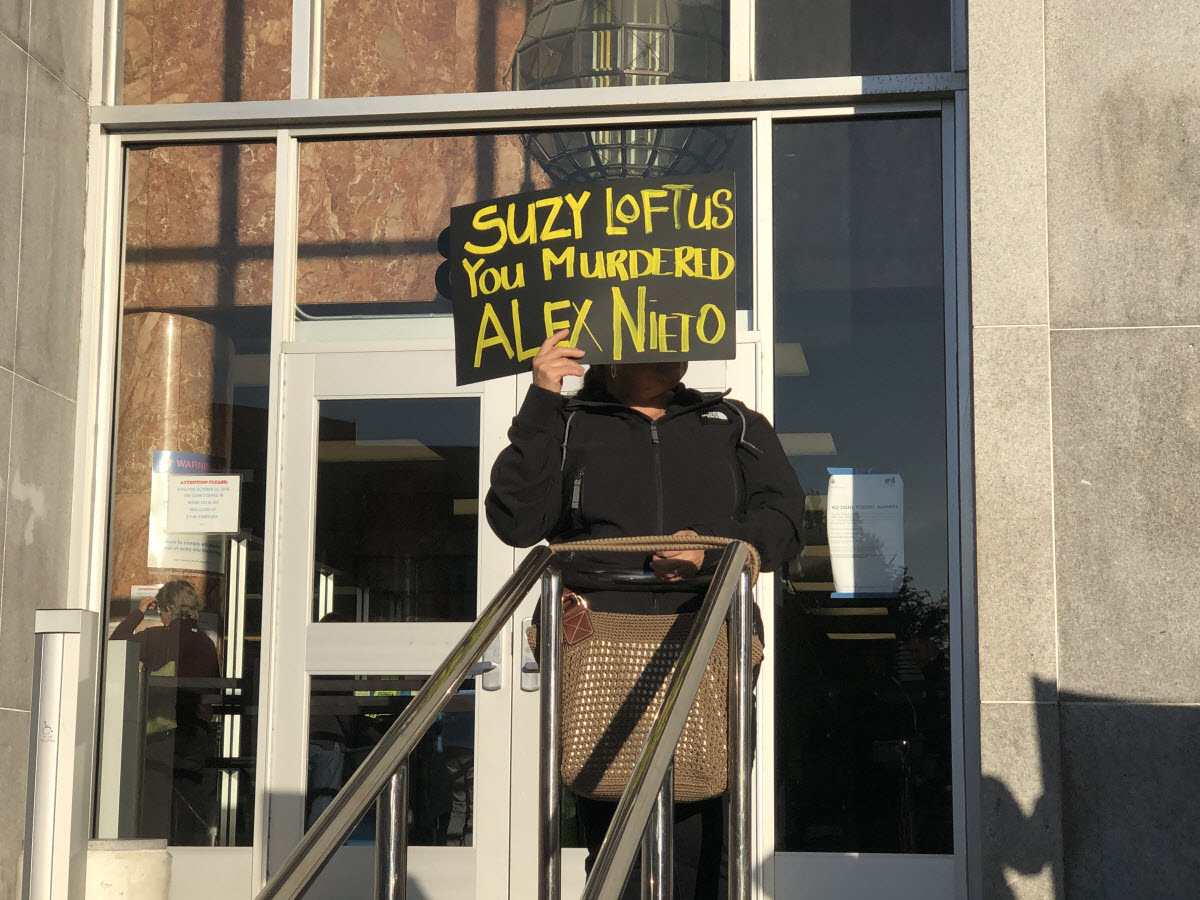 “Voters in San Francisco of all places really value a democratic process,” he said.  “They want a district attorney that’s going to be accountable to them, not to the mayor.”

Mr. Boudin believes this move has actually backfired on Ms. Loftus.  He said they are walking doors and they are hearing similar things from voters.

“People who did not have their mind made up before this happen, now know that the one person they won’t vote for is Suzy Loftus,” he said.

“Suzy Loftus was in a position to play a leadership role not only on police accountability but on a wide range of other issues,” he said.  “She failed to hold a single officer accountable for excessive force despite all of the shootings and killings of civilians on her tenure.”

Suzy Loftus of course defends her record. telling the Appeal for instance that it would have been inappropriate to call for the firings of police officers involved in fatal shootings, or requesting criminal charges be filed against them. 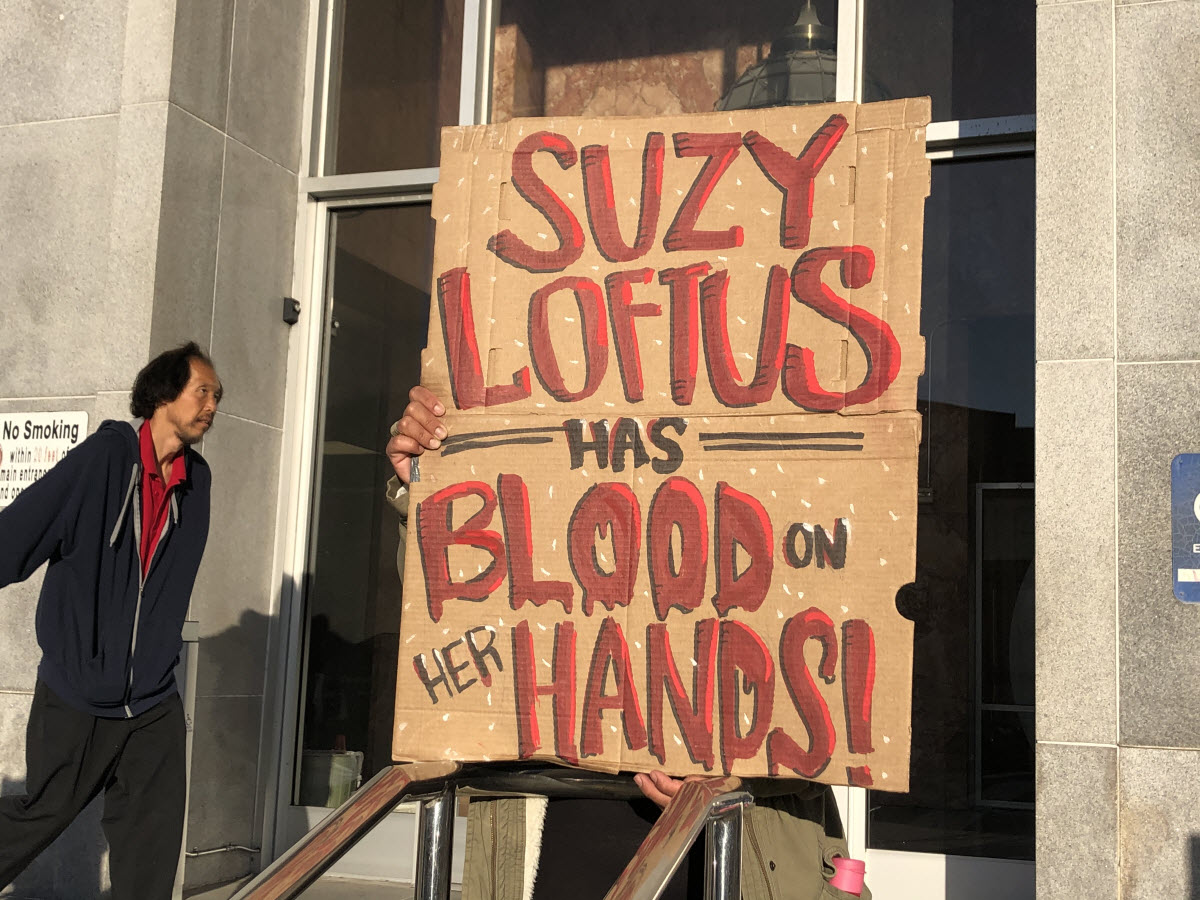 “As a police commissioner, you serve in a quasi judicial role and conduct evidentiary hearings in discipline matters,” she said in an email as reported by the Appeal. “As a result, you must remain neutral regarding cases that could come before you and refrain from making comments on the specifics of the cases.”

The intrigue will apparently last three more weeks.  A San Francisco Chronicle poll has found a close race between Chesa Boudin and Suzy Loftus, with the outsider leading 21-18.  That is inside the margin of error, but indicative that this is likely to be a close fight to the finish.

One thought on “Protesters in Front of SF Court, Angry at Loftus Appointment, Lack of Action on Police Shootings”