SACRAMENTO – The Florida-based GEO Group – one of the companies targeted by the Governor when he signed a sweeping measure last Friday outlawing private prisons and migrant detention centers – was the focus of a rally Tuesday by immigration rights and other groups in front of a nondescript, downtown commercial building.

Bonta, who amended his bill late in the session to include detention centers housing thousands of migrants seeking asylum, said “we are sending a powerful message that we vehemently oppose the practice of profiteering off the backs of Californians in custody, that we will stand up for the health, safety and welfare of our people, and that we are committed to humane treatment for all.”

He added that “These Wall Street-owned for-profit, private facilities inhumanely treat people as commodities. These companies are incentivized to maximize profits and minimize costs— including the important ‘costs’ of investments in programs, services and rehabilitation efforts that reduce recidivism rates and increase success for Californians upon their reentry into society.”

But it’s the legislation’s dead-eye aim at the inhumane treatment of migrants at the border that brought protestors to the Geo Group offices in Sacramento Tuesday.

“We’ve all seen the horrific humanitarian crisis playing out along the border. No human being deserves to be held in the well-documented cruel conditions in these for-profit, private facilities….AB 32 was expanded to cover civil detention facilities as well as prisons,” said Bonta.

The measure prevents the state from entering a new contract or renewing an old one with a for-profit prison, in or out of state, after the end of 2019. The state’s four contracts with private companies for criminal detention that will be ended by Jan. 1, 2020. That includes the Geo Group’s four private prisons.

No one for GEO group was available Tuesday to comment on the rally on their doorstep. GEO Group and CoreCivic, according to state lobbying reports on file, spent more than $160,000 for lobbying to

Demonstrators Tuesday in Sacramento pointed to inhumane conditions in private facilities holding migrant detainees. Homeland Security’s Inspector General documented more than 14,000 health and safety problems in contracted facilities between Oct. 2015 and June 2018. ICE only imposed penalties in two of the cases, according to the IG.

“Family separation of migrant families has not ended; it just looks different,” said one speaker Tuesday in Sacramento representing a coalition of Jewish groups, who gathered in front of GEO Group to mark the Jewish holiday of Sukkot and call for an end to for-profit immigrant detention and surveillance.

Rabbi Greg Wolfe of Congregation Bet Haverim in Davis, who led the service, explained that Sukkot is a harvest festival that also commemorates the Exodus from oppression in Egypt and the wandering in the desert in search of refuge. During this time, he said, Jews build temporary structures, where they eat meals and host guests, which invites reflection about the vulnerability of not having a permanent home, and communicates the obligation to offer sanctuary and sustenance to others.

“We welcome them (detainees), and invite them in. Freedom and refuge to all,” said the Rabbi to a rally of about 50 people.

While one speaker, who migrated to the U.S. from Afghanistan more than 10 years ago, said he remembered not the name “but the tears” of fellow detainees, blamed the Trump Administration, he also pointed a finger at the Obama era when “about 500,000 people were sent away.”

The coalition said the Tuesday action was “a statement of protest against GEO Group’s business with ICE, which brings its shareholders huge profits from the detention and surveillance of undocumented people and asylum seekers.

The coalition, in a statement, protested “inhumane conditions at for-profit detention centers…the financial motive leads to increased, unnecessary detention of people, including families, who pose no threat to the public.”

Organizers pointed to points in history when Jews have also sought refuge from violence and oppression.

“Many people who will attend on Tuesday have family stories of immigration – some have ancestors who escaped the Russian pogroms of the 1800s and early 1900s, and some have grandparents and family who narrowly escaped the Holocaust,” said Greg Brucker of Jewish Action NorCal.

“Though many Jewish Immigrants were welcomed here, the same ‘public charge’ regulation that the Trump Administration added as a requirement for settling here, was also in place during the 30s, preventing some Jews from being allowed to settle. Those Jews were ultimately returned to Europe and murdered in the Holocaust. Those allowed to settle were treated with contempt.

“We can put ourselves in the shoes of people who are seeking a home in this country, but instead they’re locked up or fitted with trackers–so a corporation makes a profit. We can’t look away when this company is making hundreds of millions of dollars by harming other people who are looking for safe refuge away from the violence and persecution in their home country.” 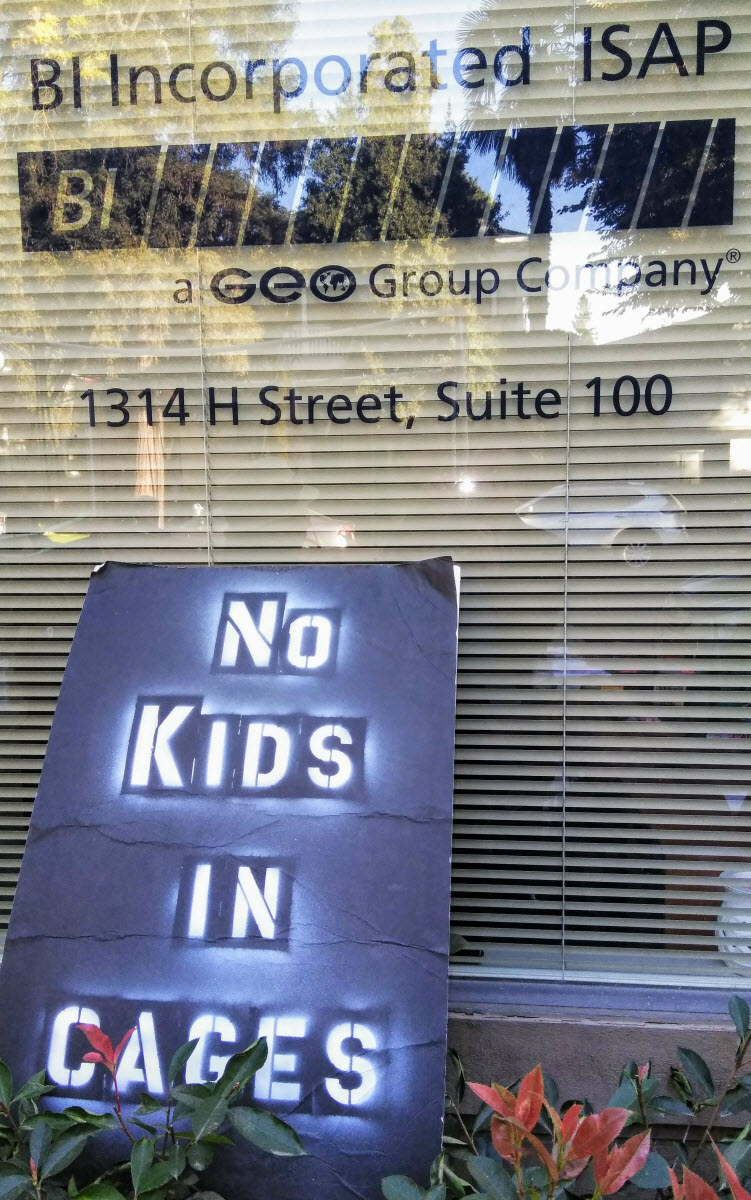 Local attorney Josh Kaizuka, representing the Japanese American Citizens League, Florin Chapter, said that when about 120,000 Japanese Americans were sent to internment camps at the beginning of World War II, “there was no one to speak out.”

He noted that when survivors of the camps protested earlier this year the detainment of migrant children at Ft. Sill, Oklahoma they were ready to be arrested – Ft. Sill, he said, had been a site for Japanese American internment, and before that, a “re-education” center for Native Americans.

A few weeks after a handful of Japanese American internment camp survivors and descendants confronted the facility, thousands marched on it. The governor of Oklahoma subsequently nixed the idea of housing any migrant children at Ft. Sill.

One of those who marched on Ft. Sill, was Dr. Satsuki Ina, former CSU Sacramento professor, who Kaizuka called his “hero.” Ina is one of the founders of Tsuru for Solidarity, a non-violent, direct action project that supports the communities targeted today, including Latinx, Native American/Indigenous, African American.

“Her father was taken out (at a WWII internment camp) because he questioned the due process of interning them,” said Kaizuka. He said she became a psychotherapist to help those with “generational trauma” from the camps because people did not speak out or about what happened to Japanese Americans.

“Together, we can sure this (Japanese internment camps) doesn’t happen again. Never again,” said Kaizuka who said a planned 120,000 person “pilgrimage to close the camps” to D.C. next year to protest Trump policies will “be a damn good protest” if Trump is still in office, or a “damn good celebration” if Trump is impeached.