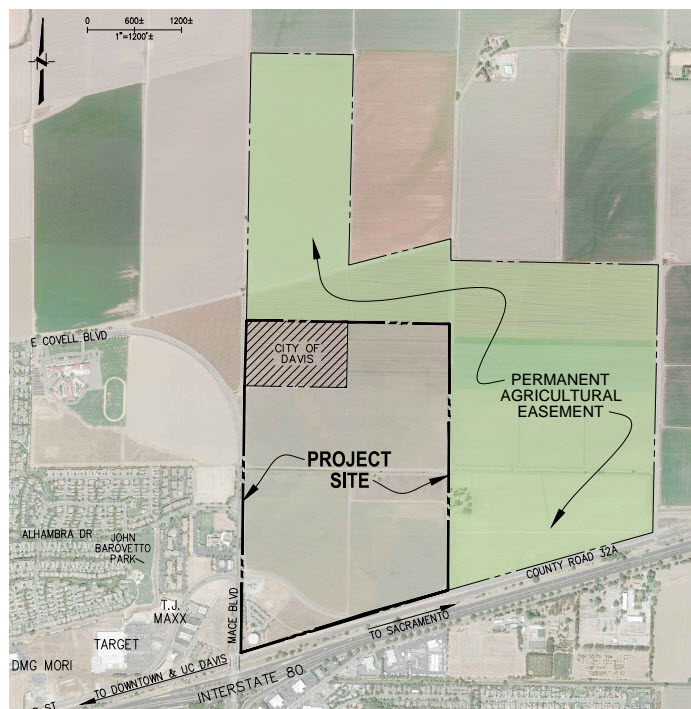 In 2013, as Davis was dealt a blow from losing Bayer Crop Science, formerly AgraQuest, Commercial Real Estate Broker Jim Gray wrote an op-ed telling Davis not to beat itself up over the loss.

“Large employers like Bayer are the quality of firm that Davis should try to attract and keep. Proximity to world-class UC Davis; a highly educated work force; commitment to sustainability, greenbelts and bike paths; a vibrant downtown; and a great community in which to live, work and raise our kids are some of the attributes that Davis has in spades,” Jim Gray wrote.

But what Davis didn’t have was “a large, vacant, bargain-basement facility that could be acquired at a fire-sale price.”  He added, “It wouldn’t be wise economic or public policy to have an oversupply of distressed empty buildings sitting vacant, hoping that a user would come along.”

But the loss of Bayer, which started as AgraQuest and was founded by a Davis local before being bought out by the multi-national Bayer corporation, was a warning sign.

So too was the appearance of Tyler Schilling in June 2014 before the Davis City Council.

He warned the council, “We’re going to need a sizable parcel to build a new facility and I would dearly love to be able to do it here in Davis.”

At the time, the hope was that would be at the Mace Ranch Innovation Center.  That was not to be.  Davis even got a reprieve when the oil market tilted downward, delaying the need for expansion.  But that will soon prove to be a temporary reprieve if the rumors of an imminent move prove to be accurate.

There are those who are arguing that Davis actually has 124.5 acres of commercially zoned properties in Davis   But at best that’s an illusion, as we demonstrated back in January when the inventory came before council in the first place.

For starters, 33.5 of those acres are owned by Sutter Davis and Kaiser and are set aside by the health care companies for hospital and medical facility expansion.

Moreover, another 25 to 30 acres off Second Street is currently the Frontier Fertilizer Superfund Site.  At some point that land would be available and in a good location for high tech

economic development, but right now that land is not available and won’t likely be so for several decades.

That leaves us with perhaps 60 to 70 acres.  Of that available land, only the 14.81-acre site at Chiles and Cowell would seem to be large enough to support substantial commercial business opportunities.  That site did have the larger Panatoni proposal a few years ago.

“It’s a good site, in my opinion, for the development of amenities,” Jim Gray told us in January.  But unfortunately, issues with ownership of that site might prevent anything from being built there.

Where does that leave us?  Maybe 50 acres of land, but all of it small – 7 acres or less.  Nothing that is going to support a 20-acre Schilling Robotics development like they appear to be looking at in West Sacramento.

Even getting another Mori Seiki is in grave doubt.  That company purchased 14.5 acres of land in Davis in 2010 where they put a 185,000 square foot factory – the largest non-residential structure in the city – which employs up to 200 workers, generating a huge amount in combined property and sales tax for the city.

But right now, it only has one such parcel available, and it lacks sufficient size to hold onto Schilling.

In 2013, Bayer probably would have preferred to have stayed in Davis, but they had no place to go and found a good deal to move to West Sacramento.  But don’t kid yourself, that was a big loss.  Bayer has since invested in their own innovation center in West Sacramento, pumping jobs and revenue into that community.

But if there was nothing Davis could have done about Bayer at that time, Davis was fully warned by Tyler Schilling that they needed land for their expansion plans.  As I mentioned, we even got a reprieve when their expansion plans got delayed, but that is about to run out.

That will be a blow, a preventable blow that we could have avoided with better planning.

As Jim Gray said at the time: “There are clearly unintended consequences of the growth control measures that were designed to slow the community’s residential growth. We do need additional state-of-the-art buildings with competitive business infrastructure so we can compete effectively on the global stage. We need to continue to work collaboratively and competitively to attract and win our fair share of great jobs and world-class companies.”

This is the point that Danielle Casey made in August, when she noted that companies looking to come to our region are not considering Davis because Davis lacks the space.

That situation certainly has the ability to change, but it is going to be up to our leaders and ultimately the voters to make it happen.

42 thoughts on “Sunday Commentary: If We Lose Schilling or Other Major Companies, This Time We Were Warned”