In 2018, Jeff Reisig, a three-term incumbent who hadn’t even been challenged in 2010 or 2014 faced a little known public defender, Dean Johansson.  Surprising everyone, including myself, Mr. Johansson pushed the incumbent to the brink in a campaign that featured a battle between a prosecutor who has given lipservice but not deed to reform, against one who pushed the envelope on reform.

In the end, despite a nasty campaign that saw the under-financed public defender nearly take out the incumbent, Mr. Reisig prevailed by a narrow margin that stunned even the most optimistic of observers.

This is a scenario we are seeing over and over again across the country.  Tiffany Caban, a young public defender narrowly lost the Queens DA race.  In San Francisco, Suzy Loftus is the somewhat progressive establishment favorite in a pitched battle against public defender Chesa Boudin.

Writes the NY Times this morning: “Such a race could help define criminal justice reform.”

Against this backdrop, we have the Yolo County Supervisor race.  If anything this could be a proxy battle that repeats much of the 2018 DA election.  After all, one of the few issues that separate three-term incumbent Jim Provenza from challenger Linda Deos is the DA’s race.

Now they are returning the favor.  Dean Johansson has endorsed Linda Deos.  And Jeff Resig has endorsed Jim Provenza.

Jim Provenza, some will remember, was a long-time lobbyist for the Los Angeles County District Attorney’s Office.  You will recall he worked for Steve Cooley, who served as DA in Los Angeles from 2000 to 2012.  The Republican faced Kamala Harris in 2010 for Attorney General and lost.  He was preceded by Gil Garcetti (prosecutor of OJ Simpson and father of current LA Mayor Eric Garcetti) and followed by current DA Jackie Lacey. 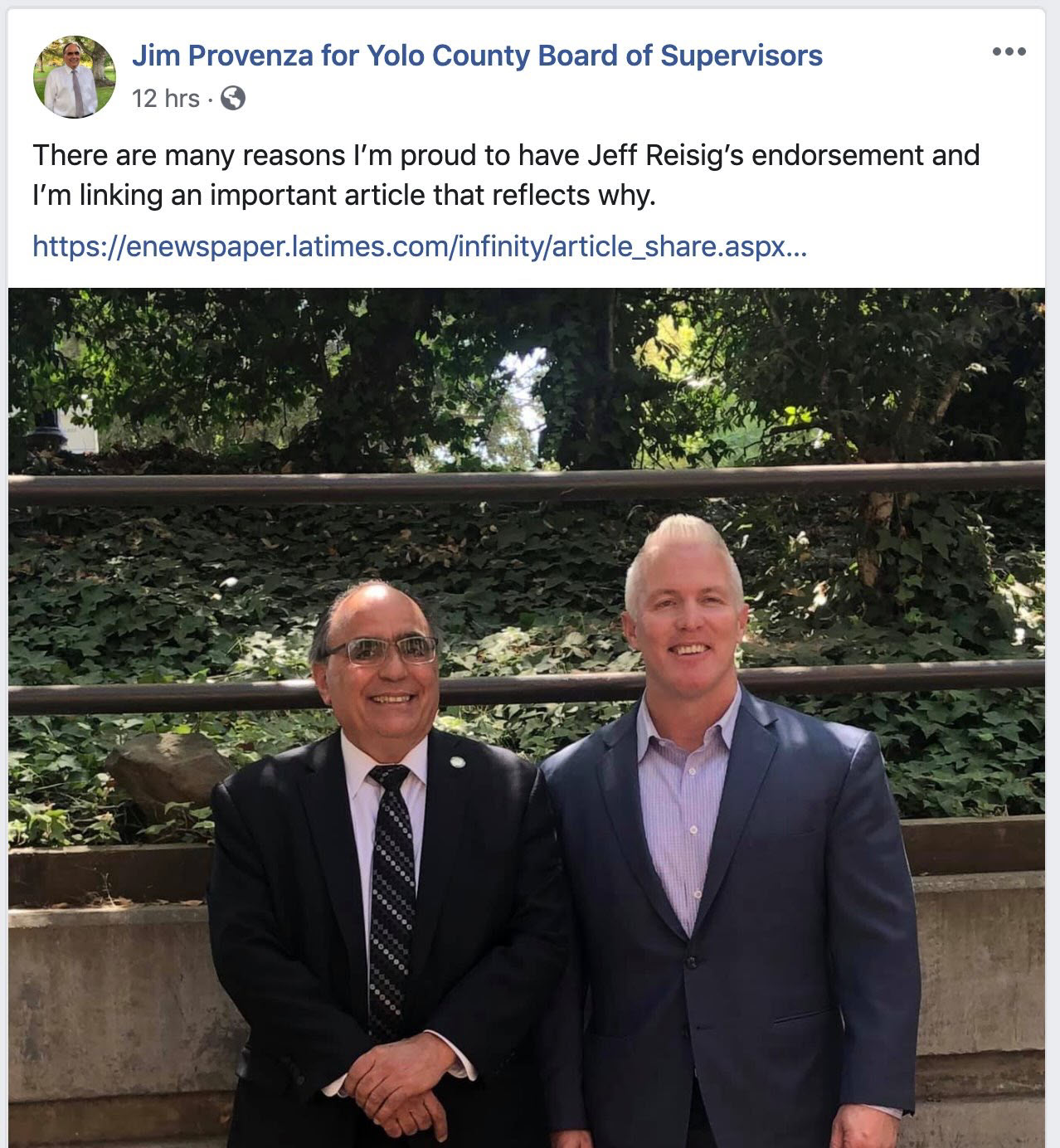 This week Jim Provenza posted this endorsement on his Facebook page.

The question we have – is this is a good move or a bad move for Jim Provenza to not only take the endorsement from Jeff Reisig but feature it prominently?

The DA’s race figured to play a role in this election simply because it is one of the cleanest lines of demarcation between the two candidates.  You can argue that Jim Provenza is making a mistake injecting a highly polarized figure into the race, when he is the incumbent and probably had supporters from both sides of the DA-race divide.

If you look at the math, the city of Davis went about 60 percent for Dean Johansson if you exclude four precincts in South Davis – all of which are in the Fourth Supervisorial District.  That gets Davis’ take to about 52 or 53 percent for Mr. Johansson in the district – add in El Marcero and the rural areas, and it becomes nearly a 50-50 wash.

One would be tempted to look at that math and argue there is no advantage either way electorally.

But they’d be wrong.

Let me explain why this is not a good idea for Jim Provenza.

Let us estimate that he came into the race with an inherent 70-30 advantage over Linda Deos on the basis that he is a 12-year incumbent, has a huge name recognition advantage and a strong base of voters.  Some might argue that that number is too high, but follow me here for the sake of argument.

Linda Deos wants to make this race about a few things – one is that she is a woman and there are no women on the board.  But also she wants to run to Jim Provenza’s left.  She wants to argue that she is the real progressive and Jim Provenza is too conservative.

The reality is that on most issues we are probably not going to be able to distinguish the voting record of Jim Provenza from that of Linda Deos.  But the DA is one of the few real sharp differences.  And Jim Provenza is now taking his immense electoral advantage and tying it to the polarizing figure of Jeff Reisig.

That is a huge advantage for Linda Deos because it puts people who support Jim Provenza but oppose Jeff Reisig in a bad position.

Jim Provenza is hitching himself to a weaker candidate who is polarizing, and thereby giving Linda Deos the inroads she needs to try to make this race a referendum on the current district attorney.  In short, he is handing her a way to get into this race that she may have lacked previously.

Will this have legs?  Hard to know.  Jim Provenza has a long track record of his own and his support may be solid enough to overcome this.  But he has now opened the door to an issue that can give Linda Deos traction.  We will see if this one has legs.