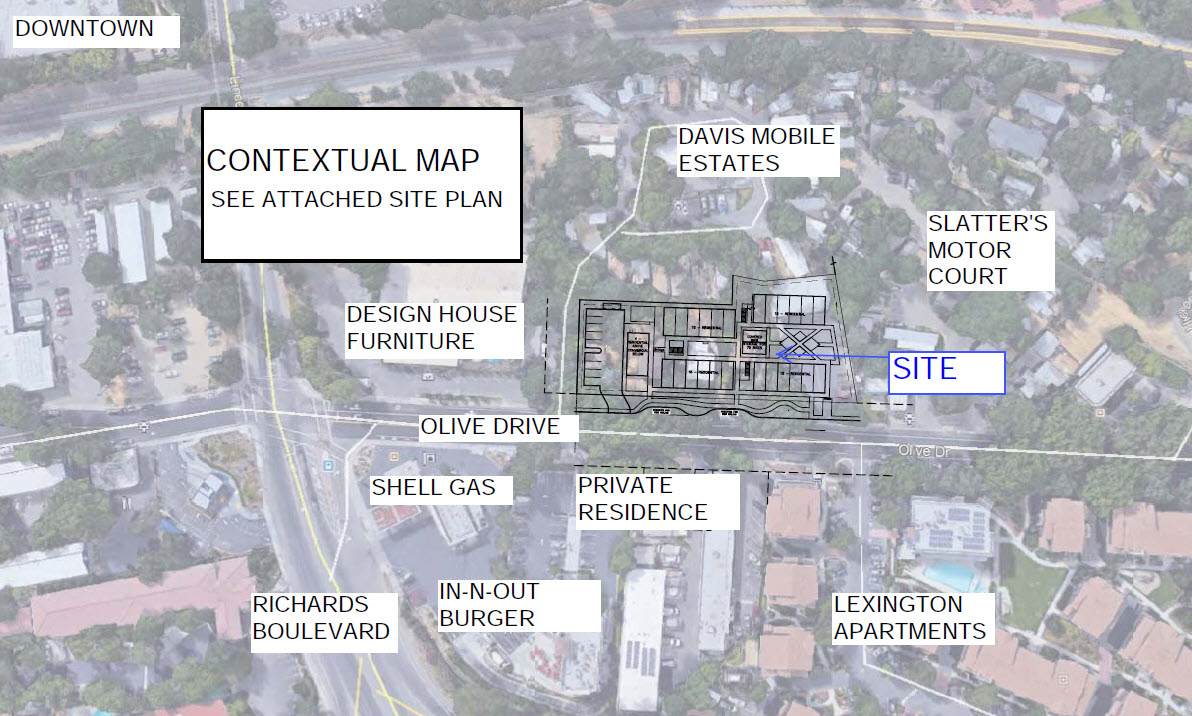 On Tuesday, the council approved an item, placed on consent, approving a resolution that would authorize Raney Planning to provide an environmental analysis for a mixed-use project located on Olive Drive on five parcels from 1031 to 1055 Olive Drive.

The item drew several public commenters, most of them complaining about process.  Colin Walsh during the main public comment asked the city to specify under what conditions items should be placed on consent, and wondered if it was appropriate to do so when the item was just introduced and seemed to elicit community input and response.

Colin Walsh said, “It’s not just a case with this item that it’s been placed on consent calendar, which in itself is a problem.”

He also noted that the city had failed to put the documents of the project on its website or the agenda.  By Friday around 3 pm, after emailing City Manager Webb, he received a link to the city website where all of the documents were finally uploaded.

“The project application was stamped, August 7, the city received it August 7 and failed to make it available to the public until it was requested on Friday – the Friday before this meeting,” he

stated.  “Part of what is not routine here, part of what is controversial is the city’s failure to make it available to the public.

Eileen Samitz has many concerns about the project, and she said, “It’s really an unrealistic proposal.  It’s nothing short of being absurd what’s being proposed here.”

She pointed out the number of units being proposed “with five parking spots for 72 bedrooms” and “there will be commercial there (with) four parking spaces.”  (It’s actually 76 bedrooms).

“This is not workforce housing,” she stated.  “You cannot expect 72 bedrooms to be workforce workers and relying entirely on transit, particularly on Richards Corridor.”

She said, “Davis does not have the public transit system to support something huge and high density, especially at this particular area.  It’s one of the worst choke points in the entire city and it’s only going to get worse when Lincoln40 comes with its hundreds of people.”

Councilmember Lucas Frerichs noted, “This is the beginning of the process for this… it starts the process in motion, it is not the approval of the project.  It simply authorizes the ability for environmental analysis to begin on it.”

Councilmember Will Arnold had questions about the rules for the city’s process.

“What choice does the city have here to move forward with environmental analysis?” the councilmember asked.  “If I was a project proponent and I wanted to for example take City Hall and turn it into a ten story casino and open air gun range on the roof, the city council would likely summarily deny the project and say we have no interest in it – is that generally correct?”

Mike Webb responded that summarily denying such a project would be within the council’s purview – in part because it’s city-owned property and the applicant would not have ownership stake in it.  The city as property owner must approve of the submittal of an application in the first place.

He explained though, “Generally speaking under California land use law when you have an application for land use entitlement proposed to the city, the city has an obligation to a certain level to review and undertake review of that proposal and bring it forward through a fair hearing process for consideration and analysis.”

He said, “The exception to that can be when there is a general plan amendment that is proposed – the city council is not obligated necessarily to undertake review of that proposal.”

That would be one case where the council has the ability to decide whether to bring such an application forward in the first place.

Councilmember Arnold said, “There are fairly narrow circumstances in which we can choose not to move forward with environmental analysis on a project proposal.”

He added, “And this is not one of those circumstances.”

City Attorney Inder Khalsa noted that when a private property owner comes forward “they actually have a state law right to apply to develop their property.”  That doesn’t mean that the city is obligated to approve their project but they do “have a right to file an application and as part of that application we do have to undertake environmental review under state law.”

Will Arnold said, “So this begins analysis of the project – it doesn’t necessarily move project approval forward.”  He said that “we are compelled to do it by law, it costs us nothing because the developer – (it ) is part of their fees.”

He said, “Has an item like this ever not been on consent?”

Mike Webb said, not in terms of authorization for environmental analysis.

“That fits my definition of routine,” said Will Arnold.  “This is a routine action that we are compelled to do, but compels us to do nothing.”  He concluded, “I disagree with the assertion that this does not belong on the consent calendar.”

Gloria Partida would add, “It’s very difficult to smuggle anything into Davis because our process is so robust.”

She likes engagement, but “sometimes it’s a little over the top.”

City Manager Mike Webb did acknowledge, however, that it was an oversight not to have uploaded the material for public perusal.