Nearly two dozen people spoke during public comment – there were fireworks on both sides of the issue, but this time the public was relatively split.  Council, as they have for years now, found the compromise – Alternative 10, the alternative that adds a signal at Montgomery, adds two northbound lanes north of El Macero, but preserves the bike path.

Adrian Engel from Fehr & Peers pointed out “some of the congestion can be mitigated with the solutions that we have, but all of it will not be mitigated.”  The key is there will be “freeway congestion that causes queuing onto the corridor.”

He explained that he and his team got onto the freeway during peak time to validate that the freeway was not the fastest way to get from Dixon to the Causeway.  Five of them traveled at the

same time through different routes to see if the apps and maps and Waze “were telling us the true story.”

Traveling on the freeway was indeed the longest time.  Some of the other routes “were definitely faster than the freeway.”  The fastest they found was Highway 113 and County Road 29 to bypass the queue.  They found that to be almost 15 minutes faster.

“There are multiple ways that can be used to bypass this freeway traffic,” he said.  “The software that’s giving you these alternate routes is true and we have verified are actually faster.  Ultimately the solution for this problem is going to fix I-80 and getting that traffic to flow better to keep cars on the freeway.  Because if you fix Mace or do something to Mace, it may just cause traffic to go in other places.”

She read, “While this project is not perfect, we see it as a great improvement in making our community more walkable and bikeable.  We agree some modifications may be needed.  However, we want to send a clear message about the different alternatives considered.  Please do not pursue any alternative for moving the concrete divider protecting people on bicycles from vehicle traffic nor alternative detracting from the safety of our most vulnerable citizens, pedestrians and cycles in the Mace corridor…”

Supervisor Jim Provenza expressed concerns on the part of the county.

He said, “The ability to be able to transport agricultural vehicles from one side of the freeway to the other is important to our county’s agriculture and our agricultural economy.”

He continued, “I believed that two lanes in both directions was a done deal and it seems as if we’re drifting away from that.”  He said, “I am concerned with an assumption that the current configuration is somehow necessary to deal with the Waze app problem… that was a pre-existing problem that got much worse with the Mace Construction and the current configuration.”

Finally Brandon Hurley spoke, “This all started with restoring Mace Blvd. and then we get the guy in the fancy suit and all this good stuff to fix the traffic on Mace Blvd.  It’s Waze – Waze is part of life.”

He added, “I think the bottom line that all of us would like is to have two lanes on either side of Mace Blvd. and a way to get the kids to and from school.” 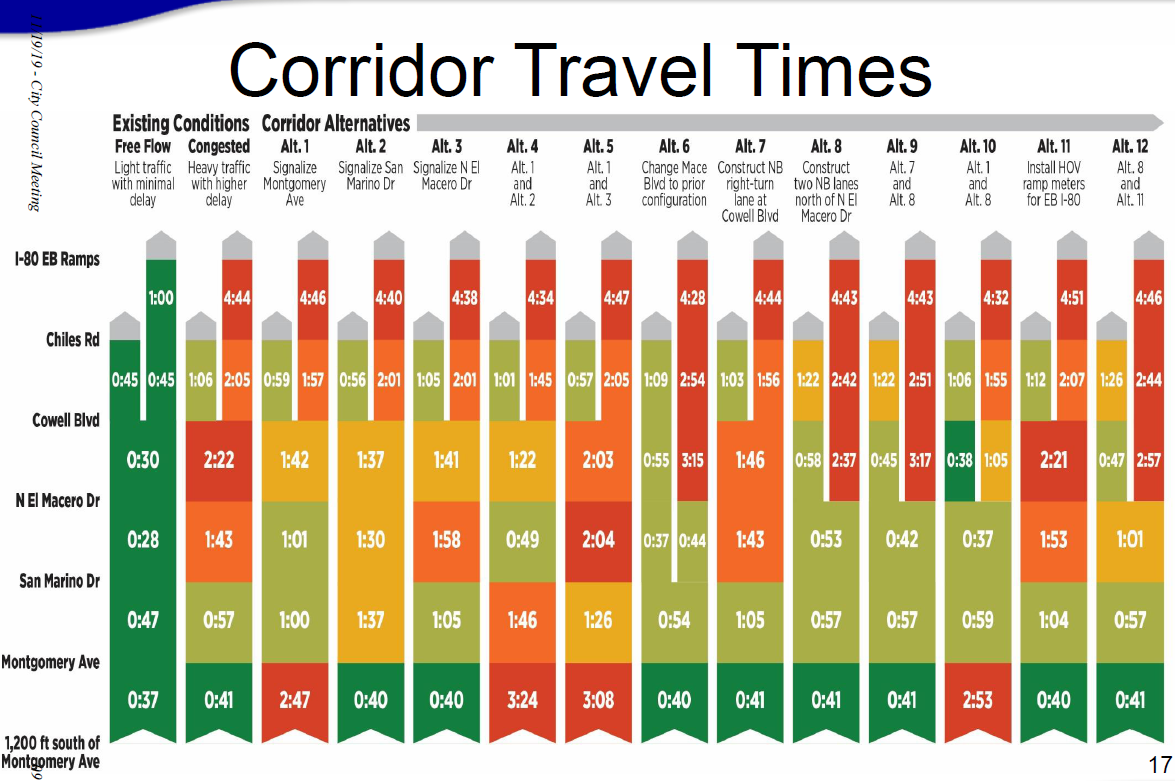 Following the break, Mayor Brett Lee took his prerogative and spoke first, landing on Alternative 10 as his ideal choice, where he was joined by the rest of council.

“I’m struck by the fact that we have people asking us to delay,” the mayor said.  “I’m anxious so we can move forward and work on the fixes that we know we need to make.”

“We had this corridor that had much lower traffic volumes and in the past five years it has dramatically changed,” he pointed out.

Before, he said, prior to the traffic studies, “we’d just be winging it – and we’d risk making another error.”  He said, “We need to get this right.”  He said, “So the fact that we’ve taken the time to get this information – yes absolutely.”

He noted the interesting dynamic – less dramatic on this night than at previous outreach meetings.

“There’s this… tug of war between bikes and cars,” he said.  “It misses the point.”

He said that the bike advocates are saying don’t change it, “all the traffic is about Waze and Interstate 80 and you can’t do anything about that.”  On the other hand, “Just tear it all out and make it go back to the way it was.”

He notes that the chart above shows that the “prior design did allow for a greater volume of traffic flow with reduced amount of delay compared to the current situation.

“Alternative 6 does show an improvement,” he said.  “It’s not all about Waze.”

But he notes, Alternative 10 “is actually an improvement over the way it was.

“We have enough information to direct staff to pursue some alternative,” he said.

Mayor Pro Tem Gloria Partida explained that Alternative 6 “does save time, but it only saves two minutes.

“I went out there on a busy day and I drove both sides,” she explained.  She noted that the north side of Mace “is a mirror image of what it used to be.”  There are four lanes and free right turns.

“There was about a three minute difference,” she said.  “I sat in traffic on both sides of that.”

She said, “Traffic is just as backed up… on the north side.”

The council ultimately voted 5-0 to support Alternative 10.  They will implement 30 percent of it and then have a public meeting to evaluate it.

30 thoughts on “Council Goes with Compromise on Mace – Back to Two Lanes, Keeps Protected Bike Path”