“I don’t care who people vote for as long as I can pick the candidates” — William M. “Boss” Tweed

My friend David decried a candidate primarying our local Congressman, Ami Bera. I said “But Bera is just a corporate Democrat!” David countered: “What’s wrong with ‘corporate’?” David often says Democrats should hedge their bets, so he deplores dissenters who might threaten Bera’s reelection.

But working Republican strategies do just the opposite. Kochs will fund a primary opponent for any congressman who steps out of line. That means they get extraordinary compliance with their right-wing agenda while, in the spirit of Boss Tweed, they move the Overton Window–the range of respectable public policy options–ever rightward. Remember when the Ronald Reagan was a right-wing nut job, at least in conventional thinking?

So is it really so terrible to have someone to the left of Bera like Jeff Burdick primary him? Won’t that provide a corrective to the sins of the corporate Democrats?

What sins? Here are a few from Thomas Frank’s Listen Liberal: Whatever happened to the party of the people? (Note: Frank was immediately shut out of U.S. mainstream media that had previously published his work after that book.)

Jimmy Carter deregulated trucking and airlines, showing Reagan how to do it, and voiding the labor contracts unions had negotiated in those industries. The Teamsters endorsed Reagan in the next

Bill Clinton colluded with Newt Gingrich to “end welfare as we know it,” throwing a half million adults off of food stamps. Before that, 76% of those needing public assistance got it. After:26%.

So Democrats are no longer the party of the poor. For lagniappe, Clinton deregulated Wall Street, and had a deal with Newt to privatize Social Security. Monica Lewinsky interrupted privatization, and a lucky thing too. Imagine what would have happened to retirement savings if they depended on Wall Street, which tanked a few years later.

Incidentally, David thinks welfare recipients were abusing the system when Clinton tossed them under the bus. For a little perspective, the Federal welfare budget is a rounding error compared to the spending for corporate tax breaks, military hardware, and things like Social Security and Medicare. David’s rhetorical tactic here is known as “Straining at a gnat while swallowing a camel.” Meanwhile, the growing population of homeless testifies that welfare is at least underfunded now.

Obama, another corporate Democrat, oversaw the recovery from the Great Recession produced in part by Clinton’s deregulation. Notice how the graph shows the bottom 90% of incomes were actually worse off than before the recovery: 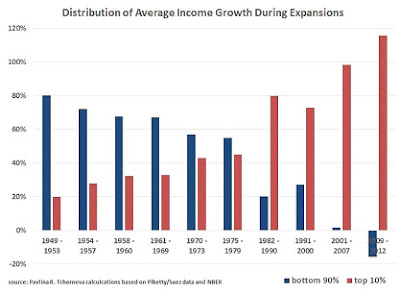 Obama had a choice: either save Main Street, or save Wall Street. He chose Wall Street even after it committed what is arguably the largest theft in human history (U.S. net worth declined 40% in the wake of Lehman’s bankruptcy). Those financial crimes essentially remained unprosecuted by the Obama administration.

Obama didn’t prosecute the war crimes of Bush / Cheney, either, but he did promote the torturers and prosecute the whistleblowers (more than all previous administrations combined). Corporate Democrats Hillary Clinton and Joe Biden voted to tighten bankruptcy before the collapse, in addition to supporting the war in Iraq, the biggest foreign policy blunder in U.S. history.

In the context of those actions by the corporate Democrats, it’s not hard to understand why the population voted “with their middle finger” to elect Trump. And not just Trump, Democrats also lost nearly 1,000 down-ticket races too. The Kochs ran the table!

OK, let’s admit that Bera is better than his Republican opponent(s), and votes with environmentalists 85% of the time, according to the local Sierra Club’s president. Nevertheless, locally, constituents are dissatisfied because he broke with his party to vote for a trade bill fiercely opposed by labor unions. He has done enough to dissatisfy local party members that he is unable to get even the endorsement of his home town’s (Elk Grove) Democratic club.

My personal dislike of Bera’s policies stems from two issues in particular: His unwillingness to support Medicare for All, and the way he promotes austerity. These are related, so let’s take the last one first:

Locally, Bera actually sponsored a “budget workshop” from former Nixon Commerce Secretary Pete Peterson’s Concord Coalition. The stated objective of this “workshop” was to reduce the Federal debt. The actual objective was to poll for acceptable ways to reduce Social Security and Medicare (no tax increases were discussed).

Remember, the Federal Reserve (“the Fed,” our central bank) makes the money, and will never run out. According to its own audit, the Fed gave Wall Street $16 – $29 trillion in credit in 2007-8 to make “orderly markets” (note: no tax increase necessary, and “printing” all that money caused no inflation)… but we can’t afford anything that actually benefits the population. “Eeek! Social Security is running out of money!” is a constant refrain in the corporate press.

So Bera is supporting austerity. Furthermore, he even responds to questions about Medicare for All with his concerns about how we might afford it. Yep, that’s the question: “How will we afford something that is uncontroversially about half as expensive as what we’re paying now?”

I don’t know whether to be offended by the insult to my intelligence, or to marvel at the kind of hypnotic trance that afflicts the American public taken in by the propaganda that we can’t “afford” cheaper things like Medicare for All, or the Green New Deal. Just FYI, in World War II, the government took over roughly 50% of the economy. For the Green New Deal, it would only need 5%.

So…that’s where we stand. I’d say Bera can use a primary opponent if only to make him support more sensible policies rather than the corporate line. If David had his way, though, we’d simply have to accept second rate public policy, and suck it up to handle current conditions.

What current conditions? Never mind the climate, 40% of the population can’t deal with a $400 emergency without selling something or borrowing. Sixty-five percent of seniors have only Social Security (that both Clinton and Obama tried to cut) to fund their retirement. How bad does it have to get before we do something different, or sanction dissent?