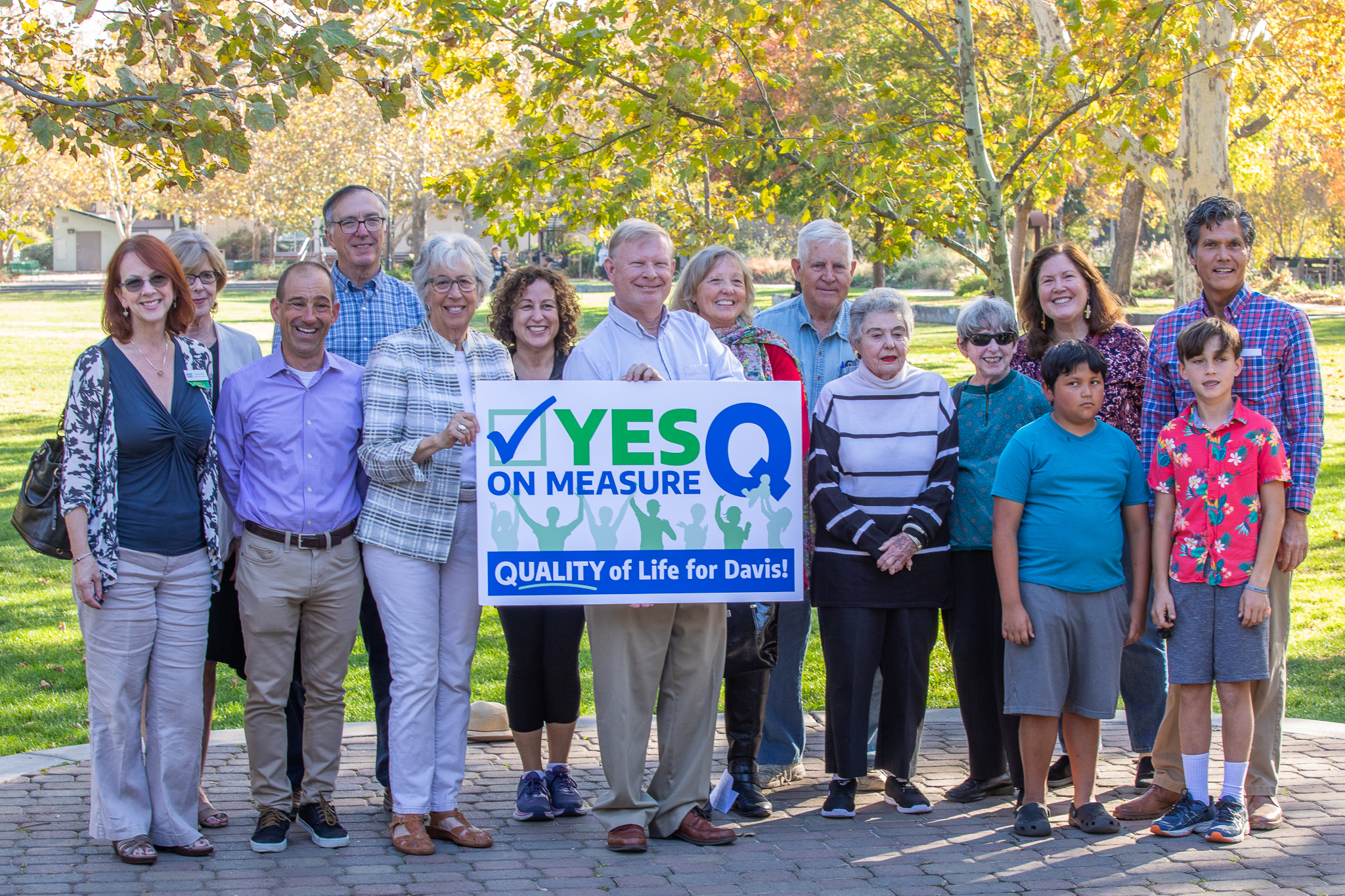 Mayor Brett Lee, Former Senator Lois Wolk, Councilmember Dan Carson and many others gathered in Central Park on Friday afternoon as they held a press conference to support Measure Q, the renewal to the sales tax which would continue a one percent local tax and will be on the March 2020 ballot.

Former Senator Wolk, also a former Mayor of Davis among many other positions held over the years, noted that Measure Q stands for “quality of life.”

“(It) provides about $9 million to our general fund,” she said.  “It is essential that we renew this tax so that we can preserve the character and quality of life in our community.

“Davis is a wonderful place to live, to study, to work, to recreate,” she added.  “Bruce and I came here to Davis, we worked here, we chose to live here over 40 years and we chose it because it’s an extraordinary place to raise a family.”

Senator Wolk said it is an community that provides “an extraordinary array of opportunities for all of us in the community.”

She said that for our grandchildren to continue to enjoy Davis, “we need to renew the existing tax.  Remember it’s not a new tax, it’s a continuation of the existing tax that was passed in 2014.”

Mayor Brett Lee said, “There are several things that make Davis a nice place to live – it’s the involvement of the community but it’s also the ability of the city to help sponsor and create opportunities where the community can be involved.”

He noted the setting of the press conference – a nice, clean, safe park – and said, “Measure Q is supporting the existing sales tax that we already have.  It’s not a new tax, it just continues the same tax level that we’ve had over the past years.

“No tax is going to be easy to either pass or renew.  So it is important that we don’t just assume that the public knows all the nice things that this sales tax does for this city.”

Mayor Lee noted, “An important aspect of the sales tax is that it cannot be taken away by the state.  All this money remains in the community of Davis.  The one percent increment represents about 15 percent of our General Fund.”

He added, “The General Fund covers about two-thirds of the costs of maintaining our parks and our recreational programs.”  He said, “This is a very important component of what makes Davis nice.”

He noted some recent crimes in Davis that were “shocking.”  He said, “We frankly want those things to be shocking to us.  We don’t want to be one of those communities that just goes ‘oh well’ just another crime here in Davis – these types of things should be extraordinary… and we should not accept them as the status quo.”

One of the priorities in Davis is to recruit and retain quality police officers “and in order to do that we have to have the funds to do so.  It’s important that we work hard to maintain the high quality of life that we’ve come to expert here.”

“A good supporting piece of that is to have this sales tax renewal,” he concluded.

Joe DiNunzio, a member of the school board, spoke on behalf of the Davis Chamber of Commerce.  He will be the chair of the board next year.  He announced that in September, the Chamber board unanimously endorsed Measure Q.

“We feel very strongly that this is critical for our community,” he said.  “Our ability to attract and retain businesses is focused on Davis having a high quality of life.  Having good police, good fire protection, having good streets and a safe environment for people to conduct business.”

Mr. DiNunzio said, “Measure Q is critical to our ability to do that.”  He added, “We have a high degree of confidence in our partnership with the city that the city’s finances are very well managed and that this is our only option to move forward to have these adequate services.  At the end of the day, a healthy business community with jobs and services are important to a healthy community overall.”

Sheila Allen, a former school board member and a member of the Measure Q campaign committee, said “you always cross your fingers about what letter you are going to get” with respect to ballot measure designations “and when we were assigned Q we could not be more excited… it speaks to what this sales tax is all about, it’s about maintaining the quality of life in Davis.”

She explained, “What it does is pay for some of the very basic things that help to improve and enhance and continue the quality of life in Davis.”

A poll released over the summer showed 77 percent of likely voters would approve renewal of the tax.

City Manager Mike Webb at a recent council meeting noted, “The loss of that tax revenue… one hundred percent of our one cent tax stays local, it doesn’t get shared with the state or elsewhere.  Roughly $8.6 million of our roughly $66 million general fund.  Suffice it to say that loss of that revenue would be fairly catastrophic.”

He added, “I have little doubt that it would have a significant effect on every department.”

The sales tax will be on the ballot for March and require a simple majority to renew the measure. 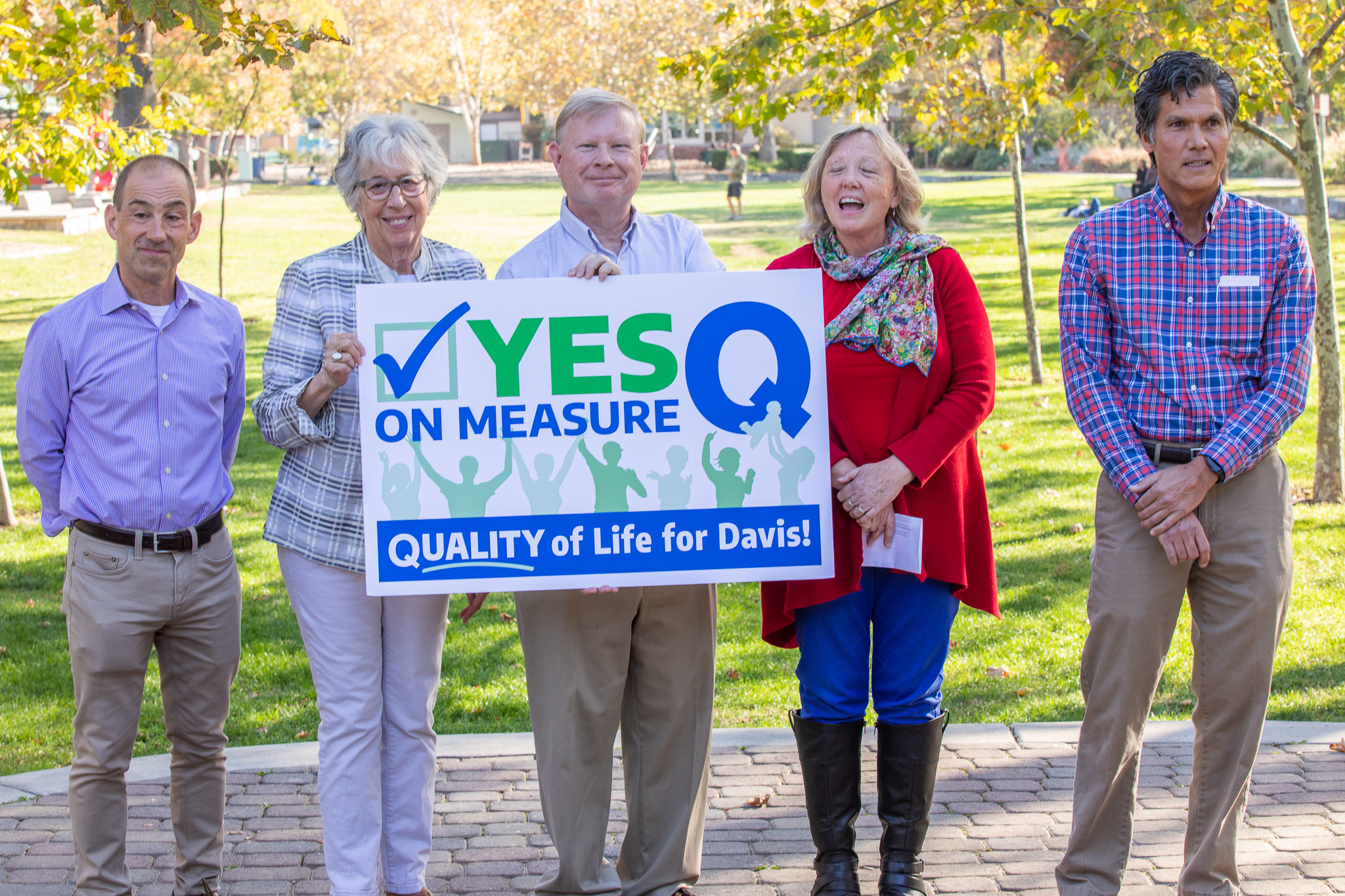