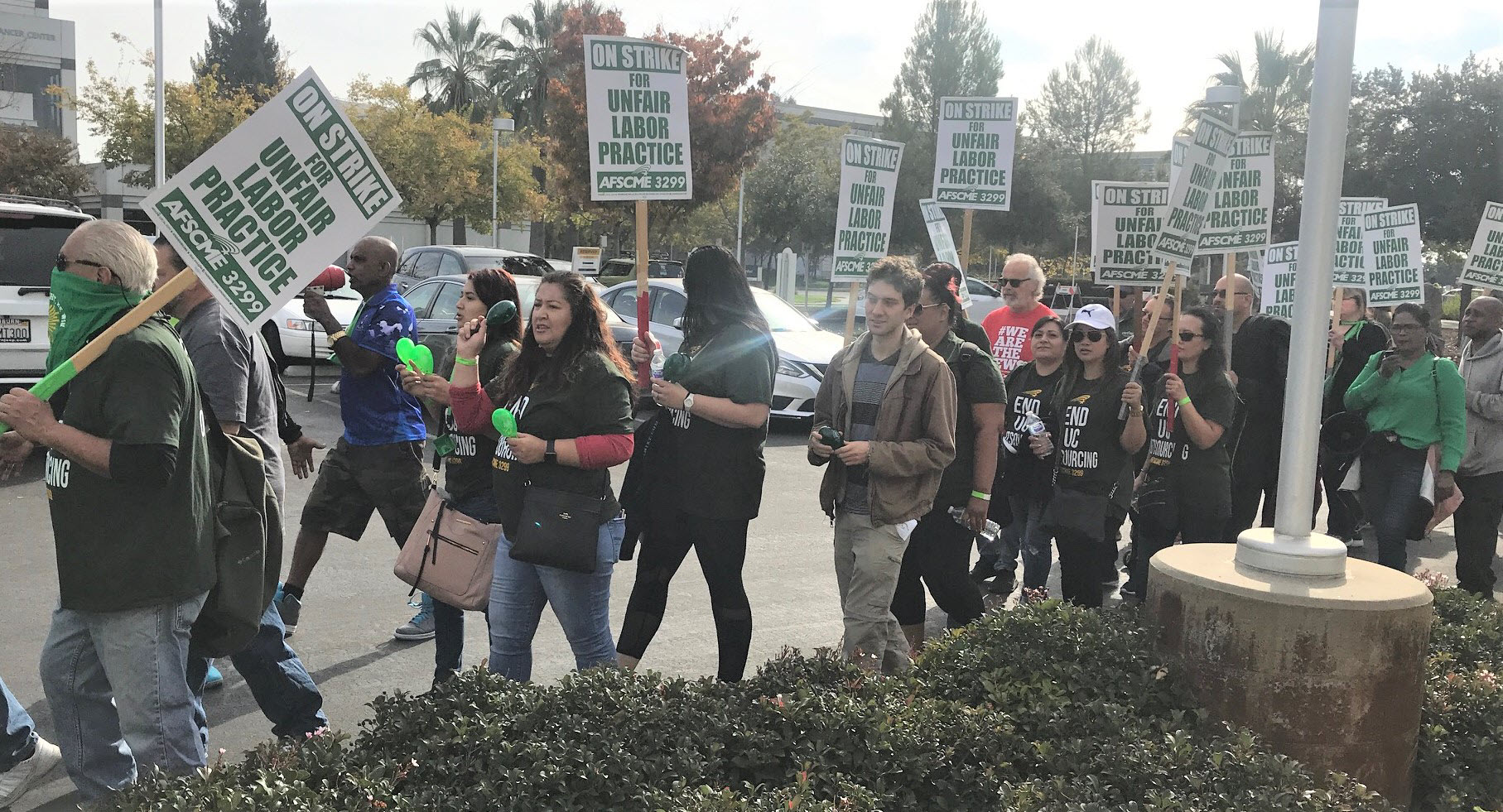 The American Federation of State, County and Municipal Employees (AFSCME) Local 3299 said patient services were not affected because at any time there were enough workers to provide services. In case of an emergency, union workers would leave picket lines as necessary, the union said.

Documents published by the State Legislature, according to press statements by AFSCME, show that UC has increased its spending on outsourced campus service and patient care jobs by 52 percent since 2016, and 84 percent by UC Medical Centers.

• Entered into or renewed no fewer than 25 contracts with outsourcing companies, and then secretly amended many of those contracts to expand their scope and terms without notifying or bargaining with affected university employees.
• Amended outsourcing agreements to exempt at least one contractor from UC’s own minimum wage policy—even though the vendor was previously required to comply with the policy.
• Unilaterally exempted itself from the University’s own competitive bidding rules in order to extend and expand outsourcing contracts longer than 10 years without notifying affected UC employees—in violation of UC’s internal policy, its collective bargaining agreements, and state labor law.
• Used secret contract renewals to evade internal requirements that require UC to stop outsourcing work through contracts designed to save money on wages and benefits that would normally be afforded to university employees performing the same jobs.
• Refused to notify AFSCME 3299 of RFPs involving outsourcing of union-represented jobs, and refused to bargain with affected workers. 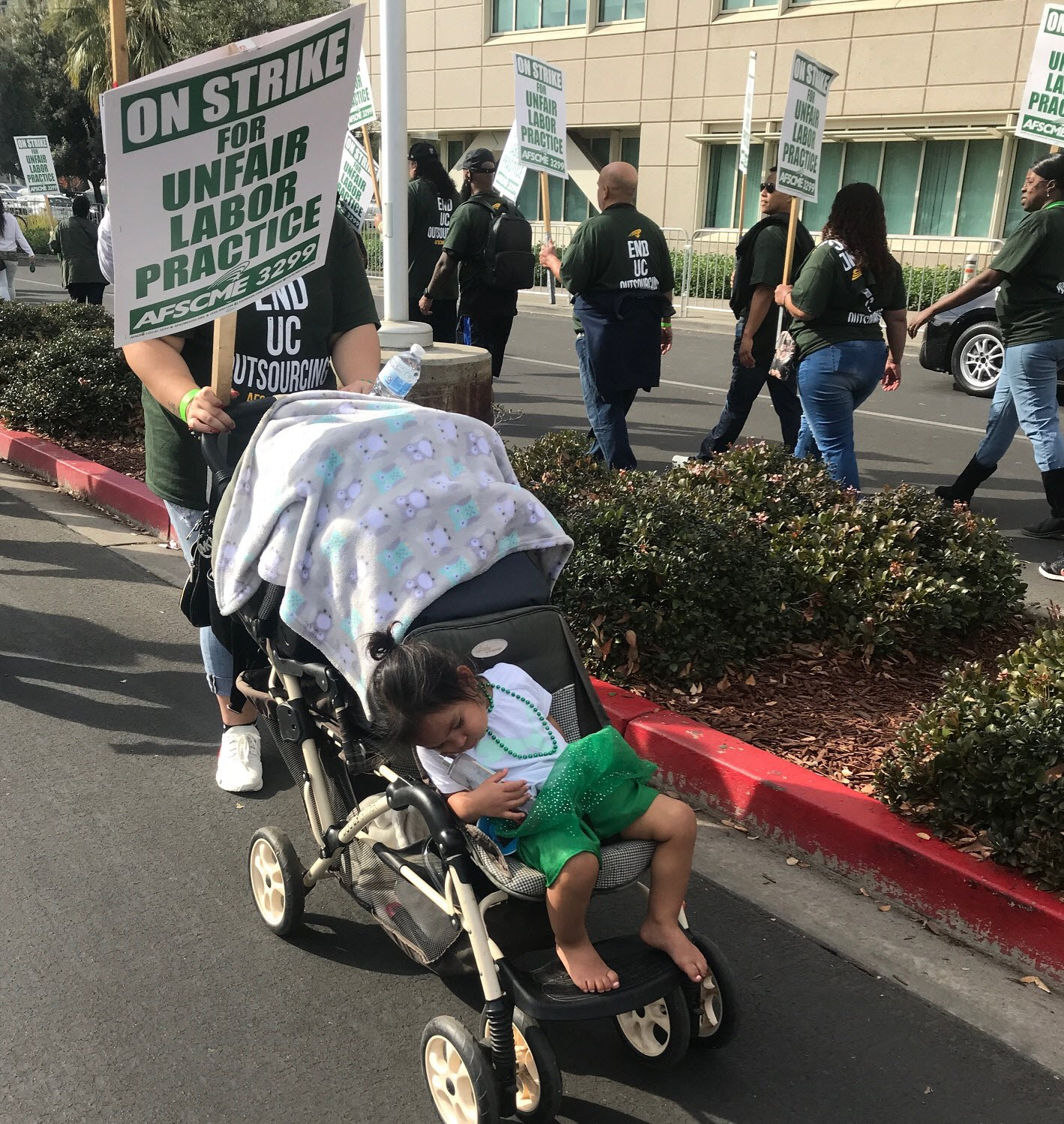 Lybarger added, “What is so troubling about UC’s continuing illegal conduct is that it’s becoming even more prevalent. It’s past time for UC to change course and treat all of their workers with the respect and security we deserve.”
AFSCME 3299 said Wednesday it has proof that UC has “circumvented” its competitive bidding rules to avoid negotiating with its employees, including security guard work at below UC’s own minimum wage policy

“We will not rest until this lawlessness stops,” De Leon said.

According to the union, a 2017 State Audit found that UC was “displacing its lowest paid career employees in favor of private contractors that pay their workers substantially less.”

And UC disclosed to state legislators that it has “increased its spending on outsourcing jobs normally done by UC service and patient care employees by 52 percent since 2016.”

AFSCME also charged that workers most targeted by outsourcing are disproportionately Black women and people of color – these direct outsourced workers are, said the union, already paid as much as 23 percent less than white men doing the same job, and more than 50 percent less than regular UC employees. And Black workers at UC, said AFSCME, “face a higher risk of involuntary job displacement.” 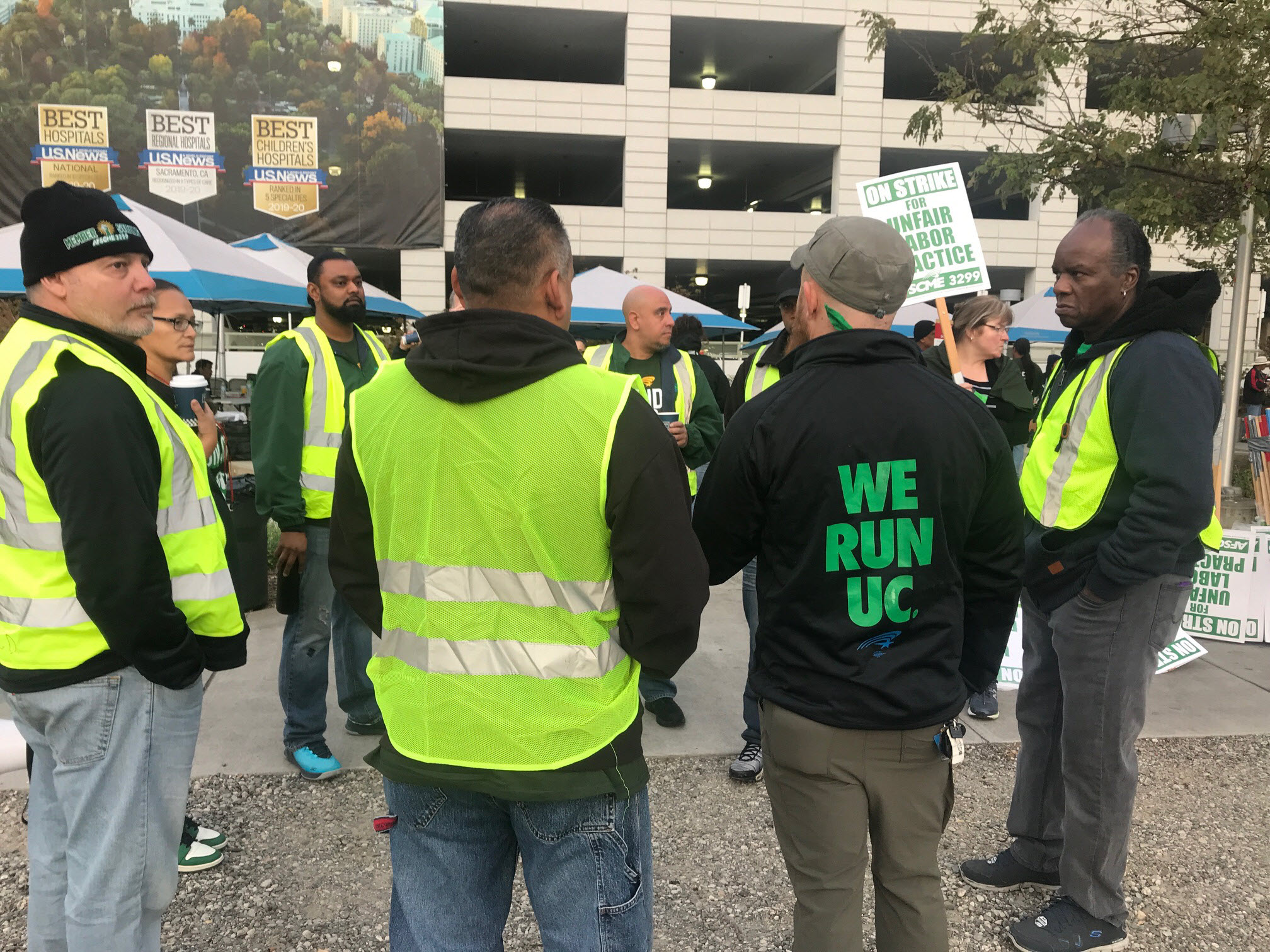 The UC Board of Regents is considering, according to the union, a proposal to generally prohibit contracting for services, that “reflects the University’s commitment to value and protect its employees by prioritizing the use of its employees to perform functions and services whenever possible; to provide equal pay for equal work such that contract workers performing work for UC will receive wages and benefits equivalent to what the University provides its employees for performing the same work; to provide those who have performed contract work for the University on a long-term and continuous basis the opportunity to become UC employees; and to serve as a model employer by mirroring the State’s contracting requirements under California Government Code Section 19130, and, whenever reasonable, exceeding them.”

As of Wednesday evening, there was no official word that the Regents had adopted the policy. In any case AFSCME released this statement:

“Over the last several years, thousands of UC service and patient care workers have stood together to expose the university’s unfair, unsafe and often illegal outsourcing of UC jobs. Now, after years of dismissing the problem and the racialized inequality it creates, the Board of Regents is finally acknowledging the need to change course. That’s progress, but the devil is in the details.

“A ‘policy’ isn’t worth the paper it’s printed on unless it is actually enforced. UC service and patient care workers are striking across the state…because when it comes to outsourcing, the university has not enforced its own policies or even followed state law. Instead, they’ve issued vague statements while secretly expanding and accelerating the practice.