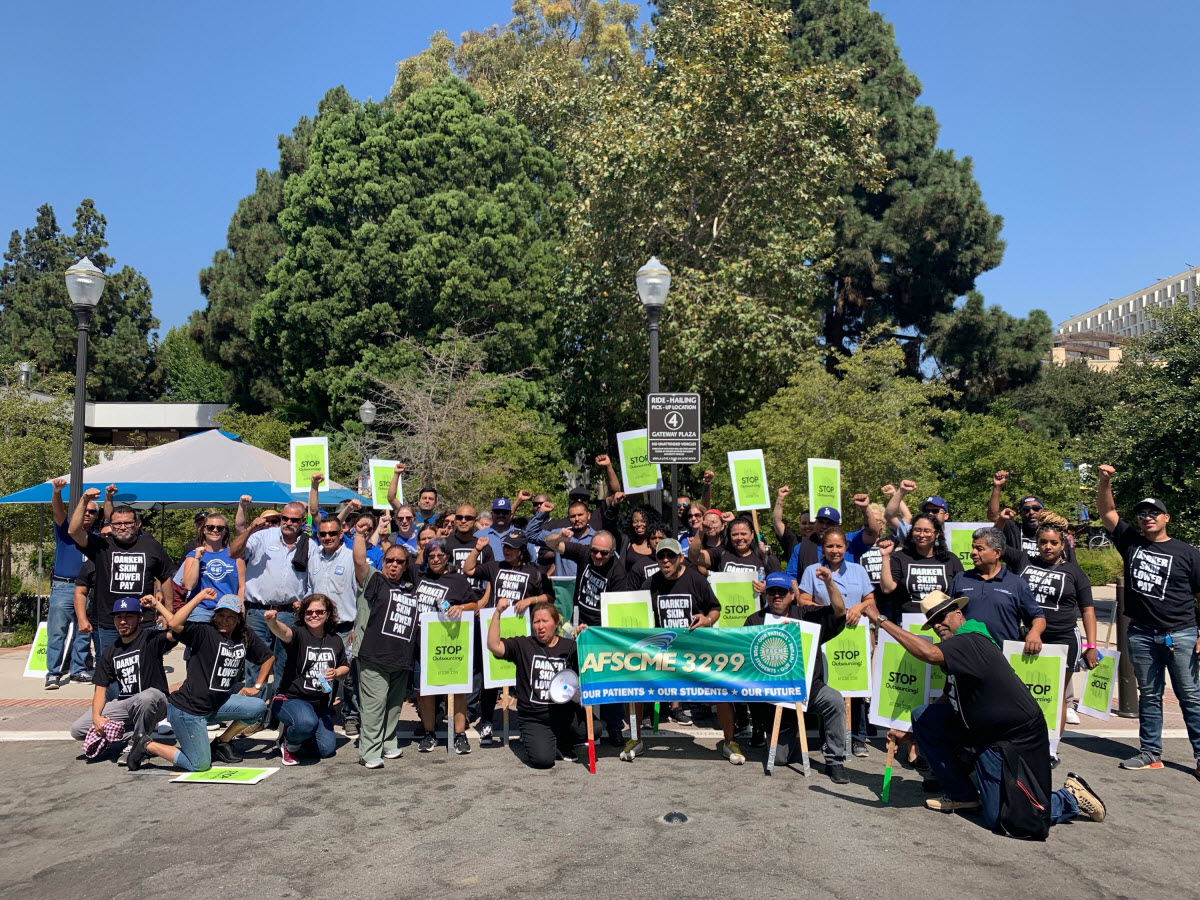 The notice follows six new ULP charges recently filed against the University over its efforts to outsource jobs normally performed by UC employees to lower wage private contractors.  Specifically, the charges detail how UC has worked to secretly expand outsourcing by circumventing legal disclosure and bargaining requirements, as well as the university’s own competitive bidding and minimum wage policies.

California’s Public Employment Relations Board (PERB) has already found sufficient evidence to issue a formal complaint against UC on one of the charges—alleging potential violations of state law.

“By secretly working to expand outsourcing of service and patient care jobs, the University of California is unilaterally imposing lower wages, more inequality, and more risk of employer abuse against its most vulnerable workers—mostly women and people of color,” said AFSCME 3299 ULP Committee Member and UC Irvine Hospital Unit Service Coordinator Monica De Leon.  “This is not just

morally bankrupt, unfair and unsafe for the students and patients who depend on the work we do—it is illegal. And we will not rest until this lawlessness stops.

Authorized by AFSCME 3299’s ULP Committee, UC Service and Patient Care Technical Workers will strike in response to these ULPs at all 10 UC campuses and five Medical Centers on November 13th.  Picket times and locations will be announced in the coming days.

A 2017 State Audit, entitled “The University of California Office of the President- It Has Not Adequately Ensured Compliance With Its Employee Displacement and Services Contract Policies,” have exposed a range problems with UC’s outsourcing practices.  These included the University extending or renewing contracts without competitive bidding and failing to follow its own policies for displacing employees in favor of contractors.

Subsequent internal UC audits and media reports have revealed other trends—including the University’s failure to enforce its own minimum wage policy for outside contractors, demands that contract workers accept arbitrary wage cuts, and well publicized incidents involving UC contractors who paid workers under multiple names in order to skirt overtime rules and other basic labor standards.

Recent research has found that the workers being adversely affected by UC’s outsourcing practices are disproportionately black women and other people of color.  As direct employees, these workers’ starting UC wages are already as much as 23% less than white men doing similar jobs, and as outsourced workers, they are paid as much as 53% less than regular UC employees. Research has also shown that African Americans at UC face a higher risk of involuntary job displacement, and their share of UC’s directly employed service and patient care workforce dropped by 37% between 1996 and 2015.

According to documents recently published by the State Legislature, the University of California has increased its spending on outsourcing of campus service and patient care jobs normally performed by university employees by 52% since 2016—and by 84% at UC Medical Centers alone.

Share:
Tags:AFSCMEOutsourcingUnfair Labor PracticesUuniversity of California
Previous : NAMI Yolo County to host gathering to discuss opioid use
Next : Why I Ride: A Conversation with Carlos Casillas